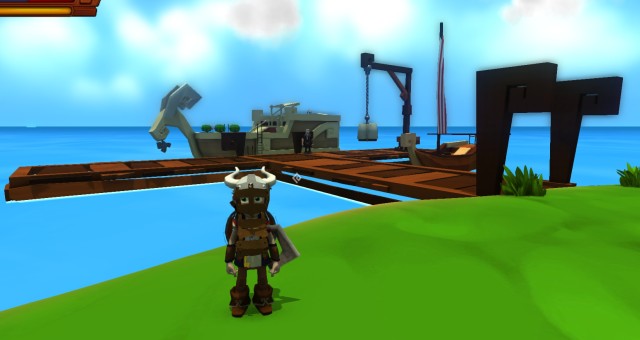 Cornerstone: The Song of Tyrim

Cornerstone: The Song of Tyrim is an open-world fantasy RPG published by Phoenix Online Publishing about a Viking boy named Tyrim who must brave the open seas to save his village. It’s customary for young Vikings to love exploring and adventuring but Tyrim has always been different. Instead of adventuring he’s always loved to build things, and his history of crafting items is well-known throughout the village. Even his friend Olof chides him at times for it since Tyrim has never left the island once. However, the Vikings begin to worry when all the men in the village leave to go on their usual expeditions but none of them return, including Tyrim’s father. Tyrim decides to investigate around the island gaining information from the other villagers, and he’s certain that something went terribly wrong for all the men who left the island. He’s told that only he can help them despite his inexperience off the island. One advantage Tyrim has is his resourcefulness but he’ll first have to track the whereabouts of those missing. What Tyrim doesn’t know is that the men’s disappearance is connected to a mysterious cult known as the Order of the Veil that has worldwide influence. Can Tyrim save the day or will he succumb to the same fate as the other men in his village?

When I saw open-world fantasy RPG I became curious about this game, and when I saw there was a crafting system I was extremely interested. I figured this could be a fun game with entertaining puzzles similar to adventure games that resembled it graphically. And with the catchy title screen music my expectations went up a little bit more.

I’m accustomed to opening game play tutorials that require the character to perform simple tasks in order to learn the basics and the Song of Tyrim was no different. I will admit I wasn’t terribly impressed at this point and not just because of the graphics. The graphical style was part of its charm but the tutorial focused on jumping and crafting a box in order to reach higher cliffs. The fact I messed up one of the blocks preventing me from having enough wood to advance had the greatest impact on my initial sentiment and it was eerily quiet. But once I reached the top and was introduced to the village my enjoyment would just keep increasing the more I played.

The first real quest was to collect some supplies in order to help Olof, who hurt his leg. This would require Tyrim to explore the village to collect these supplies and this was the first taste of the open-world environment. Yes, you can go anywhere you want and pick up additional quests along the way. However, you will have to memorize the map since gives no direction to the next objective nor is there a journal to select objectives. My question of where should I go next didn’t turn into frustration because it was actually entertaining to interact with the other villagers. The witty dialogue made Tyrim instantly likable, and a reference to a Jay-Z song followed by a humorous rebuff from Tyrim was just one of many surprising moments. The graphics may imply this is a kid’s game but the many adult references will surely go over their heads at times.

The crafting system was easily the most fascinating game play mechanic. It’s structured around 4 resources: wood, stone, wool, and fire. You can craft up to 24 items throughout the game using a combination of these resources if you acquire the blueprints for those items. Items range from a simple wooden torch to hang gliders, armor and various weapons. Some you’ll have to acquire to advance in the game while others are optional that you can acquire from exploring or completing additional missions. You’ll also have to fix structures such as ladders or bridges, and there’s a simple mini game that makes it more enjoyable while allowing you to save your resources if done successfully. There were some creative uses on the first island but even that improved once I acquired a raft and was able to explore the world at large.

Once I hit the open sea I really started to get into the game play mechanics. There was the sense of excitement and adventure considering how much it was stressed it was Tyrim’s first time off the island. There wasn’t much to see in the open waters aside from some debris or the occasional marine life after traveling a few times between islands. I was given a quest to locate a man who could build the best ship ever so I could travel north, which presumably had waters too dangerous for the simple raft to navigate. This is when puzzles started to become more complex and it was required to make extensive use of the crafting system. There were occasions where it was possible to run out of crafting materials but the resources were generally abundant or there were multiple ways to solve puzzles and navigate the different levels. A bigger problem at times was movement in general or the rare mechanical glitch that would make Tyrim get stuck in a slow animation. Overall the controls were consistent but nevertheless it was still frustrating when Tyrim would inexplicably slide off a flat surface if you didn’t move him for a while.

There was plenty of combat throughout this game after the initial island. The combat system consists of one strike and one block. However you can target enemies and Tyrim has a form of spider sense that warns when an enemy is about to attack so you can block and counter. And stealth does help when facing multiple enemies. Since this is a game where crafting is integral, Tyrim’s weapons and shields degrade the more you use them and there are 2 icons on the screen letting you know the health of your gear at all times. Even though the combat mechanics were simple I found combat to be pretty amusing. The enemies vary based on the island and you can always attack enemies using any object you can find on the screen. Plus the boss battles can become intense and require you to use your environment very well.

Is it Truly an Open-World RPG?

You can travel to the different islands in an order you prefer aside from the final one. Each island is unique and the interactions hold up in terms of not feeling like you missed a chunk of the story (although if you don’t try to venture north early then you won’t know everything you need to acquire ahead of time). On one island you’re windsurfing in the desert while on another you’re navigating in the mountains trying not to be blown off a cliff. So yes, it’s definitely open-world. If I had to say whether or not it was an RPG I would lean towards no, it’s not. You can increase Tyrim’s health permanently as well as resource capacity but all the changes to the character would fall under temporary boosts aside from the two mentioned. You can’t customize the character or increase stats, etc. This can be considered semantics since the term is used loosely in many cases but the answer to the bigger question of is engrossing or not is YES.

The story is about Tyrim trying to uncover the truth about the Order of the Veil in order to rescue the missing Viking men. But the scope of the story becomes much larger than that and each island comes complete with its own history, culture and is still ultimately tied to the initial quest. I was surprised about how deep the story would become with the introduction of an ancient people and their impact on the world. I actually cared about the fate of the people on every island so the quests and puzzles never felt tedious. (Unfortunately the disconnect between the islands made it possible that some crafted items were no longer useful). As the story progressed I kept wanting to know more about the Order of the Veil and their ultimate plot and thankfully the answers were worth the journey.

Cornerstone: The Song of Tyrim is a charming and fun adventure game that appears simple at first glance but like its title character has some interesting depth and delivers an entertaining result. The combination of the crafting system and various puzzles keeps the game play feeling fresh, and every island you have to visit feels unique and the humorous dialogue makes it a joy to interact with the characters you will encounter. The combat is fun and the boss battles are truly the highlights in that regards. There are some glitches with the game play mechanics at times so on more than one occasion the game felt somewhat unpolished but none that would ultimately prevent progress. This is a game I started out of curiosity but became an engrossing experience. I recommend this game.