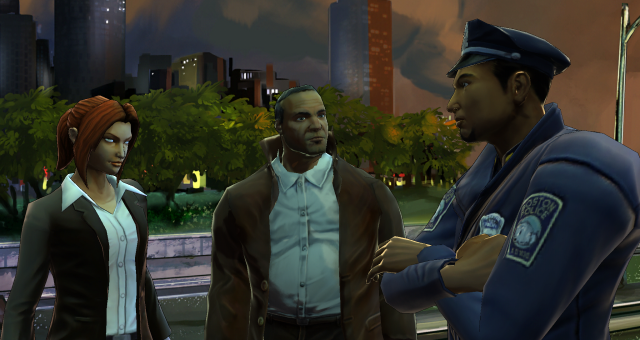 Cognition Episode 1 is the beginning of the story of Erica Reed, a FBI agent with incredible cognitive abilities as she strives to solve a series of murders and uncover the truth behind them. At the beginning of the episode Erica and her partner John McCoy are rushing to Mt. Auburn Cemetery in Massachusetts because of a text message from her father and a lead that someone known as the Cain killer has her brother. Obviously this would have her in a frenzy where she doesn’t even wait for backup. The Cain killer wants her to play his/her game and as she uses her cognitive abilities to break down the clues to go along with this twisted game she understands the Cain killer is already steps ahead of her. And as a result she’s, unfortunately, already too late to save him. Three years later and Erica still can’t come to terms with or solve the case of her brother’s murder. But her hands become full again with a new case that eventually draws her in personally in a way she wouldn’t expect.

Even though Cognition starts off with a very quick tutorial the game throws you right into the action with you having to find your way into the cemetery and unravel the actions of the Cain killer. It’s a point and click adventure or (touch and tap if playing on the iPad) that allows you to select any item on the screen or walk anywhere on the screen. Not every object is important and not every object gives you a description when you select it. The game does have a mechanism to help you see which objects on the screen are notable. For the objects that do matter you can either view, manipulate or use an item from your inventory on them. The inventory is very easy to access and you can examine inventory items closer, manipulate them or combine two items in it. This is all basic in terms of game play mechanics until you have to use your first cognition power in order to uncover clues and solve puzzles. 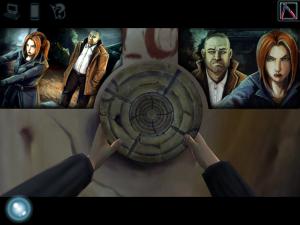 Cognition does an excellent job of setting the tone of the game early and drawing you into its world and wanting you to remain there. Yeah the opening scene and obvious importance of the actions you have to take play a huge role in that but the music early on stands out as well and captures the tense atmosphere perfectly. I had no prior experience with any of the characters yet I felt compelled to want Erica to succeed in these opening sequences as a result. The stylized graphics, which  resembled the page of a comic book at times added to it in a way I appreciated. It’s not all style as the cognition power, a game play mechanic, allows Erica to view a recent event that took place and even though it’s essential to solve puzzles it also allows the game to tell the story in an entertaining way.

But it doesn’t remain completely straightforward of course as Erica starts to have trouble with her abilities. It started when she was trying to rescue her brother and even 3 years later she has some trouble at a new crime scene when trying to use them. The new case (and the story in this episode) is a murder committed by hanging the victim, which causes Erica and her partner to wonder why the FBI was brought in. Apparently Director Davies has some information she hasn’t shared with them that would warrant the FBI being involved and when Erica tries to use her abilities at the crime scene she’s tormented by visions she can’t understand. After investigating the crime scene, her partner suggests to her someone who will be able to help her with her abilities and therefore what she’s been suffering as a result.

I won’t delve into details of the story in this review for obvious reasons but the premise mentioned above was very intriguing. And it worked perfectly as the story unfolded. Everything was tied into the game play. You can visit different locations on the map to perform different tasks, acquire necessary items or just to refresh your memory and see what you missed. 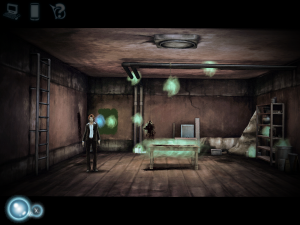 Viewing a scene with abilities

The puzzles are all tied to the story meaning there’s no puzzle that’s just there to have a puzzle and some are very challenging. It puts you in the mind of an investigator trying to gather clues and information to solve a crime and the story has very interesting twists. Sometimes you have to answer questions so you have to actually pay attention to what people tell you during the course of an investigation. And yes you also have to research information either through your phone or your computer in your office. The story holds up and the motives are all believable. Erica is a very appealing protagonist and worthy of carrying a series on her own. The other characters in the game serve their purpose and there is some entertaining dialog at times. However I found her partner John McCoy to not be very helpful aside from introducing Erica to the one who would help with her abilities and the occasional conversation recapping something that just occurred.

Where the game really shines is during the use of Erica’s cognitive powers. As the game progresses you unlock more of these and it can transform a crime scene or an interrogation into a thing of beauty. And even though this gives her a clear advantage over other agents it still requires you to think and solve even more interesting puzzles. And the way each new power was introduced made sense in terms of story and none of them felt forced. They either helped me understand Erica’s story even more or pulled me into events that affected other characters even more. Each ability is represented on the screen by a different color when you activate the cognition sphere. One ability can help see recent events connected to an item or person. Another called Projection allows her to project an object long after it’s gone if she has enough related items. And the third, Regression, allows her to relive her memories or other people’s memories to uncover information that would be impossible any other way. I can’t recall ever doing an interrogation in a game that was as enjoyable as it was in Cognition. 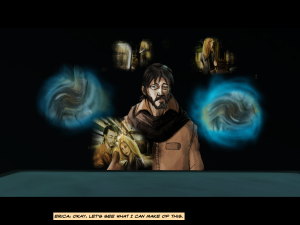 The only issue I had with this game was I would’ve liked some loading times and transition from a zoomed in scene to be reduced especially with having to go from location to location to see if you missed anything. That’s more a technical issue than an issue with the overall game. I played on the iPad so I don’t know if that’s the same on the PC.

Cognition Episode 1 was an extremely captivating and enjoyable game. From the opening sequences to the stunning conclusion I couldn’t put the game down when I had free time. The story was solid and had the perfect amount of suspense. The puzzles were challenging but fit into the game just right and were rewarding. Erica Reed is a great protagonist and her cognitive abilities add a layer of game play which takes storytelling to a new level. If you’ve ever played an old school adventure game such as Police Quest and enjoyed it then I’m almost certain you’ll love Cognition. It’s definitely not a rehashing of those games but a worthy progression of the genre. If you enjoy Indie games and you’relooking for a great story driven adventure with rewarding puzzles then I highly recommend this. If you’re just looking for a good game I recommend this. I can’t wait to get my hands on the 2nd episode because I’m now hooked to this series.