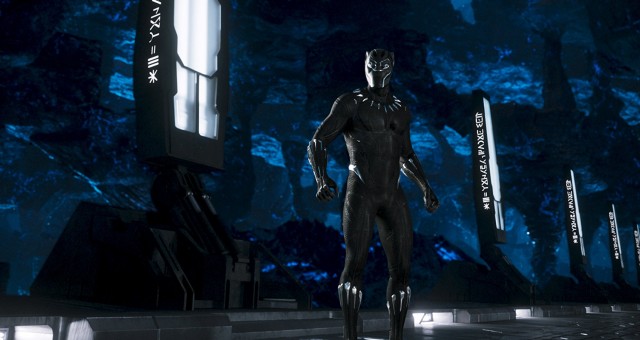 Black Panther is an action superhero movie produced by Marvel Studios and directed by Ryan Coogler. It picks up immediately after Captain America: Civil War with Wakanda in need of a new king following T’Chaka’s death. T’Challa, his son, is next in line and has to prepare for the ceremonial ritual to crown a new king. But there are many challenges ahead for him. Immediately after becoming king he receives intel giving him a lead on Ulysses Klaue. He decides to go after the man responsible for his father’s death as his first action as king. However, Klaue is working with a mysterious figure named Erik Killmonger. Who is this mysterious figure? And is T’Challa ready to rule Wakanda and confront its secrets?

We all know that out of all the big budget super hero movies none have generated as much hype as Black Panther. This was due, in part, to the cultural significance even among those who would state they’re really not into superhero movies. As a fan who loves the Black Panther and Wakanda mythology I went into this anticipating an excellent superhero movie but hoped to see one that was also aware of its greater impact on black culture. This was definitely a tall order to fill especially since there’s been so much excitement surrounding the film. However, Ryan Coogler successfully filled it with incredible world-building, moving character and story development, and satisfying action.

The opening sequence gave a simple taste of what was to come throughout the movie. There’s a brief introduction of the characters in an endearing way and filled with action. Like all superhero movies there’s the quintessential rescue scene showing the character’s capabilities. But this was the first indication that the movie wouldn’t shy away from the fact it was deeply rooted in Africa. Even though Black Panther took on Boko Haram briefly, they weren’t presented as just a simple boogeyman to defeat. The complexities were addressed slightly with Nakia’s brief explanation to T’Challa about the situation.

The movie thoughtfully explored its African roots from here. Its essence was perfectly captured in the visually stunning sequence displaying magnificent landscapes followed by the revelation of how Wakanda was perfectly hidden in the heart of Africa. It wasn’t only about the obvious but the beautiful intricacies in the movie as well. Yes this movie was about T’Challa as the Black Panther but it was also about Wakanda’s identity. It’s a struggle to define Wakanda in the context of the world at large due to its advanced technologies, quality of life and all around dopeness. Enter Killmonger, the most memorable MCU villain to date.

Killmonger working with Ulysses Klaue, the only man to successfully steal vibranium from Wakanda, had his own vision of the use of vibranium in the world at large. I won’t give anything away about his backstory but I will say that I loved how he became a fully fleshed out character. Their plans not only directly conflicted with the established status quo in Wakanda but challenged it in a way that wasn’t just simply presented as black and white.

Similar to Captain America, the hero is more than just an individual endowed with special abilities. The hero represents and protects an ideal while still confronting the ugly truths present in that society and among the leaders. Clearly, the difference for T’Challa is that he is also a king, and bears all the responsibilities of being one. 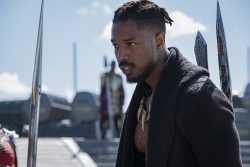 The individual performances were riveting and that made me care about the characters. Wakanda’s world-building was stunning from the visually beautiful set pieces to the introduction to its customs and traditions. During some scenes I found myself lost in my imagination as my eyes feasted on the buffet of amazing imagery. The various tribes had their own views of Wakanda from the Jabari tribe to the Border tribe. And none of this was overbearing for a first movie. I also loved the subtle hints about Wakanda’s history being more complex than T’Challa’s initial understanding. I hope that this is explored in future movies. So as a result I felt invested in the fight over Wakanda’s future.

This issue of Wakanda’s future was wonderfully interwoven into various characters’ personal journeys. The way this was handled was one of the main reasons this movie was everything to me. The film didn’t shy away from the question of what was Wakanda’s role and responsibility to all that has happened not only in Africa but the entire world when it comes to war, famine and injustices. For example, if Wakanda had the capability to stop the transatlantic slave trade why didn’t it do so? But what else should Wakanda have addressed? How far should or could it go without losing its own traditions? But should those traditions be preserved if its unable to help anyone else in the world? Of course the likelihood of weapons proliferation was present so any effort that started out as noble could be easily corrupted. All of these aspects kept this issue entertaining and engrossing with the way the story unfolded.

Last but definitely not least, Black Panther does represent a milestone in terms of representation. I’ve been to so many movies where there wasn’t even one black character among the extras in the background it became distracting to look for that representation. For me to see so many beautiful, strong, and intelligent black characters in every scene was simply inspiring. The overall cast was outstanding, and there wasn’t one character who I didn’t appreciate. From the humorous moments to the profound revelations, they nailed it. And I couldn’t be happier.

Words can’t fully capture how much I love this movie. It’s truly a memorable experience that introduces you to a marvelous land, and makes you care about the characters and the issues they face. I appreciate a good story, and this one unfolds in an entertaining manner. The fight to define Wakanda’s role, i.e. the nature of its king, in the world can be enjoyed on so many levels. It’s an African story, a human story. It’s a Marvel story. And it’s Wakanda Forever. 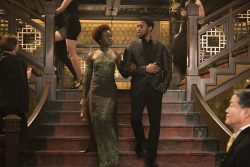