Batman v Superman is a superhero movie directed by Zack Snyder and is the sequel to the Man of Steel. It picks up 18 months after Superman’s catastrophic fight with General Zod in Metropolis. It was the first time a battle was ever waged on that scale, and even though Superman was protecting the city from Zod and his world engine, he’s still associated with the mass destruction by some. One such person is Bruce Wayne, aka Batman, who raced to the city when he heard of the destruction taking place because there was a Wayne Enterprises building located in the middle of the battleground. He’s not able to make it in time to help evacuate the building and he’s all but helpless as he watches it come crumbling down causing multiple casualties. Fast forward to the present day and their paths cross once again when Batman’s investigations of one known as the White Portuguese leads him back to Metropolis. And since Lex Luthor sent Bruce Wayne an invitation for a huge gala for Lexcorp he has the perfect cover to be in Metropolis. However, Lex Luthor has other plans in the aftermath of the destruction of most of Metropolis and it involves the body and technology of the deceased Zod. Can either Superman or Batman uncover Lex’s secret plan or will he succeed in pitting the two against each other?

I have to admit that I enjoyed Man of Steel overall. It wasn’t perfect and I had some issues with some of the choices Superman made early on in the movie (i.e. watching a tornado) but I was looking forward to another movie taking place in this same world. Heading into this movie I wasn’t sure if I was more concerned with the trailers spoiling huge moments so they wouldn’t have the same impact when watching them for the first time or the way the movie would eventually pit Batman against Superman. I figured there were so many ways the latter could happen *cough* cloning *cough* that it wouldn’t take away from the characters or overall story compared to the potential spoilers. Even though both worries were confirmed while watching this movie, the disappointment I experienced was due to many other factors. And as a result I hope the deep potential in the world DC is trying to put together isn’t lost due to the bad storytelling in this movie.

I have to state early that there were many things I enjoyed about Batman v Superman. I think the acting was stellar although I didn’t like Lex Luthor’s portrayal. And there were some pretty cool moments and Easter eggs scattered throughout so there’s plenty of fan service. However, gone are the days where just seeing ones favorite superheroes on the big screen is enough to generate excitement even if the story is trash. And too often Batman v Superman had too many moments that would’ve been cool as an Internet teaser but had nothing to do with the story at hand. I know the plan is to build a movie franchise but this movie suffers from the weight of trying to set up way too many movies/storylines at the expense of a good story here. So let me backtrack for a minute because the story started off really good to me.

I enjoyed the setup that had Bruce Wayne witnessing the Wayne Enterprises building being destroyed and helping some people on the street in the immediate aftermath. It was easy to understand why Bruce would feel Superman was a threat to everyone when seen from the perspective of those on the ground. So when Senator June Finch would work with Lex to an extent it was understandable why some would feel a deterrent or some form of control was needed for Superman. (It didn’t make sense how Lex was able to bribe a subordinate nor was any backstory given to shed light on the extent of Lex’s influence.) So I was into the story and the initial meeting between Bruce Wayne and Clark Kent at Lex’s party, especially when Diana Prince, aka Wonder Woman would show up with her own motives making everything more intriguing. There was a mystery surrounding Lex that involved his activities with the military industrial complex intent on framing Superman to bring him down as well as his research with Kryptonian technology. All of this would’ve been enough to build on for a great movie but the emphasis became on squeezing as much DC lore into the script as possible in the worst way that it detracted from the movie at hand and made me feel disappointed in what it became.

The story wouldn’t unfold in a manner that would bring these different elements together in a way that was captivating nor would it delve into the character development in a new meaningful way. This movie would resort to dream sequences one after another and then a character cameo that in another movie would have been a great moment but didn’t fit at all here. This was the beginning of multiple internet teaser scenes being compiled together and being called a movie as opposed to building on an actual story. None of this could’ve been considered to be just for hardcore fans because then there would’ve been no need to show Batman’s origin story, which everyone already knows. Yet the take on that origin scene in this movie was actually powerful when compared to other movies. But every time there was one of these scenes or an Easter egg it made me wish this were a different movie based on one of those scenes or Easter eggs. For example, when I saw Bruce Wayne walk past a Robin costume with a message from the Joker on it I immediately wished this movie was a Batman movie based on A Death in the Family story line because I thought it would be excellent with this Batman. Or a Superman movie that had a great story with one of his many villains not the standard choice of Lex Luthor or Zod that challenged him in new ways while showing his connection to Metropolis and its citizens. I could think of all these scenarios nothing was happening in this movie. There was no action for the majority of this movie related to the actual story line. 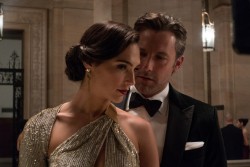 And I actually became angry during this movie and not because of the long lull of anything entertaining happening but because of the tremendous potential being squandered. I don’t know if it was just bad storytelling or the desire to set up way too many movies in the worst way but justice wasn’t done to any of the epic comic book story lines touched on this movie. When I saw characters literally watching multiple video clips of other characters I knew for certain it was doing too much. Dark color tones don’t equate the mature handling of issues raised and the inconsistency of Superman’s hearing or Lex Luthor creating a horrible scheme in the middle of the city with zero supervision showed that clearly. It was frustrating how Lex accumulated so much power and intel without explanation or goal. Instead of Batman fighting Superman for the brief period of time and using that as justification to bring the characters together this movie should’ve instead created a threat too big for one of them to handle alone because then there could’ve been more action representative of the characters spread throughout the movie.

When the action did start it was pretty entertaining, story and character inconsistencies aside. There’s a Batman action sequence that I would say was arguably the best Batman sequence on film that combined his hand-to-hand combat expertise with the use of his gadgets when dealing with enemies. Yeah it didn’t make sense that the Batwing was ridiculously loud on a “stealth” mission or that he killed probably dozens of people but that was just another one of the character inconsistencies. And the subsequent battle with Doomsday that involved Superman, Batman and Wonder Woman was intense however I still didn’t feel invested in the overall movie because of spoilers I won’t give away. Well that and I don’t want the ending of this review to be as long as the ending sequence in this movie after the final fight. 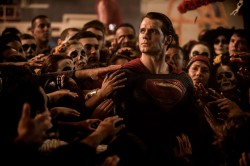 Batman v Superman: Dawn of Justice is a disappointing conglomerate of some of DC’s epic story lines and makes me question the purpose of this movie considering all the squandered potential in those story lines and Easter eggs. The amount of fan service, which is actually inconsistent with the characters, reaches absurd levels when characters in the movie sit and watch on TV characters who will be in future movies. The story in this movie suffers greatly and is a slow crawl to the inevitable and forced fight between the two title characters. I’m not one to advocate unnecessary movies but this one shows that patience is a virtue and the franchise would’ve been better served by having more than one movie address these story lines instead of a wack conflict between Batman and Superman. Justice wasn’t done to the characters or the associated story lines but I still hope this doesn’t signal the death of a franchise.