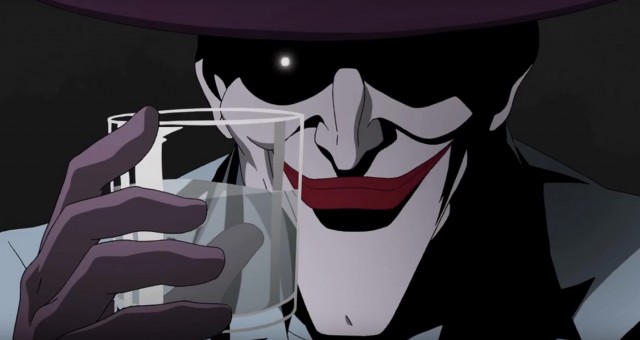 Batman: The Killing Joke is an animated film produced by DC Comics and is based on the graphic novel with the same name. It opens up with Barbara Gordon, aka Batgirl making her rounds when she comes across a crew of robbers tearing through the city. The cops are unable to apprehend them but with Batman’s help the two of them are able to capture one and gain some leads. They discover that the ring leader is Paris Franz, the nephew of a big-time mob boss who has bigger plans than just being a bank robber. He takes joy in his twisted games and Batgirl becomes his latest obsession when she tries to apprehend him during another robbery. He’s almost successful in taking her down while taunting her but she’s able to lock herself inside the bank vault until help arrives. Seeing how Franz has affected her, Batman tells her to stay away from this case but that only infuriates her even more. Things go from bad to worst when Batgirl is baited into a trap set by Franz getting caught in the middle of his war with his uncle and almost getting killed in the process. Meanwhile, Detective Bullock discovers a crime scene that bears an uncanny resemblance to the Joker’s handiwork, so Batman wants to pay him a visit in Arkham. It’s Batman’s belief that one day one will ultimately have to kill the other. But what pushes someone to that point?

“This wasn’t supposed to turn out boring.”

One thing about feelings of nostalgia when it pertains to memories of comic books as a kid is how easy it is to not remember (or be aware of) problematic aspects of a story line. I remember when I read the Killing Joke it seemed to be about the fundamental question of what could push a person to an extreme. The comparison between Batman and the Joker revealed that they were actually similar in ways so what was it that made Batman a hero who refused to kill but the Joker a villain who reveled in killing? And caught between the two was Jim Gordon, the commissioner who despite all the horrors he witnessed still wanted to do things by the book. So the Joker’s targeted attacks on the Commissioner was an attempt to prove anyone could be broken and become just like him. And of course this put Barbara Gordon in the controversial position of serving as just another plot device.

This movie not only missed the mark in making any of this interesting but the greatest offense wasn’t that it was boring. It was contrived, misogynistic and ended up being the worst DC animated film in recent memory. I figured there would be some modifications to the story to make it into a full length film, and I was curious about how Barbara Gordon’s character would be handled. And after about the first 20 minutes I was disappointed. Not only did the opening act feel completely unconnected to the second half of the movie but to have Batgirl struggle with what did amount to a relatively small time criminal and make the decisions she did didn’t help. If the goal was to give her more screen time to build up her character in a positive way so she would be more than a victim it failed. I didn’t expect her to be on the same level as Batman, of course, but then it became perplexing when she had to save him from the same people. So by the time this part of the movie was done I was completely unengaged and confused about where it was going.

The remainder of the movie would stay truer to the source material with the Joker kidnapping the Commissioner, shooting and torturing Barbara and then inviting Batman to an amusement park for the final showdown. However, this movie never got the right momentum after such a disjointed start. And worse, the Joker’s backstory came off as laughable instead of engrossing and tragic. Compared to more recent portrayals it paled in comparison since it wasn’t framed successfully in the context of one bad day pushing a man over the edge.

There was some entertainment value in this part of the movie but as the Joker would say seemingly breaking the fourth wall, ” This wasn’t supposed to turn out boring.” Gone was the striking contrast between the two characters. And there was no suspense or intensity attached to the Joker’s attempt to break Gordon and show that everyone can be pushed over the edge so the story felt flat. The action sequences weren’t even exciting at this point and were just run-of-the-mill sequences. And sadly none of this felt climactic. And the ending, which I won’t give away,  was frustrating since it lacked a certain ambiguity. And again, that was a result of the way the story unfolded. And for a minute I felt the laughter was directed at me because of the time spent watching this. And that’s never a good feeling.

Batman: The Killing Joke is a disappointing movie that not only fails to drive home any of the intriguing aspects of the original story but somehow finds a way to be even more controversial and misogynistic. The opening act featuring Barbara doesn’t portray the character in a good light, and the story wanders aimlessly because of its weird contradictions. And the disconnect between the opening act and the remainder of the movie feels so vast that it’s very difficult to feel engrossed or invested in the struggle between Batman and the Joker. I admit this was a movie I was looking forward to so it’s sad to state that this is probably DC’s worst animated movie.