Bankshot #3 has Marcus King confronting his old foe, the Dutchman, not realizing he walked into a trap. Ever since he learned in Tunisia after his experimental treatment that he had special abilities, not much has been able to hold King back. Those same abilities allow him to cut through swaths of the Dutchman’s elite soldiers with ease. They throw everything at him to no avail. If he’s not using his super speed or strength to take them out quickly, he uses his armor to render their attacks useless.

When he first acquired these abilities he was concerned about any side effects. The only one he noticed was his inability to sleep. And since he’s the only test subject with such a high dosage there was no history to reference. But since the Dutchman is working with the doctor responsible for King’s abilities, has King finally met his match? And how were they able to get the drop on him after all these years of him being the most feared man in the world? 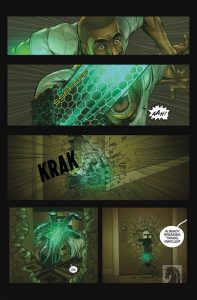 This issue focuses more on action so the flashbacks were kept to a minimum. However, this wasn’t necessarily a bad thing because it was a beautiful thing to be able to see Marcus King’s capabilities. Crisscross’s artwork was wonderful once again. King was so feared because not only was he bulletproof with super speed and strength but he didn’t need to sleep. And since the writing has inspired me to have confidence in the story, I still expect the remaining answers to be good.

I wondered how King’s organization and personal life could be infiltrated so easily last issue. It was all too simple even with the Dutchman involved. This issue addressed that briefly with Reggie questioning how this enemy was able to find the various locations. Yet somehow I felt better about it because of the subtleties in the flashbacks. My theory is pure speculation, but since the story has been unfolding in an engrossing way, I still believe there’s more to everything occurring than meets the eyes. 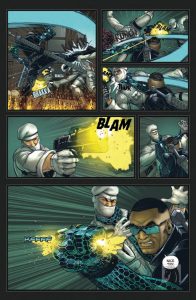 The final part of this issue unfolded in a not so surprising way. It was still good because it was the logical next step in the plot against King. The best thing was that it was still entertaining. I won’t give away any of the events but they created a highly intriguing situation. I want to enjoy the issue for what it was. However, the conclusion to this issue was a huge set up for my view of the overall series. It could either lead to an overly simplistic ending or an extremely satisfying one. My guess would be the latter.

Bankshot #3 is an electrifying, action-packed issue. It puts King’s full arsenal on display in brilliantly drawn panels and clarifies why he’s so feared. Flashbacks occur less compared to the first two issues but the implications in the flashbacks could have more potential. With two issues remaining I have high hopes for the rest of this series. And I can’t wait to see what happens next.