Bankshot #2 continues with Marcus King moving forward with his plan to get revenge on the one known as the Dutchman. It opens up 10 years ago in North Africa right after Marcus was left for dead. He was shot in the back and left paralyzed. Luckily he was found by some Bedouins, who were able to bring him to a hospital. Here is where he meets Soraya, who watches over him daily since he’s now a paraplegic.

Marcus’s outlook on life has changed drastically. It’s not just due to his current situation but because of his view of the last mission. He’s visited by someone from the U.S. embassy so he can be debriefed. However, when he shows the man what he was able to retrieve during the mission the man attempts to kill him. Once again Soraya saves his life by intervening and knocking out the mysterious man. She’s not fazed by this but knows Marcus can’t stay in the same location. Who was this mysterious man? And why was Soraya willing to help Marcus? 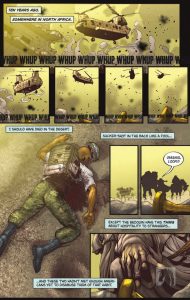 I felt the flashbacks last issue detracted from the more interesting current events. This issue rectifies that almost immediately by getting right to Marcus’s recovery and introducing Soraya. The Company man’s assassination attempt on Marcus wasn’t surprising but the result was entertaining. When Soraya would explain the situation to Marcus and bring him around the facility it felt like a true introduction to the path leading Marcus to his current situation. I was engrossed in the start of this journey due to the characters and what they wanted to teach Marcus.

Even the current events became more intriguing overall. This was started with Frank, the one FBI agent still determined to get Marcus. I appreciated how Frank wasn’t turned into a caricature. This was due to Pete being introduced in the way that he was. But the real treat was Alex De Campi building on the layers to Marcus’s character in the present. He was shown as untouchable in the first issue but this one makes him entertainingly complex. And I wanted answers to obvious questions like “why was he no longer in a wheelchair?” “Did he have any abilities?” 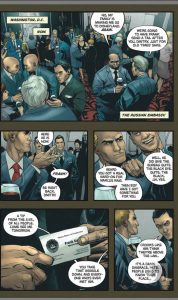 The last part of this issue really took things to the next level. Plans were set in motion and there were a few twists. Flashbacks can be cliché but they were so entertaining here I couldn’t tell if I wanted to see more about the past or present. I was feeling completely satisfied. Not because I had enough but because I knew there was more to come. There was one part I felt was accomplished too easily considering how careful Marcus King was purported to be. However, I won’t give away any spoilers and the story definitely became more engrossing. And if that wasn’t enough, the last page is shockingly good.

Bankshot #2 is near perfect in the way it builds on the first issue. The flashbacks are not only entertaining but beautifully woven into the story so the present becomes more interesting. And the character development is outstanding. There’s not much action throughout the issue but the ending is a wonderful example of how quality over quantity matters. Now I’m starting to believe this series is the real deal.