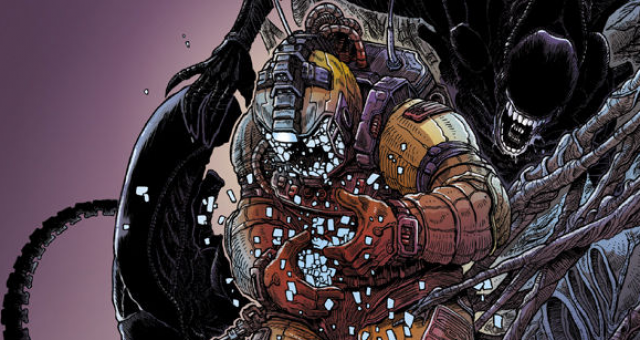 With Aliens: Defiance now officially in the rear view mirror, that leaves one high quality Aliens comic left crawling: Dead Orbit. Those looking for an Alien fix should be checking out this story. Many were disappointed by the lack of the core Alien mentality in Covenant but this comic grabs that sensation back. When we last left Wascylewski, he had survived the hull breach but finds himself in a worse situation: cocooned in the hive with twin Xenomorph babysitters. And two hours before detonation.

Right off the bat, the Captain gets snatched Superintendent Andrews style. This leads to a bit of a freak out from the rest of the crew. James Stokoe is channeling the spirit of the Nostromo here. After the xenomorph takes away their Captain, there is a realistic and intense “debate” about what to do next. Suffice to say, not everyone is in agreement about the right move. 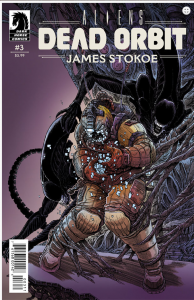 They finally decide that Harrow and the surviving salvager need to be checked on. Just when things couldn’t get any worse, the female Freddy Kreuger looking victim awakes from her sleep in quite the foul mood. From here on in the issue picks up it’s intensity and doesn’t let up. The pacing is really well done, and makes for an exciting conclusion.

While I have no shame in my love for Covenant, it feels nice to come back home. And that’s what Dead Orbit #3 feels like. Home for the Alien fans. Excellent effort through three issues. If you’re looking for cold terror in a warm summer, scoop up Dead Orbit. Stay frosty!