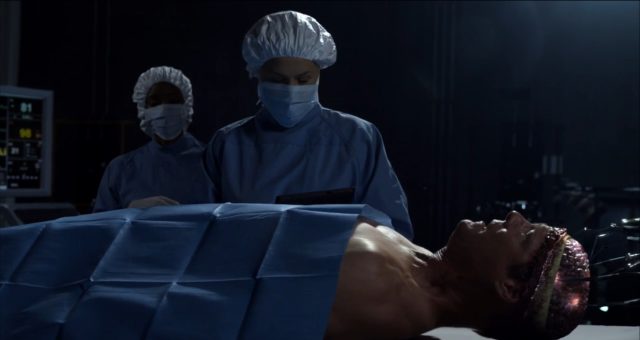 Agents of S.H.I.E.L.D.: The Writing is the 7th episode of the season and the truth of the alien markings plaguing Coulson is finally revealed. It opens up with a man and woman returning from a date with the woman stating she had such a great time. However she’s sure that she knows him from somewhere but just can’t quite place him yet. She tries to guess but to no avail so instead they decide to make a toast to remembering. She says that she’s an artist and tells a little bit about her work. This is when the man opens up and confesses that she indeed does know him, and he knows her. He says that he’s traveled a long way to be with her and that this is destiny. The woman becomes concerned with his sudden change in behavior and threatening actions. He takes off his shirt and shows her the alien markings carved in his skin. She’s shocked to see this but that’s because she asks how he knows about the markings. Instead of answering her he pulls out a knife and kills her. So Coulson isn’t the only one who is suffering from these markings, however his episodes are becoming more frequent yet he still can’t match them to anything. Nor can Skye, who asks what if they can’t figure out the meaning of these markings, and what will they do with Coulson if that’s the case. And considering May won’t be back until they’re able to track the recently escaped Ward, their options are very limited. Will time run out for Coulson and he ends up becoming a murder just like the others or will they finally get a breakthrough that can reverse the negative effects?

This show has been on such a roll to me lately that I look forward to each episode anxiously. And I’ve been thoroughly enjoying the alien markings story line so I was really excited about the revelation at the end of last episode. And the start of this episode wasted no time in ramping up the suspense and creepy factor of the alien markings by showing them carved into the man’s skin demonstrating how it’s been affecting people, and could soon affect Coulson. But it also became more intriguing when this woman with a relatively simplistic life would know of the alien markings as well, and somehow this man tracked her down. when news of this murder would reach the team, Skye would show Coulson a picture of her and he would immediately believe she used to be a S.H.I.E.L.D. agent, however wouldn’t be able to place her initially. And when they would visit the crime scene, which was her home, he would feel absolutely certain she used to be a former agent but would be perplexed as to why her artwork were all paintings of the alien markings with one of them having “magical place” scribbled on it.

Clark Gregg, as always, gives a very convincing performance and it truly felt like the clock was ticking for Coulson to solve the mystery of these markings or risk a complete mental breakdown and end up like the others. And I enjoy the way Skye has been involved in this and the change in her role from being just the computer hacker on the team and being directly connected to these markings. After it was revealed that the victim had GH-325 in her blood, the desperate decision was made to put Coulson in a machine similar to the one used by Raina to torture the memories out of him regarding the time he was brought back to life. This would show flashbacks similar to that profound scene from last season, however, the beauty in this episode wouldn’t be the suspense but the actual answers revealed as it would show more about the program that Coulson was head of, and the participants in the program. This would raise all sorts of interesting questions about who the alien really was and why was everyone having the same reactions during these trials. It also showed a darker side of S.H.I.E.L.D.’s secret programs, and was also reflective of the tone prevalent throughout this season. I was fully engrossed in all of this, and I probably would’ve been sweating more than Coulson in that scene but it’s winter time and it wasn’t that hot in my home. But this entire sequence was just incredible.

The focus wouldn’t solely be on the alien markings this episode as there was the matter of Ward’s escape to address. And I’ve been worried since the second half of last season that Ward would revert back to Agent Ward and all the exciting changes to the character would be undone. But I’m finally convinced that they’ve found a happy psychotic medium with the character and don’t intend on undoing all the changes. He would be tracked to one of his safe drops at the beginning of this episode but when Triplett would be given the order to apprehend him, Ward would show his hand by revealing C-4 strapped to his body. And this was an entertaining series of events as agents would try to track Ward in a game of cat and mouse, and it felt like a brief spy thriller. Like Raina, his true allegiance wouldn’t be to S.H.I.E.L.D. or Hydra but his own goals fitting well into the role of anti-hero. He would however reach out to Hydra for certain needs, and his story line adds another fresh take in the midst of these other entertaining story lines. There would also be some meaning character development for other characters, and Mac being involved in these activities and secrets completely new to him would add an interesting dynamic, and a form of subtle commentary on these events. And his friendship with Fitz would continue to grow but I’m still not clear on Fitz’s condition because some episodes he seems mostly fine.

And of course I don’t give away any spoilers but the last part of this episode and the truth of these alien markings would be mind-blowing, and the course of action going forward has me more excited than I’ve ever been for this series, which I’ve already been enjoying. It’s not just one mind-blowing revelation, which is very bold, but the feeling that this show has truly found its stride with its stories and characters, and there are so many good things ahead for it.

Agents of S.H.I.E.L.D.: The Writing is an amazing episode that potentially puts this show on a new level with the truth about the alien markings being revealed. It was an intense and highly entertaining episode throughout whether it was dealing with Coulson’s race against the clock, and a murderer, to discover the truth about the markings or Ward’s course of action. And the character development was strong, and I’ve been impressed with the way all the characters have been utilized this season. I can’t wait for the next episode to see how things unfold with the course of action laid out at the end of this one. If you haven’t been keeping up with Agents of S.H.I.E.L.D., it’s not too late to start.