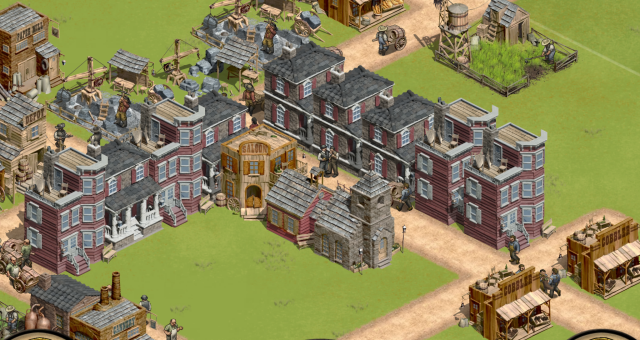 1849 is a city management game developed by SomaSim and set during the height of the gold rush in California. The discovery of gold has motivated many to move west in search of gold but fewer have thought of the reality of what it takes to maintain such an endeavor. In addition to natural disasters and fires there are the daily requirements of food and shelter, among other things, and that can’t be sacrificed. But those who do understand the reality have decided to join forces and build settlements that will allow them to mine all the necessary resources while providing for their families and also making space for entertainment. Even after joining forces things aren’t easy as there are finances that have to be managed, trades that have to be negotiated and unfortunately even crime that has to be stopped. But the opportunity is there for you to build up California and make the most out of the gold rush across 20 cities while building a name for yourself on your way to dominance. Do you have what it takes to make it or will you succumb to the rigors of the California gold rush?

Since I’m always looking for a new strategy, city-building game on the go I didn’t hesitate to jump on 1849 when I heard about it, and the fact that it wouldn’t have any microtransactions in it only made it that more appealing. But unlike Civilization or Sim City, 1849 only puts you in different scenarios in each of the 20 cities and you have a set of goals to complete before you can go on to the next one as opposed to having completely free rein on what you want to build. However the game does a really good job in easing you into its gameplay, which can be overwhelming initially with its fast pace if you don’t focus on the goals, and the tutorial spans a couple of cities.

The success of your city can be broken down into, yep you guessed it, income and expenses. You can generate income in only two ways, constructing houses, which cost no money, or manually trading resources but I’ll get into that later. Houses generate income based on collecting rent and they attract residents so it’s important to have the necessary resources in order for your houses to grow. Your expenses are generated based on places of employment you create, which is pretty much every other building available for construction. You cannot construct too many houses without places of employment or else your population will get restless and you can’t have too many places of employment without enough houses or tents will pop up around your city. So that’s a balance you have to strike that works well with the real-time setting of the game. The layout is pretty straightforward and there isn’t an excessive number of sub menus you have to navigate in order to find what you’re seeking, although the actual buildings available change based on the city you’re in and the goals you have to achieve. You keep track of your residents and finances through the middle menu, and when you click on it you can get detailed information from your financial advisor in one tab and your population advisor, detailing what your city needs to grow, in the other tab. It’s pretty convenient but one issue I have is the way income and expenses are generated from day-to-day. When you see residents traveling back and forth it makes sense that your cash goes up and down from one day to the next but in terms of game play when things are going fast and your cash goes from $500 to $300 and then $400 it’s difficult to get a sense of your cashflow and whether it’s positive or negative. Yes, in time you do become familiar with this but even when you’re experienced you’ll have to keep entering the financial advisor screen constantly to see if you’re in the red or black when either the cash changing just once a week or a sign next to your cash indicating a positive or negative cash flow would’ve been very helpful. 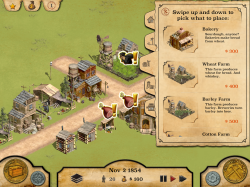 The store is another menu that you will spend a lot of time, and even though the 5 store tabs don’t change from one city to the next the available buildings on each tab does. Obviously you’re never put in a scenario where the buildings available prevent you from completing the goals but it can be challenging and fun to figure out how to go about achieving those goals. Each tab represents a different building type and some are necessary to help your houses grow, such as a salon, and others produce resources such as a wheat farm. Of course there are gold mines that can be placed only on deposits of gold but for a game about the gold rush there are surprisingly few cities where you’re mining for gold. That’s just an observation considering the process of mining gold would be just like any other resource, and as the cities get harder the path to achieving the goals won’t be as straightforward. This is where trade comes into play because either you’ll have to sell enough of a particular resource as one of the goals or import necessary resources you can’t produce yourself. Of course you can just sell your surpluses to make instant cash to buy whatever you need but just like the goals are chosen ahead of time so are the resources you’re able to buy and sell. You’ll have to pay a fee to have the route initially opened, and you have to monitor this constantly because if you run too low on certain resources your city will suffer and downgrade. So it feels like a race against time and it can be addictive when you become accustomed to the buildings and no longer have to figure them out. In addition to the stated goals there are telegrams that are sent that give you the opportunity to receive additional bonuses by fulfilling dynamic goals within a time frame, and sometimes the bonuses can be crucial but the timing could be very bad especially when it’s at the start of a new city.

I enjoyed 1849 a lot with its different scenarios for each city, and it’s easy to become engrossed in its game play so much that even the tune that constantly plays will get stuck in your head (at least I’m hoping it does now since it got stuck in mine). You can pause the game to plan out your next moves as if it’s turn-based, and in a couple of ways it’s similar to one of Zynga’s many Ville games but the continuous play along with a lack of any energy type slowdown makes this superior. And I found myself going through many cities at once and being unable to put it down. But 1849 can improve in some other ways. There are natural disasters such as fires and less frequently, earthquakes, and there’s no way to determine which buildings were burned down unless you recall exactly what you had there or figure it out when things start missing. The fires become so frequent it’s as if there’s a serial arsonist running around the city every night. This can be stopped by building a fire department, and it’s not expensive, but that means it’s absolutely necessary to build at the start of every city and until you learn that it can be painful. However you’ll be so caught up in its game play that all the minor hiccups will be easily overlooked.

1849 is an enjoyable, slightly addictive, city management game that has its flaws but its fast-paced play and different scenarios will keep you coming back for more until you finish all the cities. The scenarios at first might be short and feel limited but as the game progresses you’ll have longer scenarios to enjoy and be able to find creative ways to reach the goals. Considering the number of cities that actually have gold you might not feel like part of a gold rush but with the defined goals and telegrams you’ll definitely feel like you’re part of building a network in California and everything you produce or trade helps. I highly recommend 1849 if you enjoy city building games because it’s perfect on the go and is a refreshing take on the genre.