One of the features I’ve been interested in since it was announced is the Xbox One Game DVR. This is the built-in app that records all your game play so you can watch, edit, upload and share all your gaming moments. I used to have a separate game capture device for my Xbox 360 and even though it recorded in 1080p with ease, there was a slight delay that wasn’t noticeable in most games but in a FPS it could make a difference when I ran my Xbox 360 through the device. And even though it was easy to use the remote with it, there was the issue of trying to record a moment and suddenly not being able to succeed, or achieving something really great but not recording while it happened. I also used a specific flash drive that worked with it so it was easy to pop it in and out in order to transfer files to my PC, and of course I could choose the size of the flash drive and as a result the length of recording time. Now I didn’t record a ton of videos and I uploaded only a handful online but I did take a ton of screenshots with just a push of a button and all the reviews I’ve done for Xbox 360 games use those screenshots. And I do have plans to post more videos online for next-gen consoles and PC games next year so my use of the Xbox One Game DVR would be more than what I used my capture device for. So I sum up my needs as follows

The Xbox One Game DVR, which is a snappable app, fulfills those needs by exceeding them in most ways but does fall short in one specific way. It only records in 720p right now. So if you’re one who’s always posted videos in 1080p and absolutely require that then this would be a huge problem for you. It’ll work for my purposes for now since it’s not too noticeable in some Youtube videos but the difference can be seen on the TV when it goes from 1080p game play to a 720p playback video. It’s not even a file size problem as the file’s aren’t huge, and even still, it’s possible to upload videos and delete them to reclaim that space so I wonder what factored into the choice to not give the option. The Game DVR does solve the issues mentioned earlier regarding the ability to capture certain moments at the right time and it does this by automatically recording 5 minutes of game play while you’re playing. This can be utilized in 3 different ways: You can temporarily save up to the last 5 minutes of gameplay, save up to the next 5 minutes of gameplay, or save just the last 30 seconds of game play quickly.

So if you’re playing a game and you go through an amazing sequence, or a major comeback in a game that you wish you recorded you can launch the Game DVR app by saying “Xbox go to Game DVR” and it’ll load as a snapped app. You can always go to the home screen and then select the Game DVR app but obviously the voice command is faster. You then select “End Clip Now” and you’re given the option to keep the last 30 secs, 45 secs, 1 min, 3 mins or 5 mins. If you want to start recording your game play you can select “Start New Clip” and you have to manually stop it (but only up to 5 mins). If something happened really quickly and you don’t want to interrupt the game play in any way, you can just state “Xbox Record that” and the last 30 seconds are automatically saved as a recording. 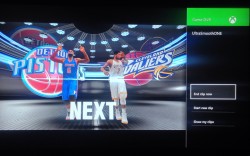 Now I didn’t have any issues at all with recording a video with the available ways to do so and it was so great to be able to record the last 30 seconds with just 3 words and not have to hesitate for even a second while playing. I did have an issue, which is still ongoing, with the game clips that were recorded not having sound but that’s only with one game (NBA 2K14) and Xbox Support has been working with me to get this resolved with 2K Sports. The Game DVR really shines when working with Upload Studio and you have to install Upload Studio from the app store (free). All the Game DVR clips you record are temporary and they have to be saved before they expire in weeks. You do this by pressing the menu button (start button) and saving the clip. You can edit the clip by selecting the edit option from the same list and this automatically starts Upload Studio. Upload Studio is divided into 3 sections, Record, Edit, and Share. Record is just the Game DVR clips, and recording yourself using the Kinect to personalize clips. Edit allows you to trim the clip, record an intro, add commentary, or use skins to add visuals to the game clips. Share allows you to upload to SkyDrive or Upload to Xbox Live so all Xbox Live members can view your clips, and there’s a separate section promoting shared clips from all members. When you select Start Editing you’re given 4 templates: 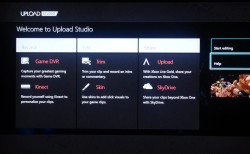 Upload Studio is very easy to use and the help section is just a button away in snap mode. I’m pleasantly surprised at how much can be done right from the console. Clearly my game capture device never did any of this and for my purposes it eliminates the need for any additional video editing software. And it’ll be even better once it’s possible to upload directly to Youtube. All 4 templates allow you to choose a skin for the video, which is a way for the video to be displayed as a prism or many other options. So if you’re using the Bookend template, for example, you can choose the Stripes skin and the first bookend clip will display the video as Stripes. It’s a pretty cool effect. You can also add a Night Vision skin to your Kinect video of yourself to add to a Call of Duty or Battlefield game play video. And you can add a voice-over throughout the entire video after the fact and if you’re satisfied with your voice-over you can just save and upload right there. Now you can’t add bubbles or text directly as an option, or a few other things that you would be able to do with some other video-editing software but it is possible to have a picture in picture in picture…and on and on if that’s what you want. And you can trim another clip added from any of the templates without having to leave that particular video. And when you’re done editing to your heart’s satisfaction you can upload the video to the Game DVR community or Skydrive and choose from one of the categories so others can view your clips too.

The Xbox One Game DVR working with Upload Studio is a solid game play recording and video editing combination. It allows you to record game play video on the fly in 3 different ways without affecting you while you’re playing. Upload Studio fulfills my needs in terms of editing game play videos and even though it doesn’t allow for custom graphic intros, such as a logo, it does offer numerous options to edit clips and add different effects. You can view clips uploaded by others by game or category, or upload to Skydrive and then add to Youtube. I’m satisfied with this combination although I would like to be able to record in 1080p and at least 10-15 mins of record time since even the edited videos can only be a total of 5 minutes long. And I can’t take screenshots directly but can take stills from the videos I record, although they would only be in 720p. Overall I’m definitely impressed.