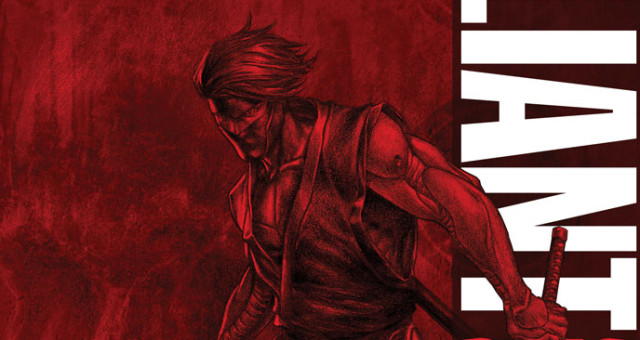 It’s more than fair to say that Valiant Comics had a very strong 2015 in terms of storylines and character development. There were many solid series to enjoy featuring their staple characters but the new characters introduced last year were just as enjoyable. Divinity was a series that I was completely engrossed in and I was glad he made appearances in Imperium even after his series ended. Rai has been excellent with its story, gorgeous artwork and intense action. Ninjak’s solo series was a pleasant surprise and Matt Kindt’s writing in it capitalized perfectly on what made Ninjak such a fascinating character. And Bloodshot Reborn shook up the status quo for one of my favorite Valiant characters. And based off what I’ve seen so far for 2016 I’ll say they’re not letting up for the new year, and that’s a good thing. 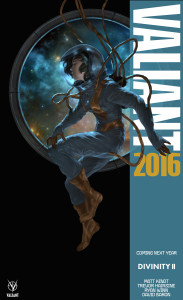 Divinity II continues with Abram, the entity known as Divinity, return to Earth and his interaction with the modern world. Since his release in the pages of Imperium he’ll be forced to determine his place in a world that didn’t even know he existed. If you haven’t read Divinity then you definitely should because it’s a great one. It’s about Abram, a soviet orphan raised by the state who was trained and sent to the far reaches of space as part of a secret mission only to return decades later with inexplicable powers. The teaser image above released by Valiant hints at another being with Divinity’s powers, perhaps one of his fellow astronauts or one sent on another secret mission. Will she be more benevolent than Abram or seek to use her abilities to shape the world in a way he chose not to do? Find out April 2016. 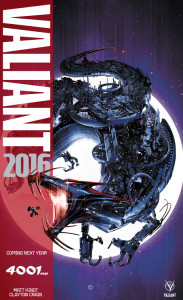 The last issue of Rai had a shocking ending, and it was clear that not only would everything change for New Japan but for Earth as well. After Rai’s fall from New Japan his allies on the continent sought to continue the rebellion against Father but they never expected the drastic action he would take as a result. This would force Rai, who was able to recruit the Eternal Warrior by revealing that Father has been keeping the Geomancer captive, to travel throughout Earth to build a force capable of defeating Father one final time. 4001 A.D. is Valiant’s huge 4-part crossover event featuring Rai, Gilad, a new X-O Manowar, Bloodshot, Armstrong and others in their fight to destroy Father. It’s set to be released in May 2016. 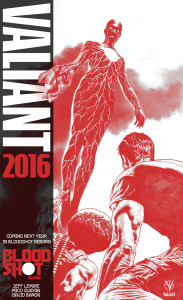 Bloodshot Reborn #9 dropped a bombshell with the mention of Bloodshot Island but like Ray my immediate reaction was “what is that?” The teaser image above doesn’t reveal much but it seems like a nanite-infused being plays a huge role in that. Not to give away any spoilers from the last issue but it seems clear that the nanites are sentient to some extent, and so I’m excited at the possibilities with Bloodshot Island. Bloodshot Reborn has been great at re-defining the character in terms of giving him a reason to be Bloodshot independent of Project Rising Spirit seemingly forcing it on him. The dynamic team of Jeff Lemire, Mico Suayan and David Baron will bring this story arc to life in the pages of Bloodshot Reborn in 2016. 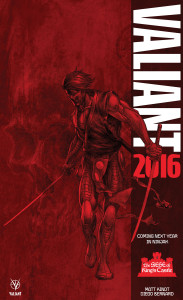 The beautiful image above by Mike Choi excites my imagination and the title of this story arc, Ninjak: The Siege of King’s Castle, makes it run wild with what it could mean. In the Shadow Wars story arc MI-6 at one point felt Colin King, i.e. Ninjak, was going rogue and wanted to reel in him. So maybe the siege of King’s castle is due to that or a form of Weaponeer seeking revenge. Or it could be a completely new enemy seeking to take down the world’s number one Ninja. All I know is I’m definitely looking forward to this story line. Matt Kindt and Diego Bernard will be on deck for this story arc.