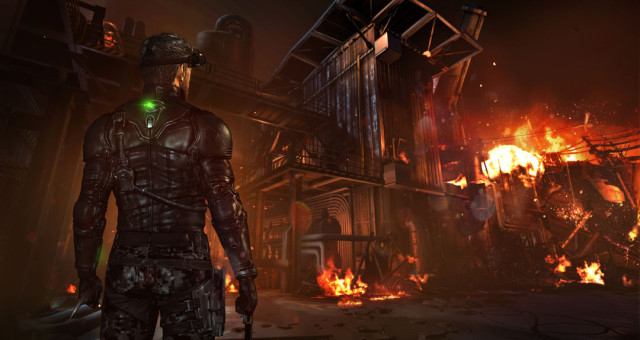 Tom Clancy’s Splinter Cell Blacklist is a third person action-stealth game developed by Ubisoft and continues the story of Sam Fisher following the events of Splinter Cell Conviction. Sam Fisher is head of the new counter-terrorism unit Fourth Echelon and was handpicked by the current President of the United States, Patricia Caldwell. Obviously it’s not an easy job as a group of terrorists known as the Engineers commence with a terrorist plot designed to hurt U.S. interests both home and abroad in order to make a statement about the U.S.’s military presence across the globe. The Engineers issue an ultimatum in the form of a countdown to keep escalating their attacks every week if their demands aren’t met. And they call this ultimatum the Blacklist. It’s up to you as Sam to lead the newly formed agency, which reports directly to the President, and stop the Engineers before they can succeed with their nefarious plot.

Unlike Splinter Cell Conviction, Sam will have his ops suit throughout as well as access to the gadgets and technology available for the Fourth Echelon. Being the head of a counter-terrorism unit has its perks. So it would make sense that the game play would reflect this and Splinter Cell Blacklist’s gameplay definitely does, as its game play options are referred to as Ghost, Panther and Assault.

Ghost mode is basically a stealth mode that is very familiar in many games with you having to use shadows, dimly lit areas or avoidance to navigate without being detected. Blacklist will give you gadgets to help you with this with a variation of distraction and EMP gadgets. You’ll also have a remote-controlled drone that you can use to not only scout areas to mark enemies but can also neutralize them as well. Panther mode is slightly different in the sense that instead of using stealth to avoid being detected, you use stealth to stalk and eliminate your targets. This can be done through a variety of moves, including marking, and weapons as demonstrated in the many game play videos Ubisoft has available now. And Assault mode is exactly as it sounds.

I’m very intrigued by these different modes, or at least the presentation of these different modes as being implemented in a groundbreaking way in the Splinter Cell series. I found the Last Known Position to be a very useful and the majority of the time, realistic game play mechanic so I’m glad it’s back in this one. And there will be co-op and multiplayer modes as well as an app, which is already available called the Spider bot. The app allows you to control a small, yep, spider bot, and collect intel that can be used for bonuses in the game. It’s very simple and to me was reminiscent of Pac-Man in some ways. As one who enjoys the Splinter Cell series I’m definitely looking forward to Blacklist’s release on August 20th.