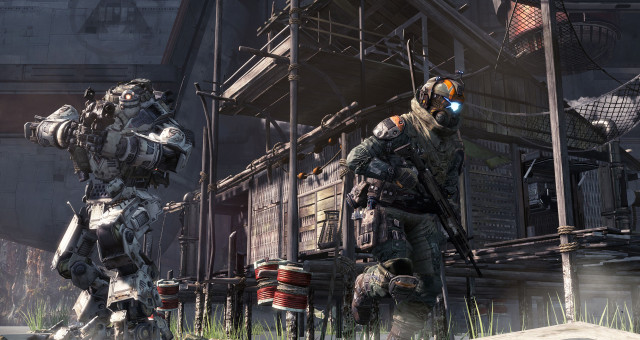 TitanFall is a mecha action game developed by Respawn Entertainment exclusively for the Xbox and PC. There is no single player mode in this game but it will have story elements that are consistent with single-player campaigns as well as NPCs. It’s set in a futuristic world where there’s a conflict, of course, between the Interstellar Manufacturing Corporation (IMC) and the opposing force referred to as the Militia. The cause of the conflict is the IMC wants to acquire valuable resources from regions in the galaxy that have been self-sustaining human settlements. And like any “heartless” corporation the IMC wants to acquire these resources for its own gain regardless of the destruction it would cause to these settlements. So you have to assume the role of a fighter to advance your call and you have at your disposal, if you survive long enough, a Titan you can call in and pilot to achieve your team’s objectives.

There are some games that I have where I only played the multiplayer because the campaign wasn’t compelling and that has applied to the last couple of Call of Duty games even though I will continue more of their campaigns. TitanFall cuts that out completely and created a multiplayer game with story elements and it’s not surprising that it looks like a combination of a Call of Duty game and MechWarrior seeing as how the founders of Respawn Entertainment were once president and co-founder at Infinity Ward. And I’m stating this in a good way because this is definitely one of the games I’m looking forward to in 2014 on the Xbox One. Watch this gameplay trailer and see for yourself how entertaining this looks. There’s a timeframe that has to be fulfilled as shown in the trailer before the Titan becomes available. Once it’s available you can switch in and out seamlessly and naturally combat changes when inside the Titan. There are melee attacks in addition to advanced weaponry and one ability in particular and shown in the trailer on more than one occasion is the Vortex Blocker. It’s a magnetic field that stops all the bullets and missiles directed at it and repel them back. It would seem as if the pilots of these titans are sorely under-powered when not in the mech and the best strategy would be to wait until you can activate a titan but pilots are very agile as demonstrated in the trailer. In addition to a jetpack that allows them to traverse rooftops and other short distances but they can free run (parkour) using objects and walls to avoid titans or flank them and they do pack a punch with the firepower they carry. So titans aren’t unbeatable and instead strategy and team work is necessary for either side to win.

The action does look great and this is one of my most anticipated games for 2014 but I do hope that the cutscenes showing story elements do give some depth and the team based objectives are more than just securing locations. If TitanFall lives up to its potential it can definitely be a game changer in multiplayer FPS in the vein of COD games. And with dedicated servers through Microsoft’s Azure cloud the gameplay should be as smooth as it is in the video with no interruptions due to lagging or host migration. This is one game I know I will be making time for in 2014.