As a result of the success of Fox’s Sleepy Hollow, supernatural and horror fans have a show they can enjoy as there were enough frightful moments filled with elements of the occult in its first season that could satisfy…well maybe even Washington Irving, who wrote The Legend of Sleepy Hollow. Even though it wasn’t one of the shows I reviewed last season it was definitely one I thoroughly enjoyed, and it’s on my list of potential shows to review this upcoming Fall season. If you’re unfamiliar with the TV series it’s set in Sleepy Hollow and follows the story of Lieutanant Abbie Mills, played wonderfully by Nikki Beharie, as she works with Ichabod Crane, who was brought back to life in the present-day due to a connection to the Horseman he beheaded in 1781 and has now returned. The chemistry between Nikki Beharie and Tom Mison, who plays Ichabod, is definitely one of the strong points of the show, and Abbie’s search for answers from her past along with Ichabod’s search for answers in his makes for very interesting scenarios that range from touching to humorous since Ichabod has a hard time adapting to the current world. And there’s plenty of character development that’s made all the better with the strong supporting cast and terrific writing. However the more electrifying moments deal with the occult and the mystery behind the reason(s) for the Headless Horseman’s return as it was revealed that he was actually Death, one of the Four Horsemen of the Apocalypse. And there were plenty of twists in the first season as competing sides emerged in the long struggle of good versus evil with Abbie and Ichabod revealed as the two witnesses who are capable of stopping the Horsemen and the impending apocalypse. 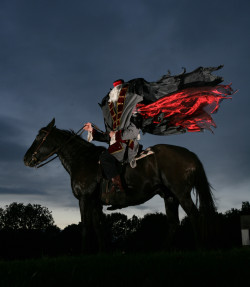 When I reflect on this show I’m amazed at the Sleepy Hollow Phenomenon, the actual town that spawned a legend that has endured for almost 200 years with various adaptations. Even though the current TV show veered more towards the supernatural than horror, the folklore is still very strong. And one of the things that make an excellent horror story is its ability to connect something real with fear so it becomes an engrossing experience. Even horror films of the found footage variety have worked occasionally because of their promotion as actual events recorded by those who were present and providing the viewer with a “first-hand” account. Others such as the Amityville Horror work because of it being based, albeit loosely, on real-life events and the fear of a haunted house. Sleepy Hollow is unique in ways because it’s about an entire village, which actually exists in New York, and the headless horseman riding through the village terrorizing residents is just one aspect of the belief of this town being haunted. And the town actually embraces this legend and provides an engrossing experience for visitors who love it. I have visited Sleepy Hollow and enjoyed it but that was prior to the TV show. One who is an expert on traveling to iconic locations and experiencing everything it has to offer is Christa Thompson, the Fairytale Traveler, who describes it perfectly:

“Everywhere you turn in Sleepy Hollow you are reminded of the legend that lives there. From street signs decorated with the Headless Horseman, to tour guides dressed in period clothing and even a sculpture in the city’s center. The Headless Horseman lives everywhere, hiding, creeping, much like he did in the Legend of Sleepy Hollow”

I love her site due to her ability to bring these travel locations to life  in a very informative, yet exciting way, where you can feel as if you’re there, and if you desire to actual travel to these locations she offers essential tips and resources to make it easy. And in the case of Sleepy Hollow, even if you’re looking for a more intense experience instead of just visiting locations, they have an annual event described as the “freakiest, goriest, and most haunted attraction in all of the Northeastern United States” called the Horseman’s Hollow. So if you’re a huge fan of the show you can see all the locations portrayed in it, and if you’re a horror fan you’ll also have a memorable experience you won’t regret. 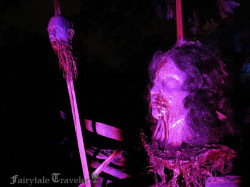 I’m really looking forward to season 2 and seeing the direction the show takes but if season 1 is any indication then I’m sure it’ll be another enjoyable ride. Until then, I’ll continue to reflect on the Sleepy Hollow Phenomenon.