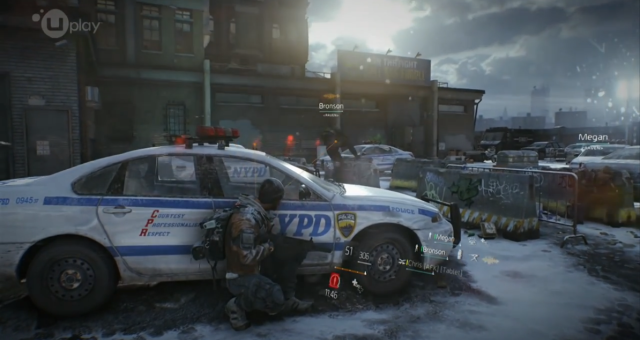 Tom Clancy’s The Division is an MMO shooter developed by Ubisoft and was showcased at E3 2013. It was definitely a surprise to me but is now one of my most anticipated games for 2014. Even though it’s an MMO shooter it has strong RPG elements and it’s set in an open world environment. The story takes place in NYC after a deadly pandemic leaves it decimated and in chaos with matters only getting worse. In an attempt to stem the tide a special unit called the Division is activated and it consists of “self-supported tactical agents.” This of course sets the premise for each MMO player to have everything at their own disposal while also being able to work as a group to be successful. And it’s even more complicated because as Ubisoft describes it, there’s an “epic conspiracy” that encompasses the pandemic and those who seek to use the current state of affairs for their own gain. But failure is not an option as you and other agents have to team up to regain control over NYC and put an end to the conspiracy trying to destroy it completely.

This is an MMO so obviously it’s an always-online game. But that also means you’ll be able to jump in and out of the game at any time and team up with friends to complete different missions. It is being promoted as having a strong single player experience so there will be parts of the city that highlight that aspect more than others. Ubisoft also promises a ton of customization and not just in the form of cosmetic items but through the RPG elements of this game. You’ll be able to customize skills, weapons, gear and even craft new gear. You’ll be able to loot enemies and locations. This is a next-gen game and the graphics are incredible so it definitely doesn’t look like a typical MMO.  It looks more like really good multiplayer for a 3rd person shooter. In the game play footage shown by Ubisoft there’s an agent walking through a beautifully detailed NYC and teaming up with a couple of other agents before engaging in hostile fire with a group that was definitely up to no good. The map interface shown was a 3D map that updates in real-time and each agent has a device on their wrist that is basically the menu interface as well as the way to access the inventory. It’s a very slick design and eliminates extra HUD items on the screen while playing. The menu appears to be pretty deep too and confirms the customization of skills and gear. (As well as a player leaving with no hiccup in play).

The gameplay video really blew me away and in addition to solid game play mechanics the story has me extremely intrigued. The potential for this game to me is extremely high and I will be keeping my eyes on as much information for this game as possible. Please don’t just take my word for it and instead take the time to watch this amazing video. There will even be an app to allow you to continue to play on a tablet for a slightly different experience. It’s currently just for next-gen consoles but there’s a petition for this game to be released on the PC and it already reached its goal. Regardless of which platform this game is released on it’s one that I will definitely have to own.