There are many turn based strategy games that put you in the shoes of a great leader but That Which Sleeps, King Dinosaur Games’ entry in the genre, puts you in the role of an ancient evil attempting to conquer the world and defeat its heroes. Even though that’s a relatively unique premise in turn-based strategy games, this premise is reflected in the actual gameplay and this is what has caught my attention. The key to being successful in That Which Sleeps is to achieve your goals without being discovered or the world will fight back and destroy your plans to be fully awakened. There are various ways you can accomplish this using your agents in the  fully realized world of That Which Sleeps. So you can manipulate the AIs based on their interests and either corrupt, conquer or charm them. If that’s not enough then you can create famines in different areas to change and weaken the power structures or if that’s not your style then you can influence the dreams of kings to drive them mad. However, every time you perform an action you leave behind clues that Champions or Heroes can discover and if they piece together all the clues to realize the truth they present a huge problem you have to handle. And if the notoriety of your agents become too great resulting in them being hunted you can let them become scapegoats to keep your plans hidden or give them some of your dark power so they can fight back. 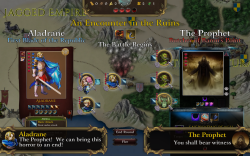 I already thoroughly enjoy turn based strategy games with all the Civilization games being my drug of choice. That Which Sleeps has so many unique features that can really put a stamp on the genre, and I’m excited about all the possibilities. Of course you’ll be able to customize the world at the beginning of scenarios from the origins of the ancient evil to the actions that made that ancient evil notorious. There’s also an in-game editor that allows you to create heroes in the in-game editor.  This game isn’t set to release until 2015 but after seeing what it’s all about I can’t wait to get my hands on it. Check out the official trailer below and visit the official kickstarter page for more information.