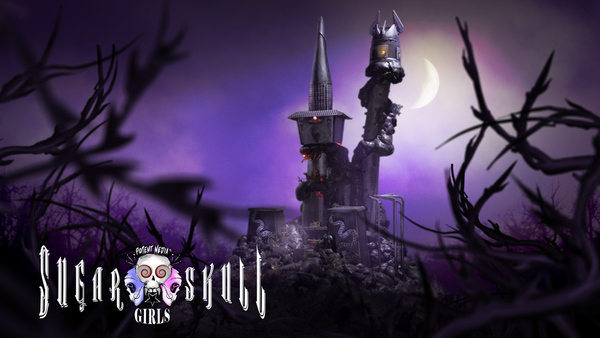 We are Potent Media, a Bucks County, PA based film company specializing in creating entertainment from films to music videos to post-production services. We are now in our 8th year as a business having produced three feature films that have been seen on Redbox, Netflix, Verizon Fios, and Vudu. We have also produced a variety of short films and web series. Our newest film, “Potent Media’s The Sugar Skull Girls” is our venture into creating our first family film.

What’s the movie about?

The Sugar Skull Girls are a result of a resurrection gone wrong. When Demetrius (John Amplas,Martin, Day of the Dead) hires a witch (Leslie Easterbrook, The Devil’s Rejects, Police Academy) to resurrect his dead grand-daughter the spell accidentally conjures three neo-gothic sisters from a supernatural world called “The Shadow”. When the Queen of the Shadow, The Pale Witch (Carmela Hayslett) realizes the girls have vanished from her tyranny she sends her pumpkin soldiers and other creatures out to collect them. The film also stars Michael Berryman (Hills Have Eyes) and Addy Miller (The Walking Dead) as the Alpha sister, forever 14-year-old vampire– Luna.

This film is reminiscent of family films from our childhoods like The Muppets, Teenage Mutant Ninja Turtles, Dark Crystal, combining puppetry with production models and visual effects.

The movie has been cast. Sets are starting to be built. All we need is your help to bring this wonderful film to life. http://www.indiegogo.com/projects/the-sugar-skull-girls