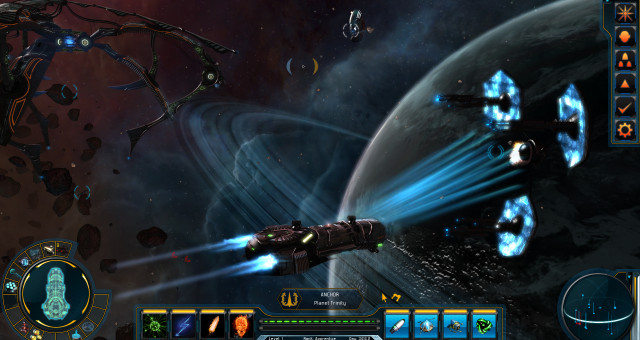 A beautiful space sim came across my desk this past week, Starpoint Gemini 2, and it appears to be love at first sight for me. I thoroughly enjoy space sims and as I read more information about it I just knew I had to play it (and I’ll of course review it when I’m done). After space sim, it had me at two words: RPG depth (I’m making it two words). Take a moment to read the official description and then enjoy a few gratuitous screenshots from the game to see how gorgeous it is:

Captain your own space ship and roam the galaxy in 3D in this tactical space simulator with tons of RPG depth ! Space has never looked so inviting – but images can betray…

It has been two years since the end of the second Gemini war, and the situation in the war-torn system is further from resolution than ever before. The collection of freedom fighters named Gemini League is now reduced to a small group, with no power or influence, after losing their leaders. The Empire meanwhile, has used the re-opened Starpoint to occupy the once renegade Gemini sector – and beyond.

A multitude of Imperial warship fleets and mammoth motherships have crushed every trace of opposition. The situation was looking bleak, when they suddenly halted their armada and re-shifted their focus on fortifying Starpoint with staggering numbers. Rumors soon spread that they were afraid of something coming after them through the T-gate, from what was supposed to be the core of the Empire. What are they running from that makes even the mighty Empire tremble?

Starpoint Gemini 2 will take players on a breath-taking journey, with dark secrets and unimaginable twists that will finally unveil the incredible truth…