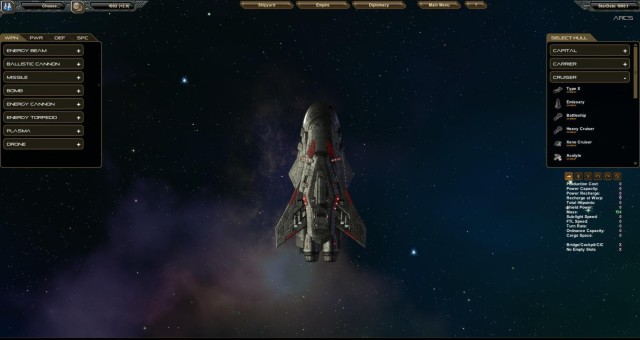 Star Drive is a 4X Space Strategy game developed by Zero Sum Games where you build and manage a galactic empire and fleet. It’s a single player game and you play as 1 of 8 alien races and you compete against the others to inhabit planets, research technologies and build the best ships. It’s real-time so you’ll have to be active when diplomacy fails and you find yourself putting your ships up against an opponent’s ship. And although there are many quality strategy games out currently, Star Drive seeks to stand out from them in more ways than just being one of the only and biggest galactic strategy games. The customization of units as well as being able to control them in combat are just two of the many ways it seeks to stand out. Don’t believe me? Check out this official trailer.

As is the case in most strategy games you’ll be able to construct new units, research technologies, manage an economy to keep your empire robust and of course diplomacy and combat to interact with the other races in the game. You can customize your race as far as traits and history go and that will impact the game play. You can customize the ships you build as well if the default ships aren’t up to your standards such as weapons, fuel capacity, etc. And you don’t just have to watch them go to battle because you can directly control them in a manner similar to space shooters. This should increase the replayability value tremendously because you can design completely different ships each time you play. And the developers will not only support but encourage modding as well so that will only lead to even more possibilities.

I’ve been looking for a great space strategy game for some time now and so I’m definitely giving Star Drive a try. It’s a 4X strategy game in every way and the combat looks like it’ll be a lot of fun. It was released earlier today so it’s available for PC on Steam now.