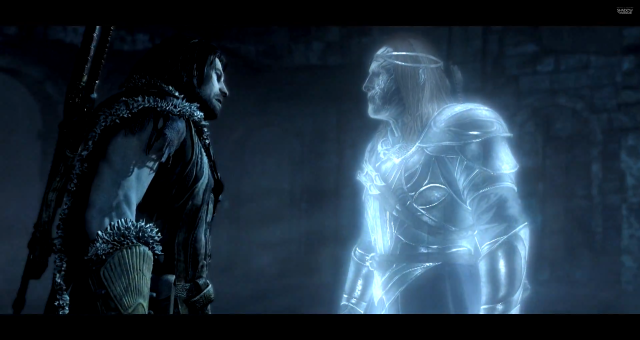 Ever since it was announced that Talion would be part wraith questions swirled around who or what the wraith actually was. And with the latest Shadow of Mordor reveal, the identity of the wraith has been shown and it’s Celebrimbor, an elvish prince who played an important role in Sauron’s original scheme to create the One Ring. It’s been clear from the beginning that Talion’s quest for revenge was fueled by the murder of his wife and son, and the bonding with the wraith was in part due to its own desire to seek revenge. So the revelation that the wraith is Celebrimbor has me very excited because the story will not only explore one of the most important events in the history of Middle-Earth but in doing so opens the door to even more Tolkien lore in future games that haven’t been touched on in games or movies such as other beings or Sauron’s origins. As the trailer shows, Celebrimbor was responsible for the creation of the rings of power however he and others were deceived by Sauron, who went by the name Annatar and claimed to be a delegate of the Valar, in creating them. This led to one of the great wars and Celebrimbor would be captured and tortured before meeting his end. It was stated last year that Tolkien scholars were heavily involved in constructing the story for the game, and now knowing this I’m very interested in how things will play out. The good news is the game has been moved up so it’ll now be released on September 30th. Only 2 months to go so for now check out the trailer.