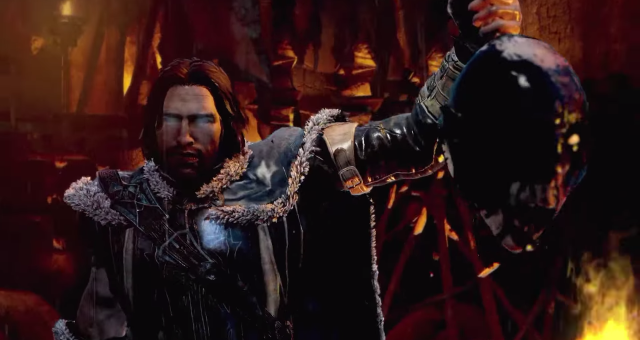 It took me a while to recover after watching it because I was so excited, but a Shadow of Mordor gameplay video has been released showing some of the gameplay mechanics. In an 8 minute long video we’re given a taste of the combat, stealth, wraith abilities, and the nemesis system. This is all pre-alpha gameplay but it looks sick so far and I’m very encouraged by it. The combat and stealth look very similar to an Assassin’s Creed or Batman Arkham game, and that’s not necessarily a bad thing. You can use the environment to your advantage as the video shows the capability of throwing enemies into the fire causing damage to them. However the wraith abilities add an entirely new element to not only combat and stealth, but to how you can approach situations. Of course there’s the ability to identify enemies but the wraith dash attack looks awesome as Talion vanishes and instantly appears next to enemy finishing him off quickly. He also has pinpoint accuracy as he shoots an arrow as a wraith into the leg of a fleeing enemy instead of killing him. This highlights the nemesis system, which has the potential to make Shadow of Mordor an extremely engrossing game unlike any other because your enemies remember what you personally do to them and future encounters reflect that.

At 3:18 we’re shown how incredibly powerful Talion is as a wraith and the options on what he can do to an enemy, whether that enemy is used to assassinate, used to spy, terrorized in order to spread fear, or sacrificed. But that’s not the only thing as you’re able to see that enemy’s connection to others as well as a success rating on the task you want to send that enemy to perform. I’ll let the video speak for itself but the Nemesis system is very impressive to me and the ability to control multiple enemies with your wraith abilities as an option to approach a situation is a beautiful thing to watch. The way to approach a situation is entirely up to you and this is way more than just a simple hack and slash with a LOTR-themed story. You’ll truly have to become engrossed in this original story in order to make the best decision while keeping in mind that the game, or rather individual enemies remember your actions. As a LOTR fan I love this concept because I want to be engrossed in the game and feel like my actions are actually affecting this world, and even just as a gamer the Nemesis system has the potential to be revolutionary. And if you’re concerned about the story then you might be reassured to learn that Peter Jackson advised Monolith regarding the story, which won’t be based on his movies, and also that Middle-Earth Enterprises has some involvement too. Warner Bros doesn’t seem to be holding back in terms of including those who are extremely knowledgeable about Tolkien lore and this should satisfy even the biggest fans. I know I’m definitely looking forward to this game even more. Check out the video and let me know what you think