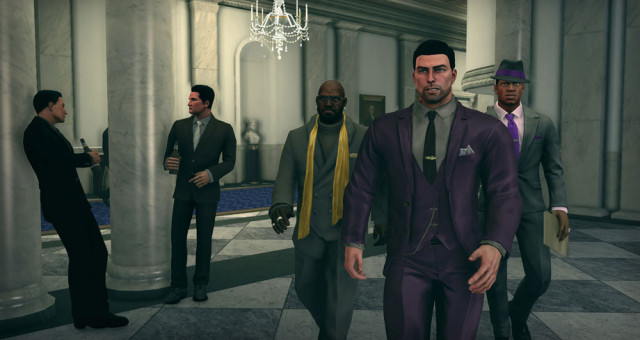 The Third Street Saints are back in Saints Row IV and as always ready to tear shit up. Once again it’s developed by Volition, Inc and will be the most ambitious installment in the series to date, and that’s saying alot considering how over the top previous installments could be at times. It picks up 5 years after Saints Row 3 with the Saints being hailed as heroes after defeating Killbane and the Special Tactical Anti-Gang forces in Steelport. And the Boss has big plans. And what could be bigger than stealing an election and becoming the president of the United States? Apparently nothing because that’s exactly what the Saints do. But before the Saints could finish rolling out their plan for America there’s an alien invasion by the Zin Empire, led by their Emperor Zinyak, and they mean business as the White House is destroyed and thousands across the country are killed.  It’s up to the Saints to stop the aliens’ global invasion and subjugation of the human race in what is easily their biggest challenge to date. However owning the White House has its perks and it wouldn’t be a Saints Row game if the Saints didn’t have bigger and better weapons than ever.

If you played any of the previous Saints Row games then you know it’s an open-world game set in the fictional city of Steelport. And even though the city layout is very realistic (and presumably in the case of this entry, a little more futuristic) Saints Row games never take themselves very seriously…if at all. The story line tends to be a parody of itself at times, blending eccentric characters with over the top situations to create entertaining and comedic scenarios. The Saints stealing an election and appointing all Saints members or former adversaries as cabinet members follows that tradition. And then add to that an alien invasion where the Emperor is described as “a connoisseur of the finest things in the universe” and it’s easy to see how this is more ambitious than any of the other titles. But where Saints Row really shined for me was the thrilling action sequences and just being plain fun at times. So of course, in order to fight aliens there’s the potential for even greater action sequences. And as the official trailer shows there will be even more crazy action. There will be new abilities, weapons, cars, spaceships and I expect a ton of customization.

There’s also a matrix-like simulation, courtesy of the aliens, where you have a variety of superpowers at your disposal including telekinesis, super speed, super jump, a force field, a power blast and other buffs. I’m pretty excited about trying this part of the game as I’ve always been more of a fan of the action, even the comedic action, more than extremely crude humor, such as the dildo-bat. It’s been the creativity attached to the humor and the tongue-in-check atmosphere that kept the series enjoyable for me. Case in point, the Dubstep gun looks like something that will be funny or the Inflat-O-Ray. And the Black hole gun looks like one badass piece of weaponry.

As someone who has played all the Saints Row games I’m looking forward to this and can’t wait for August 20th to get here.