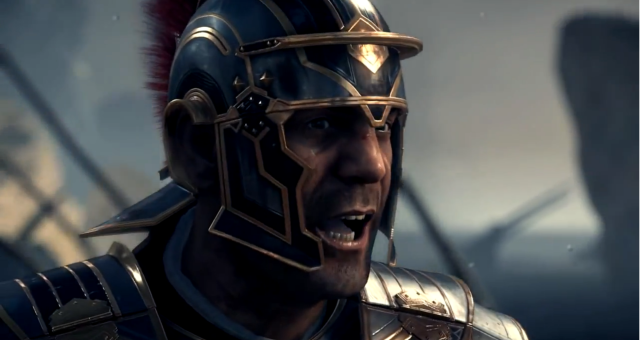 Ryse: Son of Rome is one of Xbox One’s exclusive launch titles and is an action-adventure game developed by Crytek. It’s the story of one General Marius Titus and chronicles his rise from a soldier who joined the Roman army after witnessing his family being brutally murdered by barbarians to a heroic general. It’s set in a very loosely based historical Rome and since it’s a cinematic recreation of it I wouldn’t expect much, if anything at all, in the way of open-world exploration. That assumption is based on what was shown when the game was revealed and its strengths appear to be its action and the telling of the story through action sequences. What was revealed was an already General Marius Titus leading an attack on a barbarian stronghold. The graphics look stunning with the CryENGINE 3 with debris flying around the battlefield.

The gameplay mechanics are very straightforward in that there’s a sword attack, a shield attack, combos and finishing moves. Whether these finishing moves will be available throughout the game to some extent or unlocked as the game goes on and you rise in the ranks remains to be seen. One of the features shown is the ability to command troops and attack in formations. I’m hoping it’s more than just contextual and is a regular part of gameplay once reaching a certain rank.

The action looks really good and a very well done hack and slash can be a guilty pleasure although in the game play footage shown there are plenty of finishing moves. Usually that can be a good thing whether it increases the dramatic effect of certain attacks or helpful when dealing with alot of enemies at once but I am interested in seeing what triggers a finishing move in this game because every kill shown in the first video was preceded by a prompt for a finishing move. Crytek states that there are “over a hundred brutal final executions” and the ones shown do make for entertaining game play. I do hope it’s not overdone and every single kill throughout the game has to be accomplished with a finishing move in slow motion. It still looks very action packed.

This game was originally announced a couple of years ago for the Xbox 360 and designed to work with the kinect but has since been changed to be an exclusive for the Xbox One and kinect functionality has been reduced to voice commands. Physical gestures can still be utilized but from my experience with the original kinect I’m very hopeful since the game won’t be limited by the original kinect *cough* Star Wars *cough*.

Overall this is one of the Xbox One launch titles I’m looking forward to getting my hands on. The intense action sequences, the formations to invade a barbarian stronghold and yes even some of the finishing moves makes me hope this game lives up to its potential to be an enjoyable action adventure game. Watch the footage.