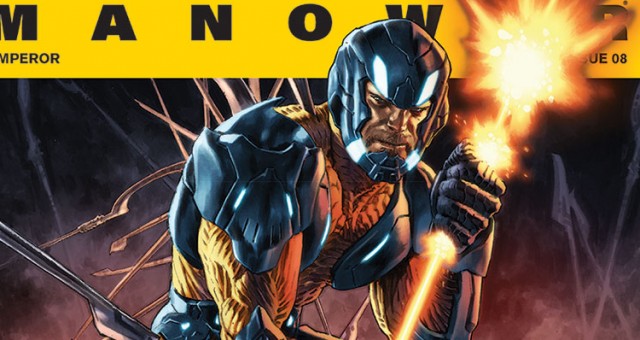 X-O Manowar #8 is the conclusion to the war against the forces of the Cadmium Emperor in order to unite the planet. It opens up with Aric rallying his forces the night before the final battle. He tells them that they’re only one night away from uniting all the tribes that have been fighting each other for ages. They believe him since they’ve witnessed him accomplish more than they could’ve dreamed. And they’re ready to take on the emperor.

After rallying the troops, Aric visits soldiers he fought with from the beginning. During this time they have become friends and he knows this could be the last time seeing them. One soldier, Catt, tells Aric that she knows he plans on killing the Emperor. However, she fears what might be next for him. Will he become a just ruler or will he lose his way like so many other rulers before him? 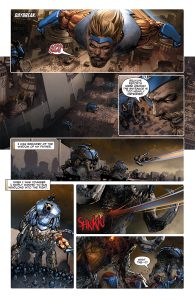 This has been a highly entertaining series for a number of reasons. Aric’s portrayal has been the most intriguing aspect so far. Shanhara’s statement last issue, “you are incomplete without me, Aric…I am so much more,” perfectly captured my sentiment towards this series. These past issues showed Aric with and without his armor to clarify his current mentality. And I’ve actually cared about the various sides and characters. This issue was successful in showing the unique benefits of their union. And it also showed Aric’s continuing growth on this planet.

After the stage was set with Aric’s conversations with his comrades, I was looking forward to how the last battle would unfold. Thankfully it was more than just beautiful eye candy from the great Clayton Crain because of a slight twist. Up to this point, Aric has been able to physically overwhelm opposing forces in different ways due to his armor. This time he would have to use his armor in a new way and that added some suspense to the success of the mission. It wasn’t just about Aric’s survival but the survival of characters introduced this series. 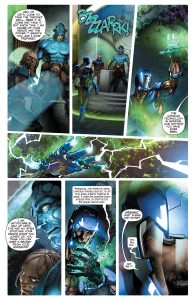 I was seriously engrossed in the battle and the overall outcome. It was even interesting to see Aric’s solution to the new weapon the Cadmium Emperor had to use against Shanhara. But the aftermath of an entertaining climax resulted in an uneven conclusion to the issue. Aric’s conversations earlier in the issue, and throughout this series, made it clear that the real challenge would be what to do with the power he would attain. I would have preferred to see the focus more on who lived and died. Or the final conversation without the last 3 panels. In my opinion it cast a character in a bad light unnecessarily.

X-O Manowar #8 is a solid conclusion to the first chapter of Aric’s time on the planet. The stage is wonderfully set by Aric’s somber interactions with his comrades. And the battle itself is intriguing and varies from earlier battles with an enjoyable climax. However, the ending reiterated the challenge facing Aric after the final battle but that message is conveyed better at the start of the issue. But I’m looking forward to the next story arc and seeing how Aric handles his new responsibilities.