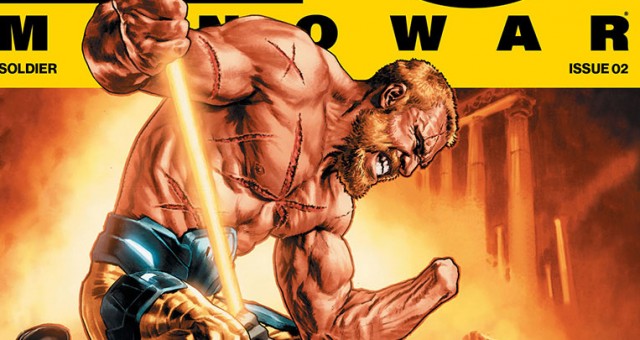 X-O Manowar #2 continues with Aric leading an assault into the heart of the Cadmiums’ empire. Aric was reluctant to fight in the first battle but now he calls on Shanhara once again before this big assault. Aric blames Shanhara for them ending up on a world where they are drawn into conflict once again.  But she states that he achieved greatness because of her. And that he has never had a stronger bond than the one with her.

This exchange is interrupted when Aric is called to the mission briefing. Aric and his team would be launched into the Cadmium base. It’s risky because they could be disintegrated on impact but if they survive their mission is vital. They’re to eliminate the targeting towers so the Cadmium’s spaceships can’t wipe out their forces. However, Aric is warned before they leave that the Captain has it in for him due to Aric’s growing popularity. Can Aric contend with the Cadmium’s forces while making sure he’s not carelessly sent to his death? 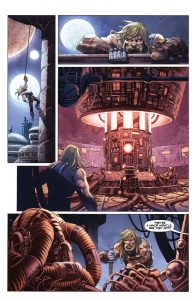 I thoroughly enjoyed the first issue due to Aric’s intriguing new situation and mentality. The action sequences were exciting because of the gorgeous artwork but I felt Aric’s mentality was neglected at this point. This issue starts off with Aric conversing with Shanhara directly but doesn’t stay with that for long. Thankfully this issue puts Aric’s team in some interesting situations and the characters are entertaining. However, this issue still falls slightly of making me feel completely engrossed in this conflict on planet Gorin.

I liked the way the plan was laid out for Aric’s team including Aric checking with Ironside. His experience with all aspects of conflict was on full display. It added another wrinkle to the dynamics on the planet. So when Aric’s team trusted him more as a result of him changing the plan it made sense. These characters could have easily been throw away characters but they were actually given enough depth to care about who lived or died. And Aric’s use of Shanhara was pretty intense. Even though he didn’t have the full use of his armor, its power was still evident. 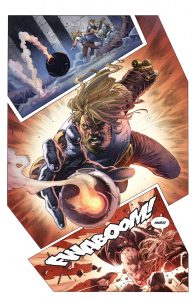 One of the things this series has done well is give Aric a reason to continue to fight. The reluctant soldier turned into the competent leader vibe was working this issue. Again, the conflict with the Cadmiums as a whole felt generic, as evident in Aric’s interaction with one. But with the focus on Aric’s team and his personal actions, the story was still intriguing. And the conclusion of this issue made me believe that next issue will get even deeper in terms of Aric’s situation or the conflict as a whole.

X-O Manowar #2 is a solid follow-up with more engaging action sequences than the first. Aric as leader of characters with even a little bit of depth made the conflict more interesting. The artwork is still incredible. I just hope next issue there’s more Aric and Shanhara.