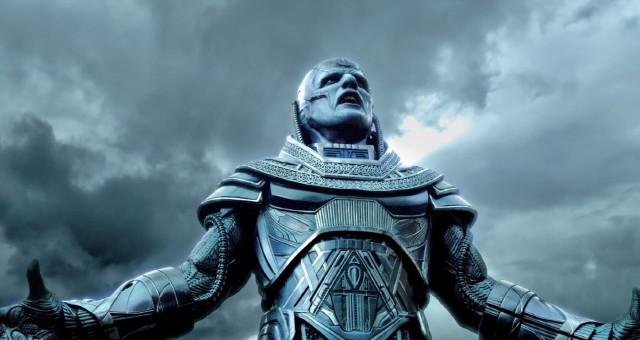 X-Men: Apocalypse is a superhero movie that pits the team against Apocalypse, the first mutant ever in existence and the most powerful they’ve ever faced. It opens up in ancient Egypt with En Sabah Nur, i.e. Apocalypse, as part of a procession ritual to a great pyramid. With his current body old and frail the time has come for his consciousness to be transferred into another body, one that has healing abilities. He’s being guarded by his Four Horsemen since he’ll be vulnerable during this process. However, not all worship him as a god, and as soon as the ritual starts so does the rebellion. There’s a direct attack on Apocalypse but the Horsemen make easy work of the attackers but the overall plan is to bury Apocalypse under the weight of his own pyramid, and that plan succeeds. With his horseman gone and him buried beneath his pyramid, Apocalypse is no longer a threat to the world. Over 5,000 years later a cult is able to free Apocalypse in modern day Egypt, and his first recruit is Ororo aka Storm, who he is able to help by unlocking her true power. Meanwhile, Magneto has been living a simple life with a wife and daughter despite the entire world still looking for him. And halfway across the globe Xavier is leading his school of gifted youngsters teaching them how to utilize their powers effectively. But will all of this be enough to stop the upcoming Apocalypse?

Considering I enjoyed the last two X-Men movies it might seem a little late to now start talking about the source material. And I don’t want to sound like a “get off my comic book lawn” curmudgeon but I couldn’t stop thinking about how there were literally decades of material to work with yet something this generically awful was created. It seemed like the first 2 movies were interested in world building to an extent and this one completely flushed that down the toilet. There was the generic bad guy who wanted to take over the world (since he felt nothing like Apocalypse) and a character wanting to avenge his wife and daughter’s death by taking it out on the world. And that was it because the execution of it all prevented anything of substance from taking place. Honestly if it weren’t for the acting this film would have been void of any entertainment.

I overlooked Apocalypse’s origin here because I figured it was important to give them an opportunity to flesh out the character for themselves. I even overlooked how Magneto was working in a steel mill in Poland for years despite having his face all over the news as the world’s most wanted man. This scene with Erik (Magneto) and his family was the most touching scene in the movie, and it was well-orchestrated in terms of what triggered it. Yet I wasn’t convinced that this would make Magneto want to join forces with Apocalypse not because of this but because how ridiculously thin Apocalypse’s plan or ideology was. This showed to some extent when he recruited his first mutant, and yeah it was silly that he used an old ass TV to download all the information from the world. Yet that wasn’t an isolated display of his power because it was never truly defined during this movie (Was he sand bender?).

When I thought about Apocalypse being in this movie I thought that at least his mantra of Survival of the Fittest would somehow be treated in a mature way in terms of philosophical differences between him, Professor X and Magneto. Storm, Psylocke and Angel’s recruitment lacked any substance and I wondered why any of them went with him aside from just increasing their power somehow. Storm was an intriguing character when she first met Apocalypse but after joining him she had maybe one line. Same for Psylocke and Angel, so I was completely disappointed with how Storm and Psylocke were wasted. All they did was walk around with Apocalypse from one place to another or just stand around him. They didn’t fly, they didn’t run, they didn’t have any reason to use their abilities. They didn’t even have a cool sequence where they at least had to contend with Earth’s militaries. They. Did. Nothing. Time wasn’t even spent delving into the characters to explain why they would join Apocalypse.

It wasn’t much better on the X-Men’s side. Following the events in Days of Future Past, Mystique is viewed as a hero among mutants worldwide and not showing any growth she’s reluctant to accept this role. I admit this felt weird but it was even weirder her ineffective Professor X was in preparing any of his students on the mansion for a serious situation. Scott Summers and Jean Gray would have slightly interesting chemistry but aside from Scott opening his eyes a couple of times it was limited to mostly talk and not training. And this is when it hit me how poorly a job was being done in world building because instead of this feeling like a franchise with interesting stories it felt like a random movie with one-dimensional characters. And since the story was going nowhere it all felt so lackluster.

One would think that at this time it would be understood that a movie should have a coherent story and it doesn’t work to just toss various events in just to pass the time. The Weapon X project being present in this movie made zero sense, and worse than that, I felt like I was watching a Scooby-Doo movie where Stryker would’ve gotten away with his dastardly plot if it wasn’t for some meddling kids. It even seemed like this movie was doing everything to make sure mutants were kept in situations where they were powerless because no one could come up with an entertaining action sequence. Since Apocalypse didn’t have an intriguing plan or goal, and his “horsemen” didn’t have any allegiance to him other than having nothing better to do, the bits and pieces of a story weren’t engaging at all.

The final act pitting the X-Men against Apocalypse and his horsemen had the most action, and it was mildly entertaining. It was longer than Fantastic Four and had a lot of redeeming qualities. I still couldn’t get over how stationery the characters could be especially after Captain America: Civil War but it was better than nothing. Maybe Apocalypse’s real goal wasn’t to take over the world but to destroy the X-Men franchise. If that was the case then maybe he was a better villain than the wasted screen time he was here.

X-Men: Apocalypse is a disappointing addition to the franchise, and as one of the characters stated, the third one is usually the worst. But even that attempt at humor isn’t enough to make up for an utter disregard for character development, a complete lack of understanding of the characters’ powers, and a story that feels like pages from the screenplay were lost in the middle of filming. Too many characters are wasted standing around throughout the movie and distractions like the Weapon X program feel like last-minute throw ins. If only Apocalypse had the power to take the X-Men movie rights away or at least force them to respect the source material similarly to Deadpool.