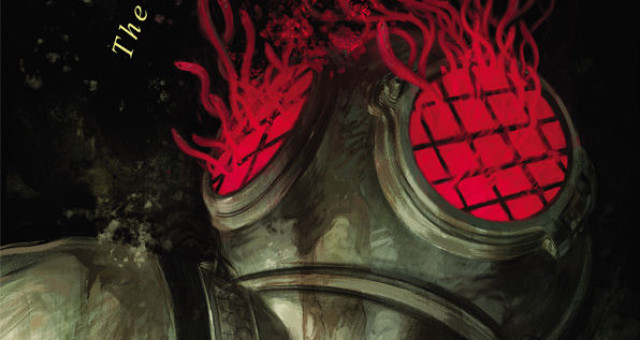 Witchfinder: The Mysteries of Unland #2

Witchfinder: The Mysteries of Unland #2 opens up with Sir Edward Grey describing his attackers to the police who are concerned with his perception of the town as a result of this assault. Well, Sir Edward tells the police that he was attacked by ruffians who were most likely foreign and not that he was attacked by talking magical eels who were barely able to escape. And as a result of this he wants to retrace Neal’s steps in order to figure out what it was he discovered that led to his death. The first stop they make after breakfast is at the town’s factory where the elixir is created, and Sir Edward is told how the elixir has transformed the town and funds its operations. He’s informed that only Sir Horace and his immediate family know the entire formula but the employees know parts of it, and are treated with the utmost respect with a system in place to reward them based on their behavior. When he meets Sir Horace’s son he gets a little information about Neal’s activities that day but since it was Sir Horace, who is reportedly suffering from bad health, who escorted Neal around, he doesn’t get the entire picture. However he’s introduced to  Diggory Fenn who was with Neal and Sir Horace on the tour. Once again everything seems picture perfect but the last time Sir Edward thought that he was attacked by giant eels, and now that he’s committed to investigating the town things are sure to become more dangerous going forward. 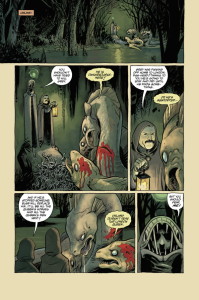 I loved the first issue including everything from the characters to the action, and the pace was a perfect setup to the series. So not only was I looking forward to this issue but I had high hopes for it too even though I wasn’t entirely sure what was in store. The banter at the start of this issue was entertaining as Sir Edward’s wit was on display with his statement to the police, which was entirely true, and I enjoyed the humor in him humoring them. I also appreciated the impact of the elixir on the town in terms of the economy being shown because it only deepened the suspense knowing so much of the town appeared invested in it so one had to be wary of just about everyone. The beauty in Witchfinder to this point is the excellent writing and the way the story flows but one of the things I love is how meaningful the panels are where nothing is said, and the little nods or actions add on to the suspense and mystery in such a subtle but crucial way. So it’s not just about reading through it as much as it’s about experiencing the story and the artwork because I wanted to take my time and observe everything. So whether or not a character who makes a certain gesture when Sir Edward is in the factory or the way something is written on a board will have significant meaning later on in the issue or series, it FEELS as if it does in that moment and those tantalizing suggestions have to be appreciated. Even the creepy feeling of the town would emanate from those who most likely meant well towards Sir Edward. The story would progress wonderfully again this issue as he would get more leads in his investigation and more is shown regarding the nature of those who attacked him and other players involved in that. As always, no spoilers, but things truly escalate and I can’t wait to see how things go from there. There is no action sequence like the first issue but Tyler Crook’s artwork, which I loved in Bad Blood, is perfectly suited once again for the gore on display this issue. Witchfinder came across my radar a few months ago and now it’s one of my favorite series.

Witchfinder: The Mysteries of Unland #2 is an excellent follow-up issue that continues the blazing start to the series. The heart-pounding suspense is just one of the many enjoyable aspects of the writing and the way the story flows as you’ll be so engrossed in the mysteries and the events unfolding, the excitement won’t stop until you close the book. And Hallam now being a fully realized town makes what’s at stake feel real and solving the mysteries that more vital. Two issues in I’m fully onboard and can’t wait to see where Sir Edward takes it from here.