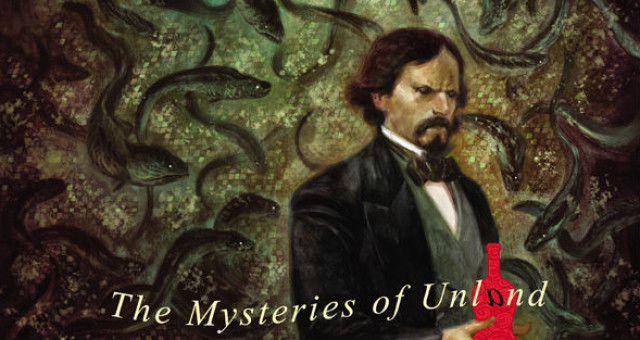 Witchfinder: The Mysteries of Unland #1

Witchfinder: The Mysteries of Unland #1 is a new series written by Kim Newman and Maura McHugh and published by Dark Horse comics, and it features Sir Edward Grey, an investigator of the occult. Sir Edward Grey makes this clear to the Queen’s servants who are performing an autopsy on a victim he initially believes was due to a simple murder. But they explain to him that the murder victim was a crown servant sent to Hallam to investigate a popular potion called Poole’s Elixir, which the Queen used as well, and he ended up drowned in it with some unusual electrical burns too. The circumstances become more mysterious when they tell him that the elixir is on the verge of receiving a royal warrant and that would allow the creator to make a fortune from it. Not convinced that the murder involves elements of the occult, Sir Edward decides to visit Hallam to put an end to their appeals. When he arrives the town is pristine and doesn’t appear to be the type of place where a gruesome murder could occur let alone have inhabitants capable of doing such a thing. At least that’s what’s stated by the Constable who is intent on telling Sir Edward that it had to be some kind of fiends from out-of-town or some similar scenario. Seeing as how Sir Edward received a warning about a phantom while on the train to Hallam he would be wise to heed it or else he could end up like Arthur Neal, the crown servant who was the last one to investigate Hallam. 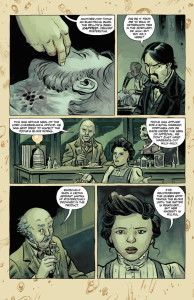 As I mentioned in my preview of this issue, I loved the opening tone of this issue, and the way Sir Edward’s character was established, in terms of his general personality, so seamlessly struck a chord with me and immediately made this issue more engrossing. The description of Hallam was effective in portraying it as a town hiding secrets behind its perfect facade but I would have liked to see some of that too but the panels just focus on Sir Edward and the constable.The artwork with its black and white dominance seems well-suited for the tone of the story but there was an interesting break when detailing the suspicions of the constable, and it’s too early if that was intended to have significance for later in the series with the way it was presented or if it was just a deliberately quirky moment. And that’s what’s so good about this issue because the mystery and suspense is built up without being confusing or feeling like events are just being delayed, and that’s a credit to the excellent writing. I wasn’t completely familiar with Sir Edward Grey’s history or his capabilities but that wasn’t a problem here as there’s nothing in this issue that requires previous knowledge of his history. However you will be left very impressed as I was when the action starts because it’s electrifying, and this is where the artwork shines because every action panel is intense, proving that Sir Edward Grey is more than just a sharp mind and a British accent. And I can’t wait to see where he goes from here in uncovering the mysteries of Unland.

Witchfinder: The Mysteries of Unland #1 is an excellent start to a series I had high hopes for  and it didn’t disappoint as it created the right amount of intrigue with its setup and its heart-racing action provided the necessary punch to finish things off. Sir Edward Grey comes off as an enjoyable character whose personality traits  and abilities have so much potential for an entertaining series, and as the mysteries are unraveled I believe the journey will be well rewarded.