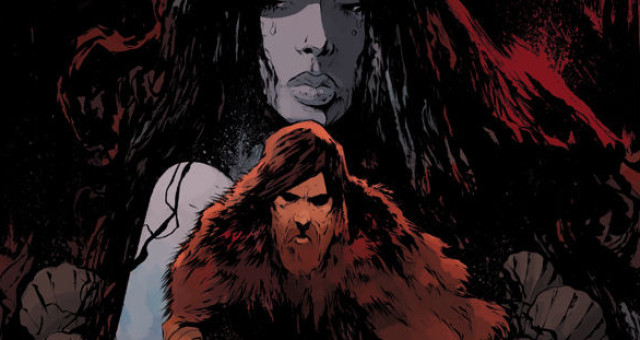 The Witcher #5 is the conclusion to the series that has Geralt investigating the strange occurrences at the Glass House deep in the Black Forest. It opens up with Geralt reaching the top floor in the house where he discovers a disturbing image on a new stained glass appearing out of nowhere, and he discovers a body as well. He’s interrupted by Marta who claims she means him no harm, however he refuses to put his weapon away although he agrees to listen to her story. It’s already been established that she’s not a Bruxa and he inquires about her true nature, and she tells him she’s cursed just like the house. They discuss what Jakob told him and then she tells Geralt how they met, the issues they had throughout their marriage and Jakob’s view of it. She recounts the fateful night that led to her current situation and the anger she has felt ever since. She offers Geralt immense riches from the travelers who were killed in the area and she wants him to kill Jakob. Can Geralt do it knowing the betrayal behind Jakob’s lies or is he forbidden as a Witcher to make a deal with a monster? 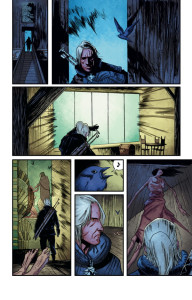 As a huge Witcher fan I was very excited for this series, and after reading the first issue I was impressed with the premise and its deliberate pacing, which implied there would be a story to chew on. However the last few issues have felt more like a delay than a story to feel engrossed in, and one main thing became very obvious since nothing else was occurring, and yet it was still delayed. This issue starts off much faster and even though the truth was revealed early on and confirmed what was obvious, the depth of the back story given by Marta was actually surprising and more reflective of the original tone of the premise laid out in the first issue. Of course this would be the most character development for Marta or Jakob than the entire series but I found myself being drawn into the story as the truth was revealed and the nature of the characters were made apparent. And what was so enjoyable about this turn of events was the way even subtle things from the first issue were given a context so every stare, every lie, and every shadow felt like it had meaning. I refuse to give away any spoilers so I’m being vague but the twisted nature of one of the characters and the true intentions were riveting, and every blow landed or attempted was a manifestation of that twisted nature. However the fact that this issue stood in such contrast to previous issues in terms of story development was hard to ignore and despite being very entertaining there was nothing that convinced me that this couldn’t have occurred at least 2 issues earlier. As a result of the series taking so long to reach this point some of the more interesting developments couldn’t be explored further. And so the metaphor of a glass house doesn’t resonate throughout, and although this issue is satisfying it leaves me wondering “what if” for the series.

The Witcher #5 is a satisfying issue that brings a conclusion to Jakob and Marta’s tale but leaves other threads wanting as a result of certain story developments not taking place until this issue as opposed to earlier in the series. Even though some aspects were obvious a couple of issues ago some developments were still surprising and entertaining. And the artwork by Joe Querio is at its best when the twisted natures of the characters shine through among other things. If you’re a Witcher fan or enjoy fantasy elements mixed with intrigue then you might want to consider this series if you have patience on skip some middle issues. I just wish it was more eventful throughout.