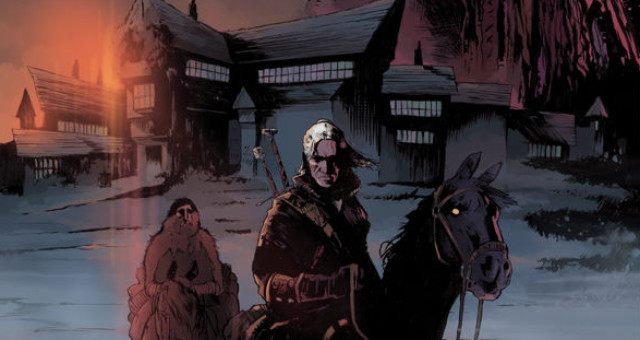 The Witcher #2 continues the story of Geralt as he travels through the Black Forest and House of Glass with his new friend, Jakob, as they search for the latter’s wife. Considering the trouble they’ve already faced they’re suspicious of the door to the house being wide open, Geralt more than Jakob, and they treat it as an obvious trap. Geralt’s medallion is also registering dark magic and the sort so it only makes him feel even more uneasy but they push ahead getting separated in the process. There’s no sign of Marta, Jakob’s wife, or anyone else in the House of Glass. This wouldn’t last long as they’re ambushed by a ghoul who’s seemingly impervious to Geralt’s strongest attacks and who Jakob doesn’t stand a chance against. Geralt finally overcomes it but it doesn’t die, nor was it ever really alive, and instead it wanders off leading Geralt and Jakob to an even more gruesome find. Was it a mistake to pursue Marta into the House of Glass or is it just another day in the life of a witcher and a future story to be told? 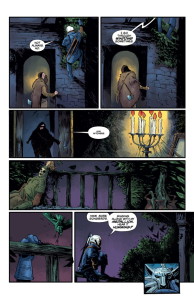 I thoroughly enjoyed the first issue from the tone of the story to its pacing, which I felt captured some of the intricacies of the character very well, as well as the artwork and the creepiness oozing from every object creating the perfect setting. Everything wasn’t as it seemed as the events unfolding were very intriguing and this issue starts off the same way as the mystery deepens. The action’s really good here as Geralt uses some of his witcher abilities, and fans of the games (or books) will enjoy seeing that. However the story seemed a little more plodding this time around and I understand that it allowed for another witcher ability, immunity to most poisons, to be explored, but I also didn’t mind it too much because I feel at this point it’s just building up the story considering the length of the series. I’m not sure if two sequences of characters enjoying food and drink were necessary but it also seemed like this issue was hinting at something very strongly, almost too obvious, and if that’s just my thinking and not an actual story development down the line then that’s a nod to the great suspense that Paul Tobin has created with these issues. I am hoping that the story developments next issue make things somewhat clearer but I can imagine from the standpoint of one who’s unfamiliar with the Witcher series appreciating the finer points being made about the character since these are things I already appreciate. Overall this was an enjoyable issue that makes me feel more confident in the payoff as the series progresses.

The Witcher #2 is an enjoyable issue and another treat for fans of the Witcher and those unfamiliar with the character alike. There’s plenty of tension being built with the deliberate story being crafted by Tobin and the action is entertaining as we get a taste of the Witcher’s abilities. The new character is intriguing and I’m hoping some answers are given regarding the entire situation, and after two issues I believe the payoff will eventually be worth it.