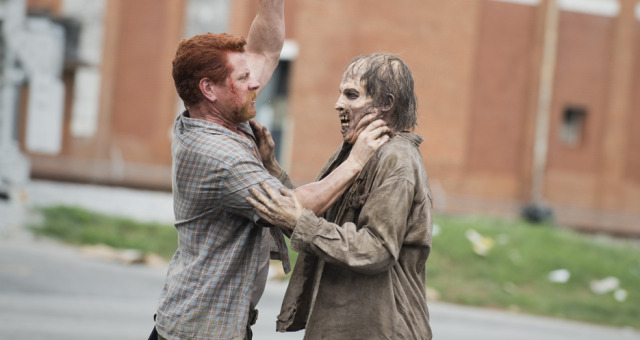 The Walking Dead: Self-Help is the 5th episode of the season and focuses on the crew traveling on a bus to D.C. so Eugene can implement his plan to reverse the zombie apocalypse. Spirits on the bus are relatively jovial due to the belief that things will finally change for the better, and everyday won’t be a struggle for survival in the same manner it is now. At least that’s what Abraham and Rosita are feeling as they don’t shy from public displays of affection and jokes about Abraham’s hair. This light-hearted vibe prompts Tara to ask Eugene about his mullet, and why he has one. Instead Eugene is focused on recent events and how the killings in the church disturbed him, and his thoughts on Father Eugene, and how it’s important for him to save the world. However when Maggie and Glenn probe too deeply into the details of how this will be done Eugene states that some of the information is classified. And even though the world is in chaos now, he states that once things return to normal it would be dangerous for that classified information to be out there. And he finally humors them by explaining why he has a mullet. But the jovial mood on the bus doesn’t last long as something blows underneath it while they’re driving and it hits another vehicle and flips over. Of course this crash attracts the walkers in the area and even if no one comes out of the crash badly injured they’ll still have no means of transportation. So should they head back and regroup with the others or keep pushing forward? And even if they make it to D.C. will Eugene’s classified plan work? 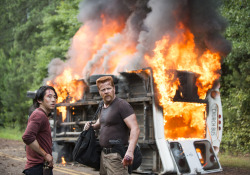 After last week’s episode I was looking forward to this one dealing with more interesting and exciting events. So thankfully this episode would return to having great story progression, almost following a pattern of every other episode making really good progress. This episode would start off good with Abraham and Rosita’s interactions and then Eugene entering into one of his rambling bouts about the Human Genome Project and how he can’t tell anything because it’s all classified. And then once the bus flipped over due to an unusual failure the stakes changed and instead of it being about reaching D.C. for a cure, it became about survival once again. However, the crash would prompt a flashback in Abraham’s life when the zombie outbreak first started. After killing all the walkers in the grocery store he would remember his wife and kids back home and would rush to return. Even though this first flashback was brief I was glad to finally see something from Abraham’s past since practically nothing has been shown about him, Rosita and Eugene since they’ve been introduced. But the action would start as the entire crew would have to escape the van and take out all the walkers coming at them while protecting Eugene. This was an intense scene not because there was true fear about any of the characters being killed but because it was shown from Eugene’s perspective in the sense that the circular pan of the action would have Eugene as its fixed point. And he would eventually get his first kill ever, and the emphasis on Eugene’s safety would stress the importance of his plan, and his perceived value to others. 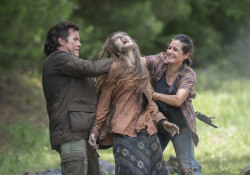 So even though Glenn and Maggie were along for the trip they would pretty much be peripheral characters as the character development would focus more on the other 4, although Glenn would have to be the one to consistently attempt to keep Abraham in line. And that’s one of the issues I had with this episode, and that was Abraham increasingly getting belligerent and irrational despite everyone supporting him. And considering how careful he was to keep others, and in particular, Eugene safe, it made very little sense for him to put everything in jeopardy by being angry even at the acquisition of basic supplies for the trip. This would play into his backstory and desire to end the zombie apocalypse, and this was done by showing his interactions with his family and everything that happened with them. More would be revealed about Eugene’s character, such as how he discovered Pornhub in the zombie apocalypse by secretly watching Abraham and Rosita have sex until he was busted by Tara. He would reveal his mindset to Tara, not just about watching them have sex, but how he views himself in the group, and also why he did something that I won’t reveal here. This sequence was entertaining, and it raised the question of who has “value” in groups and what has made this crew different from others they’ve encountered. There would be other interesting character development moments with Eugene throughout this episode. And Rosita’s backstory wouldn’t be revealed here but considering she would have to be at odds with Abraham as well, she would have her most screen time probably since she’s been introduced. 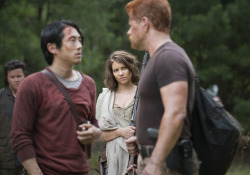 There would be plenty of action throughout this episode but clearly the character development would be the focus, and a shocking revelation that will be a complete game changer going forward, and the biggest revelation so far this season. And everything this episode built up to that moment, and clearly it will affect even characters who weren’t present. If you’ve already read the comic books then this won’t be a surprise to you but I did enjoy the way it was handled here, including the series of events and the flashback after this revelation. And now I’m anxiously waiting for the next episode that shows the aftermath, and to use a cliché, things just got real.

The Walking Dead: Self-Help was an entertaining episode that became even better with the biggest revelation so far this season, and the potential repercussions. I was glad that Abraham’s backstory would be revealed here giving more depth to the character and his motivations, although I felt the exaggerated belligerence at times in the present took away from the reality of the situation unnecessarily. And Rosita and Eugene’s development would be just as entertaining with the latter also serving to raise the question of perceived value in this apocalyptic world, and what one does to survive. Although I believe next week’s episode will focus on Beth’s situation again, I’m looking forward to seeing the fallout from this huge revelation.