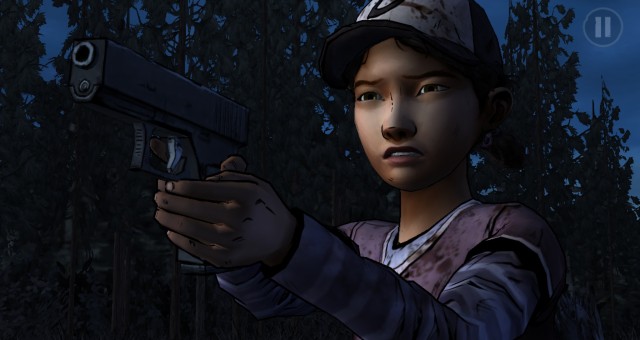 The Walking Dead: A House Divided

The Walking Dead: A House Divided is the 7th episode in the series produced by Telltale Games and opens up with Clementine in danger following her, Pete and Nick being ambushed by walkers near the river. However Clem was able to escape temporarily and she’s holed up with either Pete or Nick (depending on choice made at end of episode 1) in a shed and a horde of walkers trying to get at them. Despite attempts to find another way out, the only thing that’s discovered is an abundance of booze contained in numerous jars as if the previous occupant knew whoever entered would end up in a hopeless situation. But Clem refuses to give up and the plan is to wait out the night and hope that  by the morning the walkers should mostly be gone. When Clem wakes up to the sound of glass breaking and walkers outside it appears the majority of them have left and so they decide to make a break for it. But when they get outside they’re ambushed once again and a distraction is made so Clem could get away unharmed and let the others know what happened. Upon returning to the cabin Clem learns that Luke and Alvin went looking for them, and so Carlos and Rebecca decide to go as well knowing what occurred, and Carlos asks Clem to watch out for Sara while they’re all gone. Things have changed quickly with Clem having the trust of everyone in the group but when a stranger visits the house while they’re all out, and apparently knows the group, Clem starts to wonder if everyone in the group should’ve earned her trust as well.

I really enjoyed the first episode in season 2 and I was really impressed with how Clem transitioned from her role in season 1 to the protagonist in season 2. I did however feel that the other characters were borderline caricatures for the most part, and the graphic shock value of Clem’s situations were intended to conceal that instead of having the well-done character development and choices of the first season. The Walking Dead: A House Divided started off in a way to put this episode on the path to rectify that, and it succeeded with the interactions in the shed between Clem and the character(s) with her.  In my main game I chose to save Nick at the end of episode one because Pete was bitten, and in the shed Nick chose to drown himself in the booze and just give up completely. He would share some of his back story and it was pretty compelling and a reminder of the extremely difficult choices everyone had to make at the start of the zombie apocalypse. This also put Clem in a position to take the lead and for it to feel believable considering all that she’s experienced in the 2 seasons. The controls are the same as previous episodes with a threat far more dangerous than the walkers being the selection of an answer you didn’t want because of the time given. Although in this episode there’s more than enough time to read the various responses and choose your preferred answer, and they do vary enough to make the choice feel significantly different. QTE’s are back too and I found the controls to be more responsive than the first episode, and I was pleased about this during Clem’s first escape sequence.

The story this time around starts off very intriguing too as you’re left with Sarah and you have to make a decision on whether or not to truly interact with her (teach her how to defend herself, for example) or just do so because Carlos asked. And during this time a stranger lurks around the house and eventually knocks on the door inquiring about those who live there. He forces himself in but instead of harming Clementine he’s looking for others and apparently knows the group. And when the others return and learn of this it sets them off with Carlos immediately deciding to move the group, and no one wants to answer Clem’s questions about who the man actually was or their history with him. And considering the stranger left Clem with a dire warning to not trust the people she’s with, all the interactions have a certain tension attached to them and makes your choices an even more interesting gameplay mechanic. In season 1 the relationship between Lee and Clem was profound, both were very interesting characters, and everyone they came across benefited from that in terms of giving them a context based on those interactions and made it memorable. And so what was impressive about this episode was not only how a lack of a bond or strong character was turned into an interesting story line but the gross apathy towards Clem in episode 1 was put into a better context as the choices all took that into consideration as a matter of trust regarding survival. This was crucial because I still didn’t feel strongly about any of the new characters this season with Sarah probably being the most interesting out of the group because of the way she’s treated. And I won’t give away any of the story but as the group advances to its next destination the story becomes more engrossing and decisions are made that drastically affect the situation the group faces.

Now there is action in this episode with there being plenty of action towards the end and it’s really thrilling. There was one exciting sequence on a bridge where I thought, “wow, Telltale has really found the right balance with the storytelling and the action,” and this was even before the best action sequence in this episode. So by no means are you just an observer of the events taking place and this was something I could truly appreciate. There’s a legitimate surprise that considering what I mentioned about the characters should elicit a relatively strong emotion, and most likely a good one. And with each episode Clem becomes an even more compelling protagonist and it’s impossible not to feel engrossed in what affects her and the choices made, and this is truly carrying the season. Despite the group facing a life or death situation, I wasn’t extremely impressed by the main antagonist or his motives for pursuing them but it was decent, the actions meaningful, and I expect it to hold more weight as even more is revealed next episode.

The Walking Dead: A House Divided is an extremely engrossing episode that takes the weaknesses from the first episode and improves on them by incorporating them into a suspenseful story headed by the ever-impressive Clementine. Her experience from last season and this one is written all over her face for good or bad, however her survival says a lot in contrast to the other characters and it makes the journey more meaningful. From the beginning of the episode to the last scene it’s a nonstop rollercoaster ride that finds the perfect balance between story and gameplay, and also adds some light-hearted humor along the way with its running joke of Clem’s appearance. And the conclusion of this episode has me hooked to season 2 already and I can’t wait to play the next episode. 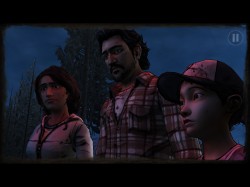