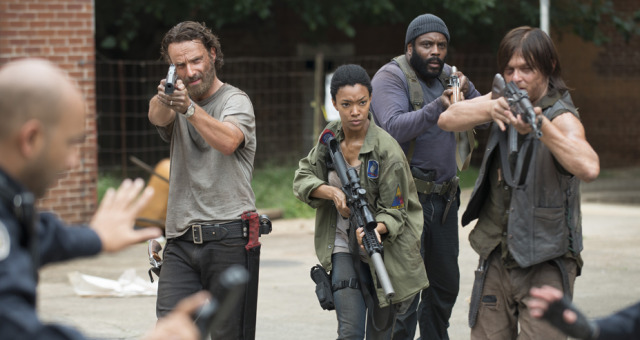 The Walking Dead: Crossed is the 7th episode of the season and has the crew tracking down the members of the mysterious group responsible for taking Beth and Carol. It opens up with everyone breaking down pieces of the church in order to fortify it. Sasha is still reeling from Bob’s death and it’s very noticeable with the way she’s breaking down the benches. Gabriel watches all of this and wonders how much more of his church will be ripped apart considering the massacre that took place, and he can’t get his mind off the blood stains that still remain on the wooden floors. He doesn’t understand or maybe he doesn’t want to understand the necessity of Rick and Michonne boarding up the windows as part of the fortifications as his concern is more about the overall integrity of the building. But considering the news Noah brought regarding the group that took Beth, and Daryl’s brief experience with them, they’re not taking any chances as they prepare to mount a rescue mission to retrieve Beth and Carol. It won’t be the entire group as a few of them will remain behind since they all have to eventually rendezvous with the group that got a head start on the road to Washington. What they don’t know is that trip has been everything but easy with supplies running low and Eugene knocked out cold in the street by Abraham, who was enraged Eugene was lying about a cure. So even if the rescue operation is successful, what lies ahead for the group once they discover everything about Washington D.C. was a false? And who is this mysterious group at the Atlanta hospital? 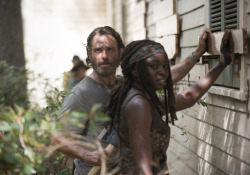 After last week’s episode, which had its ending somewhat spoiled with the events in the previous week, I was looking forward to seeing the aftermath in these situations. And this episode started off really well in all of them whether it was Sasha taking out her emotions on a church bench, Rick and Michonne talking about going to Atlanta, or Abraham being so pissed off he refused to talk to anyone. Sasha’s behavior would mirror Father Gabriel’s in terms of the almost obsessive-compulsiveness regarding church property. And it’s not so much what this would say about Sasha but about Gabriel, who still refused to adapt to the world of the zombie apocalypse. Sasha would however be a part of the rescue mission along with Tyreese, Daryl, Noah, and Rick. Sasha wouldn’t be ready to talk to Tyreese about Bob despite him reminding her that he’s been there himself with Karen. And I’ve been up and down with Tyreese’s portrayal but this was definitely one of his better episodes. Not only would he be there for Sasha offering his support but he was active in discussing the options in the rescue plan and the initial focus on stealth. So the plan wouldn’t be to go in guns blazing, and with Noah’s knowledge of the hospital’s structure, guards and wards, they could assess what they needed to do to get in and out. However, Tyreese would suggest capturing some of Dawn’s officers while they’re on patrol and use them as part of a prisoner exchange. So they would get to work and use Noah as potential bait in order to ambush the officers. 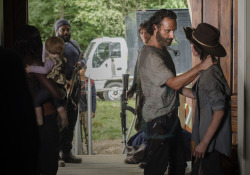 The other group heading to Washington wouldn’t be sitting idly by either, but that would be due to the necessity of finding more water for their return journey. This situation would be pretty intense as Abraham wouldn’t even talk to Rosita, and would go so far as to smack a water bottle out of her hand before becoming even more menacing. Maggie would be the one to put him back in his place, which was the equivalent of giving him a timeout, by making it abundantly clear that she would put a bullet in him if he didn’t sit back down. This was an interesting scene as the fallout continued, and Maggie would be given more to do on her own this episode than in a while. Everyone here was coping with the truth being revealed in their own way. Tara would use humor while trying to defend Eugene, and Rosita would feel more betrayed than anything. I enjoyed seeing the character development from a couple of episodes with Eugene and Tara still carrying over here. But Rosita’s character development this episode would be entertaining as she would reveal how she first met Eugene, and how he made her feel needed for his important mission as opposed to how things were for her before this. And just like Maggie would state to Abraham, he wasn’t the only one that is currently suffering from Eugene’s lie because it meant something to each person in their own way.

This episode would mostly build up to the mid-season finale but it would do it in a much better way than a couple of other episodes so far this season because it had really good action, character development, and even the situation in the hospital would be more enjoyable for me. Of course the action would consist of the plan to free Beth and Carol with Daryl’s improvisation with a walker head being one of the more memorable scenes this season. But it just felt like every character this episode would be impressive and true to themselves, and a huge part of that is the culmination of the character development to this point. So Rick would have his moments, and even Beth would be remarkable in the actions she would take in the hospital. It wouldn’t just be the main characters because Dawn would come off much better this episode as her motives and actions would become more intriguing. The only thing I would point to is the way the hospital structure isn’t made clearer in terms of their motives and overall philosophy. Yes, it could just be random because there would have to be other pockets of survivors just trying to make due with what they have but the coordination, kidnapping and yet twisted attempts to treat those they hurt suggests otherwise. And I still wonder where they would get all their supplies to take in so many new people. So now I’m anxiously looking forward to see what answers are ahead regarding that and some other things. And if the final events in this episode are any indication then the answers should be pretty good either way.

The Walking Dead: Crossed is a very good episode that sets up the mid-season finale in an impressive way. This wasn’t the most action-oriented episode this season but the character development was excellent, and even the characters appearing for the first-time were impressive in their roles. So at this point in the show there are more characters with various motives, personalities, and backgrounds than I can think of in recent memory, and probably since the prison. The plan put into motion to save Carol and Beth would move at a deliberate pace but still enjoyable as a result. And the situation at the church and on the road to D.C. would be just as intriguing. I’m hoping the overall situation in the hospital becomes clearer in terms of motivation and not just about Dawn trying to maintain a tenuous alliance within the hospital. I’m not sure what’s ahead in the mid-season finale but this season overall has been excellent, and I can’t wait for the next episode.