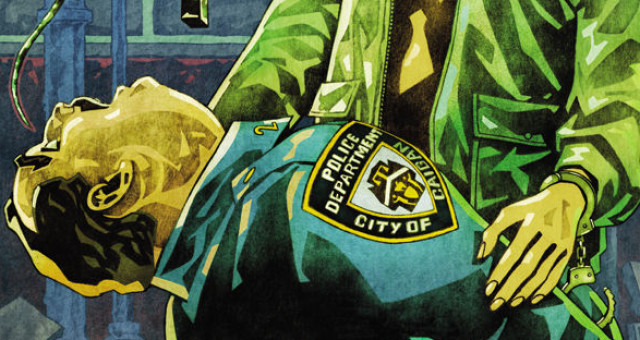 Veil #2 picks up with Veil and Dante on the run after he witnessed her awesome display of power in controlling their attackers and getting one to kill the others before turning the gun on himself. Dante isn’t sure what to think other than still wanting to protect Veil and this shows in his confusion on where to go so they end up in a diner. The most he can do is hope that cops don’t come in and find them because even though he didn’t kill those people it did occur right in front of his apartment door. Veil is unconcerned with that and still wants an answer to the question she asked: who is she? He can’t answer that and of course he doesn’t know how she was able to control others or move dumpsters with just a thought so he’s more focused on how it’s possible she could even do those things. His kindness to her is what drove her to him believing he wanted her and her powers are what made him apprehensive after initially wanting her. They may not have the answers to what she is but one man who performed a ritual at the request of an organization just might. The belief is the ritual didn’t work and those who paid for it feel they were robbed by a charlatan, and not to mention the cost of the lives sacrificed as part of this ritual. But this mysterious man knows better and he’s hiding the truth of what occurred with the ritual. This doesn’t bode well for Veil and Dante who are both at a loss of who and what she is or who might be looking for her. 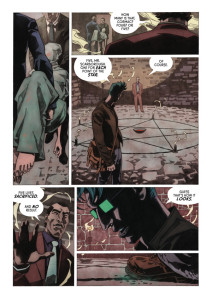 This series was off to a great start with the first issue and I liked how this one started off dealing with the aftermath of those events with Dante and Veil. Dante’s incredulous response to what he witnessed was very similar to how I felt with those shocking developments so it was very believable. And the artwork was just as effective here in establishing the tone, and it’s very beautiful in the way it tells a story and conveys events and emotions even without words. And so the relationship between Dante and Veil continued to be intriguing as they both searched for answers and strove to come to an understanding. So when this issue showed the one most likely responsible for her being conjured and the fact it was originally so a criminal organization would have incredible power, I was really into this issue. Cormac comes off as incredibly sinister while providing some answers to Veil’s origins and the mystery deepens with his ulterior motives as well as the organization’s motives being introduced.The action wasn’t as shocking as the first issue but still enjoyable. And I won’t give away any spoilers but the issue became less engrossing for the same reason as the first issue except it occurs much later this time, and I truly hope these type of encounters aren’t used as a catalyst in every issue. Aside from that this series is off to a very good start.

Veil #2 is a solid issue that builds on what made the first one enjoyable, and with a hint of Veil’s origin and a new character it becomes even more intriguing going forward. The visuals once again are very pleasing and its details and use of colors easily pull you into the world being created in this series. The character development started off strong again but I would really like to see a different catalyst used to advance the story next issue or else an opportunity will be squandered and the characters will come off as one-dimensional since there’s only one possible response to that type of situation. However I am looking forward to the next issue as things should become even more interesting for Veil and Dante.