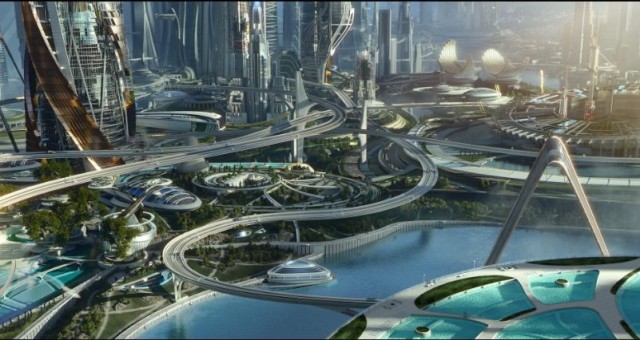 Tomorrowland is a sci-fi film about a young girl, Casey Newton, who is given a glimpse of a futuristic world in another dimension as she actively seeks to gain access to it with the help of a man, Frank Walker, who once lived there. It opens up with the two of them recording a message attempting to explain the current situation in Tomorrowland. Even though they can’t agree on how to tell the message they do agree that it starts when Frank was a young boy and attended the New York World’s Fair in 1964. He was a wide-eyed dreamer but also a boy genius who invented a jetpack but couldn’t get it to work consistently. His entry is dismissed by David Nix but he captures the attention of another young girl named Athena, who gives him a pin with a large ‘T’ and tells him to use it to follow them. Yet when he follows them and uses the pin to gain access to secret corridors, he’s transported to a futuristic world, and when he’s discovered by David Nix he’s allowed to stay. Fast forward to 2015 where Casey, the brilliant daughter of a NASA engineer, constantly sabotages the demolition of a shuttle’s launch pad by sneaking into the location and using her homemade electronics. She’s gained the attention of Athena, who somehow hasn’t aged, but she also attracts the police who book her for breaking and entering among other charges. Her father is able to get them dropped with his connections but Athena is able to hide a pin among Casey’s possessions before they’re returned to her. Since this pin is configured for Casey’s DNA, she’s the only one who sees this futuristic world when she touches it.  However, these images only last for so long and when the pin stops working Casey heads out to seek answers. But who is this mysterious young girl who never ages? And what is Tomorrowland and the looming disaster connected to it?

I was looking forward to seeing Tomorrowland since NYCC 2014 when they had the spectacular panel. With the futuristic world showcased in all the promos since is a film I wanted to see in all its glory because of the potential. Unfortunately this movie didn’t live up to that potential because most of this world wasn’t explained, and the very little of it that was shown was mainly when Casey touched the pin – very briefly. The start was pretty entertaining with a young Frank wanting to prove his jetpack was worthy of consideration at the World’s Fair, and therefore prove himself. His wide-eyed exuberance when discovering Tomorrowland set a tone I hoped would show up at least at certain points in order to form a connection to Tomorrowland. However this would be the only interaction with Tomorrowland that was done freely by a character throughout the majority of this movie. Things would then turn to Casey decades later, and this too was an enjoyable introduction to an exceptional character. So whether she was breaking into a NASA launchpad, interacting with her younger brother or being exposed to a simulation of Tomorrowland, Britt Robertson was very convincing in this role. When she decided to seek out another pin before Athena could contact and find her it felt like an organic decision and progression of the story due to the character’s determination. This also led to some cool action and the revelation of Athena’s true nature. I was pretty much into this even though I needed a little bit more to feel fully engrossed.

When the decision was made to seek out an older Frank I felt it was a good opportunity during the ride for the movie to elaborate more on Tomorrowland, Casey’s importance to it or at least more about this ominous event that was sure to happen. The problem is it didn’t do that as the banter was just meant to be humorous with very little substance. Usually this wouldn’t be a problem for me but considering they would be on the run for a substantial amount of this movie, even when Frank joined them, it felt like filler. Everything pointed to a major backstory that usually didn’t pan out relative to the buildup. Want to know why Frank was kicked out of Tomorrowland? Well you have to wait. Want to know what makes Casey so unique to fix this huge issue in Tomorrowland? Yep, you have to wait. In the meanwhile, here’s another chase sequence and more banter. A redeeming quality was the acting, which gave some life to these scenarios and sometimes puzzling characters. Frank as an adult was perplexing in light of knowing what did actually occur to him in Tomorrowland, and Casey became less useful for her skills and more for her stubbornness to just reach Tomorrowland. And there was no explanation for why others failed before Casey. And my biggest problem with this movie was that Tomorrowland was actually a great concept but its significance was practically ignored until the end. I won’t give away any spoilers, of course. But for example, one of Governor Nix’s speeches was on point about certain things in the world yet the movie didn’t play up the significance of Tomorrowland in light of that or its origins. (And why was the leader of Tomorrowland a Governor?) And I would’ve preferred to delve into why it was abandoned as opposed how disgruntled Frank felt about it one more time. And saving everything for the end made the most interesting parts feel rushed so instead of treating it as a grand finale, the concepts could’ve been incorporated more throughout. And maybe the characters would’ve had more development instead of the feeling of wasted potential. Ultimately Tomorrowland is a story about optimism and never giving up on one’s dreams regardless of age. I just wish the journey to get to that understanding was more profound and entertaining.

Tomorrowland is an uneven movie that leaves so much potential on the table by shelving the most engrossing concepts and development until the end, making it feel rushed. There are some entertaining moments leading up to the conclusion, and a few geniunely laugh out loud moments but the characters could’ve been more developed instead of spending the majority of time in chase sequences. The action and fight sequences are surprisingly intense, and I really enjoyed them. However, too many unanswered questions about Tomorrowland prevents this from being as impactful and memorable as I hoped.