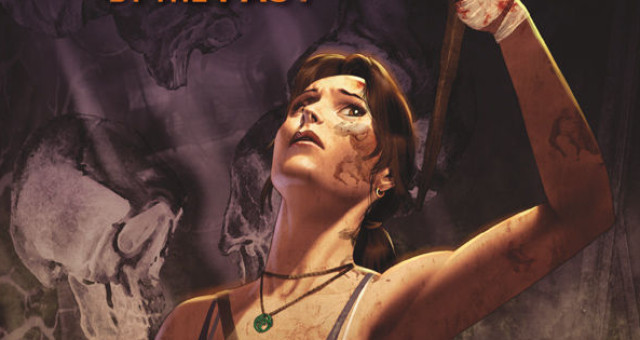 Tomb Raider #3 picks up with Lara and Joslin Reyes being surrounded by cult members of the Solarii threatening to kill Reyes daughter unless Lara gives them her piece from a treasure.  The only problem is Lara doesn’t even recall taking any treasure from the island so she can’t stop the countdown by revealing information she doesn’t have. Nor is she convincing when she claims at the last second to have hidden the artifact at her father’s house, so the leader orders Reyes’s daughter to be killed and everyone else in the bar but before they can someone opens fire on the cult members taking a couple of them out and creating chaos. Lara doesn’t know who the man is but he states he’s a friend and the cult members already know him to be an enemy to them. Lara and Reyes use this opportunity to try to escape from the cult members but they don’t give up so easily. And to think Lara believed she would never speak to Reyes again because of the falling out on the island and Roth’s death but here she is running for her life through the streets with Reyes and her daughter. Even if they do escape, the Solarii cult will still keep pursuing Lara and her friends so is it just a matter of time before the cult gains the upper hand again or will the tables finally turn with new friends? 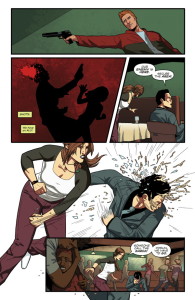 Since I made it a huge point in my review of issue #2 I have to start by saying the artwork is much better this issue and it’s not just the coloring or detail but the penciling for the sequences are more effective so the blows are more impactful and the chaos more believable. It still belies the mature tone of the story somewhat but overall it worked this issue. As far as the story is concerned this issue was the best one so far in giving a character’s backstory as well as explaining the current relationship with Lara without one being required to play the game to understand. Reyes comes across as a believable hard-nosed character with a soft heart but who is mourning her friend,  Roth, and blames Lara for that. It was an interesting character development for her but it also put Lara in a better light because it set the stage to understand her mentality from losing her loved ones and being at a considerably younger age. And Gail Simone does a great job in handling the characters and their previous issues with each other while moving the story forward. The mystical aspects of the story are still present but not as blatant and what is lacking in terms of revelations regarding what is going on is made up for with the character development. And not to give away any spoilers but there are developments that should result in Lara being placed in more familiar surroundings and set her off on an interesting adventure, and after 3 issues it’s time and I’m looking forward to it.

Tomb Raider #3 is a solid read and has the best character developments and interactions so far this series presenting a better picture of who they are and a foundation going forward. The action sequences worked much better this issue with the artwork and was quite enjoyable and I’m hoping that continues to improve going forward. Despite the chase going on a little bit long the developments were very intriguing and I’m looking forward to see where this takes the adventurous heroine.