The Wolf Among Us Episode 4: In Sheep’s Clothing

The Wolf Among Us Episode 4: In Sheep’s Clothing opens up with Bigby having a vision of Bloody Mary getting ready to decapitate him with the Woodman’s axe but he wakes up right before it happens. His reality isn’t much better as he’s in his apartment bleeding, full of silver bullets, and his bone protruding out of his forearm. However, a doctor is working on him attempting to remove the silver bullets while Snow and Colin are worried about his recovery. Since the doctor is preoccupied with removing the bullets, which could kill him, Bigby painfully resets the bone in his forearm so it could start to heal. The doctor warns them before he leaves that Bigby can’t keep taking punishment like this and if he doesn’t get enough rest it’s likely that the next encounter will kill him. One issue is Bigby’s actions during the confrontation and whether or not he’s losing control during his transformation. No one wants him to go back to how he was before but the question is how else can they fight in the face of these incredible odds. It’s not long before talk turns to the emergence of the Crooked Man and what his connection to Crane and the prostitutes could be but unfortunately they don’t have the answers just like they no longer have Crane.  But this time they have a better lead when Bufkin calls them to let them know that one of the girls from the Pudding Pie, Nerissa, wants to talk to Bigby in his office alone, and she has some important information for him. Is there finally a break in the case or will this information just lead to even more questions? 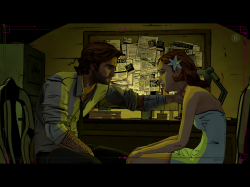 After last episode’s incredible ending and battle I was extremely excited to start this episode. First thing I noticed was the speed of the dynamic conversations and the big improvement. I wouldn’t attribute it just to being more familiar with this mechanic because I deliberately let the time on some conversations go to the very end even when I already knew the answer I would select. So the changes made here really made the conversations feel more realistic as you could interject with your answer even in the midst of a heated discussion or you could wait until a character finished talking. And the speed in which you selected your answers wouldn’t change the outcome but psychologically it could make Bigby feel more like how you would want him to be. So this was one of the ways the very start of this episode was very engrossing. Another way was the fact you had to repair your own broken arm with a combination of swipes and pushes. Originally I started playing this series on my iPad because I no longer had my Xbox and it wasn’t available on Xbox One but I’m glad I did because using the touch screen felt a lot more immersive than pushing buttons on a controller in this situation. And overall the controls were a lot more responsive so I didn’t encounter one issue like I did the last episode with sequences being difficult due to unresponsiveness. And the 3rd way was bringing into the discussion Bigby’s mortality considering how much damage Fables can take, and how difficult it is to actually kill them. This captured the gravity of the situation well, and elevated Bloody Mary’s actions because it raised the question of how best to respond, and what was needed to succeed. 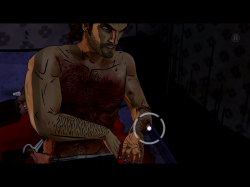 And so it allowed Bigby and Snow’s relationship to grow even more as they were in this together and truly there for each other. And this is one dynamic I truly enjoyed. And Colin was his usual self while also providing great comic relief without taking away from the serious issues at hand.

Up to this episode there really haven’t been any answers regarding the original murders, and the events surrounding them have been shrouded in secret. Of course, Nerissa couldn’t talk freely about everything she knew due to the spell but her hints would not only lead to individuals who could give answers regarding the Crooked Man but this encounter also revealed explicitly how the unknown murderer committed these crimes. This was a pretty intense scene and it was handled in a very clever way. There was a real sense of satisfaction from at least this part being answered. And the path it would lead down would be very intriguing and revelatory regarding the current state of Fables’ everyday lives. Last episode showed how Fables could make desperate decisions to make ends meet, and how that was manipulated by those behind the scenes. And it brought to the forefront what they’ve been dealing with since losing the woods. This episode still builds on that to make it more engrossing but also deals with those who used to live lavishly wanting to live lavishly again. So the corruption and manipulation would run deep but there were those who still wanted out. And choosing between which location to visit first would be possible again but the reason to choose would feel fresh, and make you feel invested in your choice.

And you truly investigate the operations of an organization that has been conducting its business with impunity but being drawn into the world of Fabletown is what’s truly fascinating. It’s clear you’re not in Kansas anymore. Oops, wrong material but you get the point. And so the reality of the characters is as diverse and captivating as one could’ve hoped when first starting this series. And it’s not all cerebral as there’s plenty of action to enjoy, and it’s remarkable how each encounter feels different due to numerous factors. And Bigby’s capabilities being revealed in these sequences are very impressive. And it’s not relegated to just a battle at the end. And so all of this coming together in the penultimate episode makes this the apex of the series so far. I could say that this is easily the best episode but that wouldn’t capture the fact that this was possible because of the excellent way the story has built up, how enjoyable the previous episodes were, and how immersive the world with its wonderful characters and setting. So the payoff in this episode for all that has come before it is extremely satisfying, and considering all the answers given here, I expect the final episode to truly be epic.

The Wolf Among Us Episode 4: In Sheep’s Clothing is an incredible penultimate episode that capitalizes perfectly on the suspense, character development, and events from the previous episodes and delivers the most thrilling one so far. From the opening scene to the final moment, Telltale Games has woven a story as meticulously as the doctor removing the silver bullets from Bigby to save his life. And like a renewed Bigby, this episode doesn’t hold back in revealing all that has been occurring behind the scenes that contributed to the original murders, and it is indeed engrossing. The timed responses work as well as possible with each conversation feeling dynamic without leaving you at a disadvantage to not have time to respond. And with the controls being very responsive this episode it’s easy to embrace the full intensity of the action sequences. And as expected, it leaves things at the right spot to have an explosive finale, and I can’t wait for that.