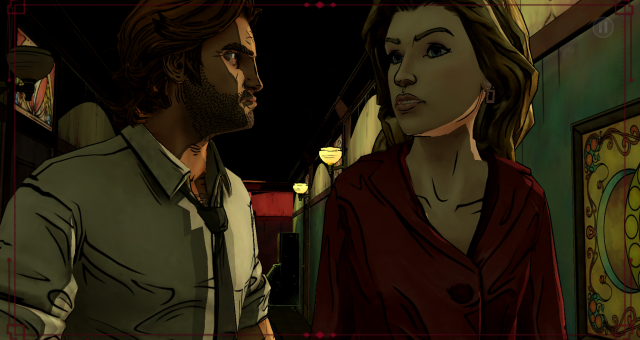 The Wolf Among Us Episode 2: Smoke & Mirrors

The Wolf Among Us Episode 2: Smoke & Mirrors is the second episode in the adventure series developed by Telltale Games and based on the Fables comic book series by Bill Willingham. Following the shocking ending of the first episode this one opens up the next afternoon with Bigby staring at a picture of Snow White’s decapitated head. He’s being interviewed by police at the station regarding this horrific murder and before he can finish, all the officers get dizzy and pass out at the same time due to Ichabod Crane’s spell. This spell wipes out all their memories and the two of them leave the station because the Fables conduct their own investigations independent of the general police force. And besides, Bigby needs to interrogate the suspect in Faith’s murder captured at the end of last episode, and when they arrive Bluebeard is already conducting his version of an interrogation, or rather just beating on the suspect. Clearly tensions are high due to Snow White’s murder and patience is low even for Bigby who has no tolerance for the suspect’s difficult answers or Bluebeard. And things begin to spiral out of control even more when Bigby and Bluebeard get into it and the only thing that stops them is Snow White shockingly walking into the interrogation room still alive. So if it wasn’t Snow White who was killed then who was it and why did she look like Snow White in the first place? 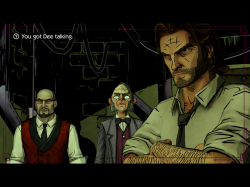 I loved everything about the first episode from the tone of it to the gameplay, and the shocking conclusion had me anxiously awaiting the second episode. And the interrogation sequence to start this episode was excellent as it was creative in the choices you had to make to get the suspect to talk, and this would in turn affect the balance of the nature of Bigby’s character between the wolf and the man. It was shocking to see Snow White walk in but it didn’t feel cheap nor did I feel like the story cheated in providing a shock at the end of the first episode only to undo it at the start of the second. And this was because the mystery deepened, and it wasn’t entirely clear if the target was actually Snow White or the one pretending to be her. And also Snow White didn’t fully grasp why they were so traumatized by this until later when she sees for herself.

The gameplay mechanics are similar to all Telltale games and the majority of sequences have timed responses, which could feel like speed reading in a couple of cases. But I felt this one pushed the limits of interactive storytelling more so than any of the other games because after the initial interrogation scene and subsequent interview of Toad’s son it was pretty much selecting the only option available to advance the story for a good while. It’s possible to walk around freely in many locations but it was only possible to interact with the objects or people who were highlighted. There were no multi-step puzzles to solve and nothing that could be overlooked for the majority of this game, and the longest QTE sequence, which was actually enjoyable wasn’t until late in the game. Now, this doesn’t mean it wasn’t enjoyable because the story was still very engrossing and the strength of this episode was once again the wonderfully twisted adaptations of well-known fairy tales characters and the world they inhabited.

And this episode does an excellent job of pulling you into this world even more in various ways including the examination of the body that resembled Snow White and understanding how that was possible. And the underworld of Fabletown is as shady as it gets and in that context it explains why so many fables have been viewing Bigby and Snow White suspiciously because their naiveté or willful ignorance of all that could occur in this underworld. I did have to laugh at Georgie Porgie being the owner of a strip club called the Pudding and Pie, for example, but all that occurred there was no laughing matter and what was behind the scenes was even worse. It’s very difficult not to be engrossed in the story and what it lacks in puzzles it makes up for in ways with the ability to truly make Bigby behave how you want, so instead of choosing the character’s actions you’re shaping the character’s personality as you please. And as the story unfolds the mystery of these murders becomes more intriguing and I won’t give away any spoilers but the story that is crafted takes advantage of the player’s interest in the mature adaptation of these characters and creates an even creepier murder scene. And the ending of this episode wasn’t as shocking as the ending in the first episode but it was extremely well done and left me in anticipation of the next episode just as much.

I played this episode on my iPad since I no longer have my 360 and it seemed to be slow transitioning between certain major scenes but outside of that it was very responsive. And I played this episode without my original save file and choices but it didn’t cause me any problems as my choices were pretty much reflected in the starting situation. However I still recommend playing the first episode in order to be more invested in the story. 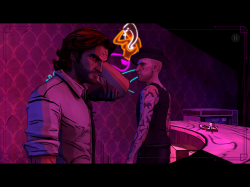 The Wolf Among Us Episode 2: Smoke & Mirrors is a very engrossing episode and pushes the boundaries of interactive storytelling as the main game play mechanic. It’s not difficult or challenging as the story advances regardless of your choices but the strengths of this episode are the engrossing story, interesting choices and character development including the ability to shape Bigby’s character to your liking. And there are enough intriguing situations and story developments to keep my interest in this series very high and I can’t wait to see what lies ahead in the remaining episodes.