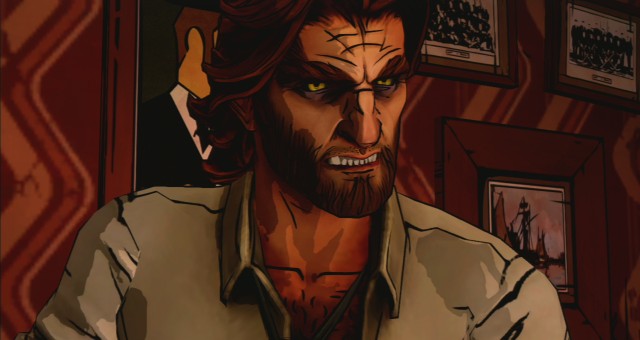 The Wolf Among Us Episode 1: Faith

The Wolf Among Us Episode 1: Faith is the first episode in the ongoing series by Telltale Games, the developer of the critically acclaimed Walking Dead series, and is based on the Fables comic book series by Bill Willingham. It features you as Bigby Wolf, aka the Big Bad Wolf, as the sheriff of Fabletown, an area in NYC where fairy tale characters are struggling to make ends meet while dealing with the psychological trauma from their former lives, i.e. the dark side of the fairy tales we all know. It opens up with Bigby arriving at a tenement building in the south Bronx. He’s met by Mr. Toad, who is committing a crime by not concealing his true appearance, and is informed that the commotion upstairs is being caused by the Woodsman, who has a history with Bigby. But the commotion isn’t directly due to the history between the two because as soon as you walk in you see the Woodsman slap some unnamed woman, who is undoubtedly another Fable. After the situation escalates into an all-out brawl that ultimately ends with an axe embedded in the Woodsman’s skull (he’ll be fine), you find out that the woman he was slapping around in the apartment is a prostitute. And what started the commotion wasn’t an issue of money, although that would now be an issue since the Woodsman had none on him, but the fact that the prostitute didn’t recognize who he was when he asked her that question. He took offense because he’s the one who saved Little Red Riding Hood from the Big Bad Wolf in a life gone by, and now the wolf is the sheriff of Fabletown and he’s just a drunk who likes to beat on women and forgotten. He threatens to kill the woman in his pummeled state, and she’s also short money because of his inability to pay, two potentially life-threatening predicaments. And sure enough she shows up dead in a way that sends a clear message to Fabletown. But could the Woodsman commit murder or was it someone else in the life of this troubled prostitute? It’s up to you with the help of Snow White (yes THAT Snow White) to not only discover the identity of this murdered prostitute but find her killer and this will lead you down some paths that are even dark for Fabletown.

In case it wasn’t clear from the introduction, this is NOT a game for children despite having well-known fairy tale characters. This is clearly a completely different take on these characters, although if you read any of these stories as an adult some of them are a lot more sinister than one would notice as a kid. And the Fables comic book series, which this game is based on, highlights those elements in a gritty NYC setting and The Wolf Among Us captures that perfectly. The main character, Bigby, has a dark past that everyone tends to remember. To see his friend, Colin, who is also one of the 3 pigs, try to guilt Bigby into giving him his glass of bourbon because Bigby was responsible for blowing his house down in the past is a scene that has to be witnessed. This is the world that The Wolf Among Us is set in and it’s wonderfully twisted. There’s also extreme economic injustice with so many Fables living in poverty or just barely getting by and that’s even highlighted in the very first encounter with another character, Mr. Toad. Non-human characters have to buy a spell called a Glamour in order to conceal their true nature from those who aren’t Fables, and if they can’t afford this they have to live on a secluded farm, which is referred to as worse than a prison, in upstate New York. So part of the anger towards Bigby isn’t just because of his past but the view that he’s a tool of the system that doesn’t care about their everyday struggles and also harms them.

This is an excellent premise and backstory and works very well. However this is a game and the gameplay has to be on point for it to be truly enjoyable. If you played any of the Walking Dead episodes then you’ll feel right at home here. You control the character with the left stick, and you control the cursor on the screen with the right stick. You use the cursor to interact with other objects or people. When you move the cursor over an item or person you can interact with, it changes to show you the different ways you can interact and each action corresponds to one of the buttons on the joystick. You have an inventory that is displayed on the screen and you can scroll through the inventory using the d-pad, however there’s no way to select an item in your inventory and you can only use them in specific situations. Clearly the controls aren’t complicated but the game makes use of QTE’s, which can be a combination of moving in a certain direction or lining up the cursor and hitting one of the triggers,  in all action sequences. And the action sequences are pretty intense and brutal, but they’re very enjoyable. You’re not required to do all of the QTE’s successfully in the action sequences, however there are some that are fatal so obviously you would have to perform those combinations successfully.

Another aspect of gameplay is interacting with characters and making choices about how to respond, or where to go next. You’re given 4 answers (or questions) to select from and you don’t have all day to select because these are timed answers (or questions). Silence is a valid option so if you don’t respond in time that’s the default choice. If you read any of my Walking Dead reviews then you know that I feel that timed responses can add some excitement and when used properly can effectively add urgency in life or death situations where the outcome depends on your choice. But you would also know that I felt it can also be overused and actually make things more complicated unnecessarily.

That felt like the case here at times. Of course it’s realistic that you won’t have hours to respond to a question in a face to face conversation but when you play this game I urge you to make sure you won’t be interrupted, sneeze, use the bathroom, or be prepared to pause the game constantly. Ok I’m being somewhat facetious but there was a time when I looked away from the screen for less than 5 seconds to check my phone and I completely missed a response. And it was just a routine conversation but about 90% of the interactions are timed and some are very fast. This doesn’t take away from the overall experience too much and since the episode isn’t extremely long, you can replay the entire episode again. Responding the way you want is very important because it doesn’t just change the conversation, it changes outcomes, and it changes the makeup of Bigby and how he’s viewed as well. He is fighting his inner wolf and some residents of Fabletown are intent on treated him poorly because they haven’t witnessed that side of him. And this is also one of the beautiful things about Telltale’s games because everyone’s experience can truly be different based on the choices that are made. Characters can live or die based on these choices, and characters can trust you or mistrust you based on those same choices and effectively change your interactions with them or situations involving them. And the story is very engrossing, and full of conspiracy, tested loyalties, and the characters are very believable and intriguing. You have to investigate scenes and/or catch characters in lies to uncover the truth. You even have to choose who you suspect based on evidence you’ve acquired. And Bigby is an excellent protagonist and there are clear traces of mutual romantic interest between him and Snow White. And the conclusion to this episode is amazing and will definitely leave you anxious for the second episode. And as always, your choices are compared at the end of the game to the choices that other players made just like in the Walking Dead series.

The Wolf Among Us Episode 1: Faith is an excellent start to the series and with its graphical style mirroring the dark, moody tone of the story, it’s easy to become immersed in this tale. Within the first 5-10 minutes of playing this game you’ll get a taste of its mature atmosphere, intense action sequences and you’ll enjoy the ride all the way through. The choices you make aren’t just superficial but ultimately change the outcome of events, giving you control over the story and staying true to Telltale Games’ promises that you can decide if Bigby gives in to his wolf nature or stays true to the new leaf he turned over. And with the conclusion of this episode it’s very clear that things won’t let up throughout the series. I highly the Wolf Among Us Episode 1: Faith so you can experience its unforgettable story and characters