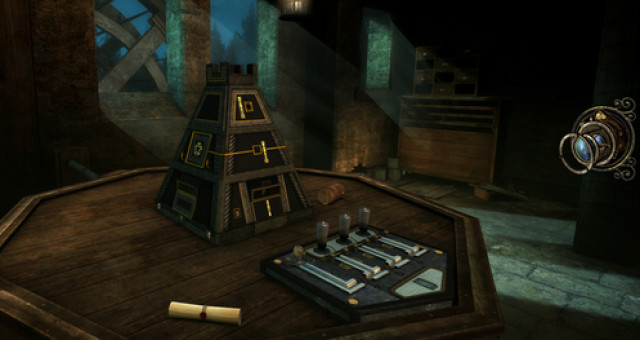 The Room Three is a narrative puzzle-solving game that places you in a mysterious location and challenges you to explore its creepy objects and rooms in search of a deep mystery. Like the two “The Room” games put out by Fireproof Games before this one, you essentially play the role of a vaguely defined scholar of sorts who’s being trusted by colleagues to delve into the mystery. Chasing mystical undiscovered elements, realizing impossible phenomena, and ultimately diving into new dimensions, your job is to follow, investigate, and hope everything turns out alright.

Frankly, Fireproof has always excelled with the gameplay in this series, to the point that The Room Three was a breath of fresh air for anyone who’d been waiting over a year since The Room Two. There just aren’t many mobile games out there for which simple navigation of a screen and manipulation of objects works so well on a touchscreen. At times the intuitive motions (swinging doors on their hinges, sliding pegs along slots, and turning keys) almost make the game feel like a sort of early form of virtual reality. It’s just that thoroughly interactive.

Parts of The Room Three involve looking around rooms trying to figure out which objects you’re supposed to zero in on as you look to “solve” the rooms and progress to new ones. However, the strength of the game, as was the case with its predecessors, is in the chance to break into little boxes, models, chests, etc. In this regard, The Room Three is a rare instance of a near-flawless safe-cracking game.

This is a pretty rare commodity in any and all gaming markets. Gala Bingo’s site, while best known for an array of online bingo rooms, actually has one of the rare examples of a game centered on safe-cracking. It’s a slot reel at heart, as opposed to a bingo room, but it takes you through an intriguing setup in which you pick a safety deposit box at a bank and set about “cracking” it as you spin the slot reel. Elsewhere, mobile games like Safe Krackers and Pop The Lock deal lightly with solving safes and locks, but don’t provide anything like the atmosphere you get in The Room Three, or frankly even the slot game.

This is what’s at the core of the fun you have playing The Room Three. It’s simply a blast not just to crack open a few boxes but to be faced over and over again with new, complex designs. There are similar elements at play throughout, but only to the extent that you get a feel for what to look for, and what tricks to try. Beyond that, each puzzle you have to solve is entirely unique, and each one has a heightened significance as you progress through the plot – vague as it may be.

The Room Three is not just a worthy sequel to Fireproof’s dynamite mobile series, but the best of the three games thus far. It’s remarkable, really, that the haunted atmospheres, creepy soundtrack, and array of puzzles all feel as fresh as they do after two satisfying games. But the improvement is so clear that one has to wonder if Fireproof will just keep getting better with this series. The frustrating thing is that the story behind it all is still not fleshed out. The end of The Room Two appeared to promise answers, and yet The Room Three still doesn’t really explain why you’re chasing mystical dimensions and following handwritten notes into dangerous fantasy rooms. It doesn’t ultimately matter too much, but it would be nice to see a plot actually develop in future versions. Nevertheless, this is an incredibly impressive mobile game. I recommend playing on an iPad, if you have one, with headphones in and the lights off!