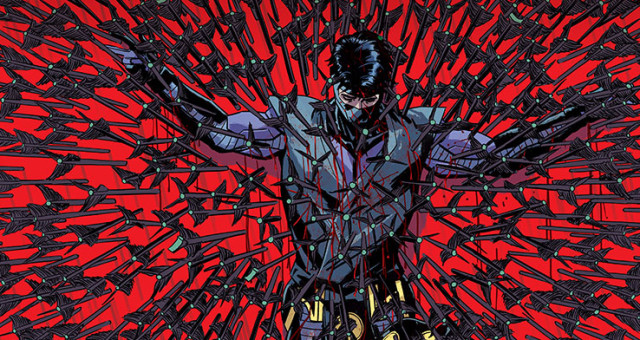 The Book of Death: Fall of Ninjak

Book of Death: The Fall of Ninjak chronicles the final mission of Colin King, the Unity member known as Ninjak. It opens up 100 years in the future in Leeds, England with Ninjak meditating in what remains of his castle. All of it was destroyed except the bunker during the Second Armor Hunters War when the invaders deployed dark-matter nukes in the hometowns of all Unity members. A lot of Earth’s defenders were wiped out during that war before the Armor Hunters left but he’s been able to prolong his life through the use of his mind and meditation. But he’s not alone for long when he’s attacked by a swarm of positrons, electronic insects but he’s still able to destroy them all as he shows he’s capable of extraordinary physical feats even in his old age. However, he sees an old face enter his castle, and it’s Livewire, who looks the exact same as she did 100 years ago and she controls the Positrons. She apologizes for them attacking since she apparently just came to talk to Ninjak. But what has happened over all these years that changed Ninjak and Livewire, and what was the fate of the rest of Unity? And what is so important for Livewire to communicate to Ninjak with an army of Positrons?

I wasn’t really feeling the Book of Death: The Fall of Bloodshot issue as it felt completely detached of a larger context and as a result felt flat. The Fall of Ninjak corrected just about everything that was wrong with that issue and delivered a riveting tale connecting so many vital events together. And if you’re a fan of the excellent Rai series this issue you’ll love this issue. From the moment a second Armor Hunters war was mentioned at the beginning of this issue I was tuned in completely, and it was a great way to start the issue. It immediately gave a clear context to the current rubble Ninjak was meditating in and his current physical condition with one of his arms being only bone. So even without knowing all the details of the previous 100 years it was still possible with the information given to have a good understanding of what occurred. And Ninjak’s thoughts and meditation were interesting and reflected not only the well-known character but the growth over these last decades. And I was shocked to see Livewire behind the Positrons and the fact that she looked exactly the same. Their exchange was very informative as Livewire relayed to Ninjak the war that occurred in Japan involving Silk against the Fitzys and how half of Japan was destroyed in a terrible display of power. So Livewire wanted Ninjak to help with an idea she came up with Harada to rebuild Japan. I won’t give anything else away but what would unfold next and the revelations in this plan were amazing, and I admit that as a Rai fan this was the best possible backstory to that series. Even if you aren’t familiar with Rai this was still an intense issue with plenty of action and story progression. Every page was enjoyable and the appearances made by other characters were done extremely well. And as of now, the Book of Death: Fall of Ninjak has set the bar high for the remaining Book of Death issues.

The Book of Death: Fall of Ninjak is an engrossing issue that sets the stage early on allowing the events that follow to remain clear and enjoyable. The way Ninjak’s current condition and character development is displayed here fits the character perfectly, and this last mission is throughly entertaining. But what makes this issue top-notch is the way it touches on past events in a meaningful way while laying the groundwork for the known future in an intense way. I highly recommend this issue.