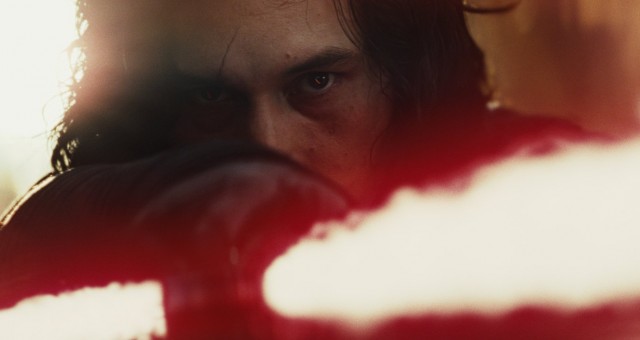 Star Wars: The Last Jedi opens up with the Resistance scrambling to escape their base after receiving a warning of an imminent attack by the First Order. After the rebels destroyed Starkiller base in Episode VII, the First Order seeks swift retribution. Unable to match the Order’s sheer firepower, the Rebels’ plan is to escape with Poe Dameron providing a distraction. The plan is successful but comes with a steep price. And unknown to the Rebels, the First Order can track their ships through hyperspace.

Meanwhile, Rey hands Luke his lightsaber and makes an appeal for him to help the Resistance. Luke throws the lightsaber over his shoulder and refuses to train Rey. Even when he learns that Han Solo was killed, Luke decides to do nothing. His failure with Kylo Ren and the events surrounding that has led him to believe it’s best he doesn’t get involved. And more than that, he believes it’s time for the Jedi to end. Can Rey convince Luke to come back and help the cause? Or are there things about the Jedi even she can’t understand? 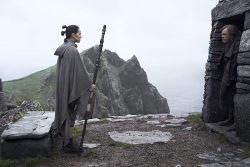 Like so many others, my excitement for The Last Jedi increased exponentially as the release date got closer. I’ve spent countless hours the past two years delving into various theories in general Star Wars fan fiction but I didn’t do that with expectation those theories would pan out as I hate spoilers. I did it solely for extra entertainment. I’m glad I didn’t have the expectation that those fan theories would pan out because TLJ was bold enough to move the story in an exciting direction. There were moments I genuinely loved in the movie. I thoroughly enjoyed it, especially in second half. I would like to watch it multiple times to see things I missed previously. Yet when I left the theater I couldn’t figure out why I wasn’t in love with the film in its entirety. And seeing how divisive and varied the response has been to this movie, scouring the internet for things I might’ve missed didn’t help. I found myself disagreeing in many ways with the various viewpoints. But I think now, I understand why.

I believe that when you go see a great movie you should feel immersed in it. It pulls you in it in some capacity whether it’s through its action, suspense, drama, etc. It should be an experience that is complete while you’re watching it. Unless the movie is part of a trilogy or a series where some prior knowledge is necessary, of course, you should leave feeling that way even if you want more. The problem with TLJ is not that it breaks from the prior movie or isn’t true to the series, it’s that it spends most of its time treating the mysteries introduced in the last movie as if they mattered. And as a result, so much potential in the story and the characters was squandered. 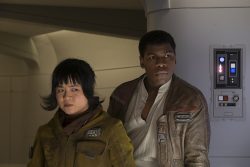 The film started out great with exciting sequences like when Rey found Luke early. Luke was entertaining, and it felt so good to see Leia on-screen. Yet just like the longest and slowest space chase would occur, none of the plot points moved forward in any meaningful way. Rey’s communication with Kylo was interesting but it teased the usual theme of one choosing the light or dark side. The character arcs didn’t unfold here, instead they dragged.

Refusing to elaborate on how Luke was deceived by this Snoke wasn’t bold enough. It was a missed opportunity to bring the story together show Snoke as a true villain. There was no background given about the emperor in the original trilogy but it wasn’t needed because by extension, the empire represented all that was the emperor. Luke felt more like a Yoda clone instead of anything the character became in episodes 4-6. This was enjoyable because of Mark Hamill’s performance. However, Luke in the final 3rd of the movie was awesome.

Finn was sent with a new character named Rose on a mission that felt disjointed and ultimately unnecessary. They were aided by Poe, who consistently escalated a situation from 0 to 100 real quick. There was an opportunity to touch on war profiteering that could lead to understanding the conflict in a fresh way. However, the sequence of events not only felt random but were actually random. The only saving grace to me was the fact that the actors brought a lot of charisma to their roles.

The delay in the reveals made this feel like it was at least two separate movies. One that had unengaging story threads in the first half, and one that was exciting, filled with potential and captivating in the second half. I could enjoy the new characters in ways I hoped after seeing the first one. I was ecstatic about Rey and Kylo’s decisions because of how it could keep things fresh going forward. Also, I appreciated Finn’s situation because there was more character growth, and it was much better than the dragging side quests he was in prior to this.

It wasn’t until later that I understood that what bothered me wasn’t the reveal about Rey’s parents. I legitimately liked that. It’s that this should’ve been explored this episode to give more depth to her character because she’s a good character. I know there’s another movie but then her arc is similar to the original trilogy where the parents are revealed in the second movie. The same could be said about the potential Rey/Finn relationship. This episode reeked of timidity, and as a result Finn was relegated to an unnecessary side quest most of the movie instead of any involvement with Rey.

Unfortunately, as far this review goes, the majority of the parts I loved I won’t write about unless I give away the entire movie. I literally went to the theater after flying for 24 hours so that factored into my first viewing. I didn’t expect the movie to revolve around Luke and Snoke but I was disappointed in the way that dynamic is addressed. So I’ll say that my stance is that when the Last Jedi boldly went where no Star Wars…no, wait. Let me rephrase that. There’s so much to explore in the Star Wars universe. It is possible to embrace familiar themes but explore them in bold new ways. The Last Jedi is more successful when it does that.