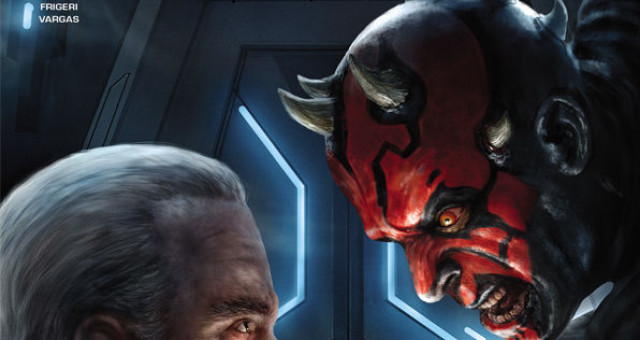 Star Wars Darth Maul: Son Of Dathomir #3 has Darth Sidious re-examining his plans based on the recent capture of Count Dooku and General Grievous by Darth Maul and his forces. Using his position as the Supreme Chancellor he calls on the Jedi and informs them that reports have surfaced describing a battle between Count Dooku and a red-skinned Sith, and suggest to Mace Windu that it could be Darth Maul, the Sith they’ve been trying to capture. Certain it is Darth Maul, Mace organizes the Jedi and other soldiers to search the area, and the items they find only confirms that belief and also sheds light on the Mandalorians helping them. Meanwhile, Darth Maul attempts to negotiate with Sidious and use Dooku and Grievous as bargaining chips, and if his demands aren’t met he’ll kill them. Unfazed by his demands, Sidious cuts off communication and instead of killing them Darth Maul offers Dooku a deal. He states that since it’s only a matter of time before Sidious betrays him the same way he’s betrayed everyone else, Dooku would be better off joining forces with him and Mother Talzin, and together they could defeat Sidious. But with the Jedi hot on their trail now Sidious might end up being the least of their concerns. 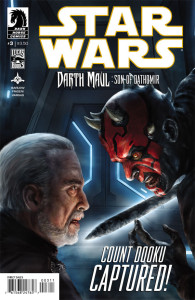 This series has been an enjoyable ride even if the plot has seemed simplistic at times. But considering the relatively fast pace of the story developments and a reliance on previous events in the Clone Wars animated series it hasn’t taken away from the enjoyment too much. And that’s a necessary reminder because the start of this issue when Darth Maul does everything in his power to capture Count Dooku and General Grievous only to keep the latter prisoner would be more frustrating without the context of the show (and the audience). However the plot does become a little more complex with the Jedi being introduced to the mix, and whether or not that was part of Sidious’s original plan remains to be seen. It does make things slightly more intriguing. Where as the first 2 issues felt like Darth Maul’s solo run and could possibly appeal to those who were just his fans but not particularly fond of the prequels, this issue feels like an episode of the Clone Wars the most. If that’s good or bad that depends on your preference but numerous Jedi make an appearance including Obi-Wan. I enjoyed the action for the most part but I personally prefer to see Darth Maul in action rather than Count Dooku. However for me, just like the animated series, it couldn’t completely shake the air of inevitability that prevented me from feeling fully engrossed in events as it removed any suspense from the action. And unless someone like Count Dooku is one of your favorite characters these action sequences can just feel like going through the motions.  So it’s a good thing the story has been entertaining in its own way.

Star Wars Darth Maul: Son Of Dathomir #3 is an entertaining issue in the context of the series, and the inclusion of the Jedi makes the story slightly more complex and that works if it’s connected to Sidious’s original plan. However the focus on Count Dooku when the action started took away from the sequence for me as the matter was already decided before even started. Still, this series is enjoyable for what it is and since the plot has become more complex with the Jedi the potential story developments become more intriguing.