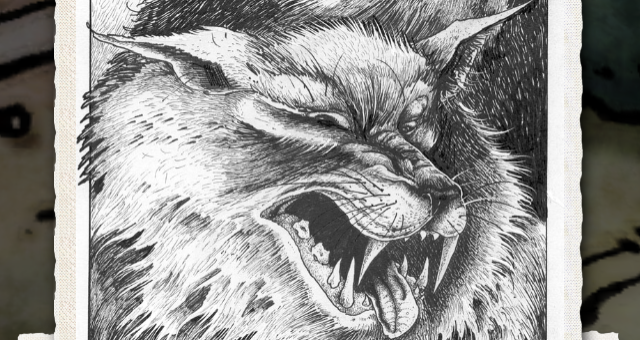 Sorcery! is a fantasy storybook adventure game developed by Inkle and based on the adventure gamebook series written by Steve Jackson. This is the 1st of 4 parts set in a world of magical beasts, fierce warriors and of course, sorcery. You play the role of a new hero who has to set out to recover the Crown of Kings, which bestows unmatched magical powers on the one who wears it. It was stolen by an Archmage violating the transfer of ownership and becoming a threat to the entire land. You have a dream that you survived all the challenges in the wilds of Kakhabad, Khare, the Baklands, and made it deep into Mampang until you’re standing in front of the Crown. But the threat isn’t over as the looming war is very near and only one with the power of the Crown can prevent it. However you feel triumphant until you rush forward, realize it’s a trap, and wake from your dream remembering you haven’t even taken one foot outside of the settlement outpost you’re stationed. But that’s no reason to despair because as the legend goes, the Crown was originally found by a lowly foot-soldier who as a result became Emperor of the Eastern World. Will that be your destiny too, or will the Shamutanti Hills, the first part of your journey, prove to be too dangerous for you?

If you’ve ever read one of those choose your own adventure books, or you’re familiar with the Sorcery! book series from the 80s then you’ll feel right at home here. The premise behind those books, and also this game, is that you’re presented with a situation and the option you choose directly affects the next sequence of events. In book form it could be turn to page 49 if you want to go left, for example. Well that’s what Sorcery! is but in video game form. 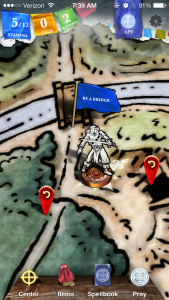 Even though it is a video game, the story is told primarily though text. However that shouldn’t be discouraging because there’s definitely more to this game then just reading text and making choices from that. You select either a male or female avatar and the layout and graphics are very similar to a board game. To move from one location to the next you touch and drag your avatar to one of the defined locations on the map. When you start the game, the tutorial pretty much spans the entire time in the settlement outpost and there isn’t much choice on where you can go. You can zoom in and out of the map using the pinch method to try to have a better idea on your surroundings, although you can only see information about locations you’ve already visited. However you can always undo a choice and go back to a previous location to do over, and that’s represented by the red checkpoints in the above photo.

The combat system in this game is stamina based for both physical attacks and spells. And your stamina does increase as you progress in the game so you’ll be capable of doing more the further you get. The tutorial is very clear about how combat works, and outside of the tutorial you’ll be given a choice of whether or not you want to cast a spell first. When combat does start you’re taken to a separate screen showing your avatar and the person/monster you’re facing off against. At the top is the stamina for each character, which represents health, and there’s an attack meter behind each character, which you have to use strategically to win the battle. There are two basic stances: attack and defend. To defend you just slide your character all the way to the left and regardless of your opponent’s attack you will only lose 1 stamina. To attack you slide your character to the right and your attack power is based on how far you slide your character to the right and then hit attack. So to use a strong attack you slide your character all the way to the right, and to do a medium attack you would only slide half way. If your enemy is attacking at the same time, whoever attacked with more power damages the enemy based on the strength of the attack. 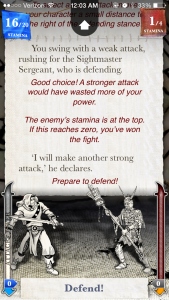 The strategy comes into play because your maximum attack power for a particular swing decreases for each swing unless you defend to recover some of it. The tutorial spells out attacks but once you leave the outpost there are cues you can pick up in the wording as well as being able to see the maximum power your opponent can use on any given attack. If you use your maximum attack and your opponent defends, you just wasted your attack power and will have less for the next attack. It took a couple of regular battles to get the hang of this fully but it’s actually very enjoyable. Some of the early battles take a hit or two to win but the later battles shine a lot more.

If you don’t want to duel an opponent with your sword you can always cast a spell before the battle and defeat the person/monster that way. When you decide to cast a spell the game zooms towards the sky and you have to select three floating letters to form a spell. Even though you have a spellbook, a little memorization is required when it’s time to cast an actual spell. But it’s not as tough as it might initially sound because the letters are narrowed down based on your selections so no matter what you’ll always end up choosing a real spell. Whether or not you meet the requirements to cast that spell is another matter. Your actions and the company you keep can impact your ability to cast spells and the letters available to you at any given time. There are situations where you can cast spells without a battle getting ready to take place and that could be to influence animals, unlock doors, create walls or various other actions. Exciting might not seem like the correct word to use in a game that has a lot of text but when you take a wrong turn and have to figure out how to escape from a room filling up with water extremely quickly and you only get one action to do so, and you survive, then you’ll understand why I would use that word.

Sorcery! is not without some warts. The story is engrossing and the choices are real and range from sparing someone’s life to avoiding villages altogether. That can truly change your adventure and there’s a lot of replayability value here. I also understand that it’s the 1st of 4 parts so it wouldn’t be incredibly long by itself, but unless you’re belligerent in every village you go or with every person you encounter, you won’t engage in that many fights throughout, and the combat is something that I did enjoy. In one playthrough I can only recall 2 fights that took more than one or two hits, and that path was based on the choices I preferred. The inventory system is limited and there’s no way to sell duplicate weapons you acquire to at least earn more gold or use to purchase rations, which is needed to replenish your stamina. There’s an option to prayer to your spirit creature for a miracle that requires a period of time to pass before you can do that again but it would have been nice to be able to prepare for the journey as well. These things don’t put a black cloud over the entire experience at all and I’m anxious to playing part 2 and seeing how my choices will carry over using the code generated at the end.

Sorcery! is a very enjoyable fantasy storybook adventure game and if you ever enjoyed those choose your own adventure books then you’ll love Sorcery! It felt brief but that was mostly because of how much I was enjoying it and the high replayability value is something that makes it worth playing again just to see the results of other choices. The combat system and spells work seamlessly and I found the story to be engrossing. I highly recommend Sorcery! for its ability to bring to life a classic series and make it feel fresh.