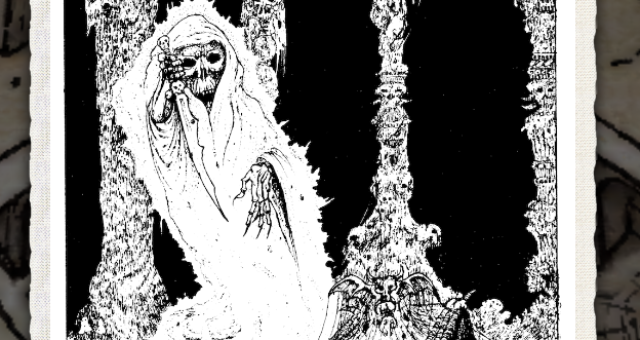 Sorcery! Pt 2 is a fantasy storybook adventure game developed by Inkle and based on the adventure gamebook series written by Steve Jackson. It continues the journey to retrieve the Crown of Kings from pt 1 with our hero heading towards the city of Khare. But this city is unlike any other and this goes back to when it was originally founded. It was founded next to the Jabaji River as a camp for pirates who ambushed unsuspecting merchants sailing nearby. Over time it grew as it attracted more thieves and other unsavory types until it became a full-fledged city complete with a Council of villains. So it became a cesspool of treachery and traps, and if you could you would avoid it at all costs, however the walls built around this city makes it the only entrance to the Baklands and continuing your journey. And just like the city, the walls are treacherous and weren’t necessarily designed to keep people out but to keep people trapped inside. So getting inside the city isn’t the tricky part. Escaping the city through the North gate is impossible without the lines of the spell put on it to prevent anyone from ever leaving. And no one knows the spell lines except the nobles on the original council. The fact that not all of them are still alive is one of the least of your concerns as there are plenty of creatures and other villains who want to make short work of you way before you get to the North Gate. Can you not only survive this treacherous city but acquire the necessary spell lines to escape or will you succumb to the worst it has to offer? 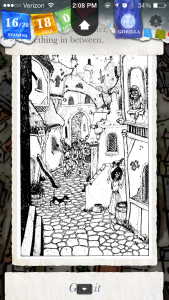 If you played Sorcery! Pt 1 then you already know that its game play is unlike any other game out there. It’s a highly interactive video game where you are required to make numerous decisions that directly impact what occurs next in the story. The story is told primarily through text and visually it’s very similar to a tabletop RPG. So you have control not just over big decisions affecting the story but even minor details affecting every single interaction. So one player’s experience will be very different from another player’s experience. If you played part 1 you can either put in the code that you were given at the end, and part 2 continues with those choices or you can start a new game. Either way you start off heading towards Khare. The controls are the same so you move your character by touching and dragging to your next location on the map. You can still zoom in and out on the map so you can get a vague idea of what lies ahead. The first person you encounter is a beggar/soldier and your choices when interacting with him can change how you get into Khare. And if you respond to him with force then you’ll get your first taste of action in this part, if not then you’ll have to wait a little later for that. It’s still basically a blind batting system but the cues on when to block or attack are clearer and I enjoyed the combat in the first part. There seemed to be one or two more battles this time around and I could appreciate that. There are some new game play elements since the goal in this part is to escape from Khare. You have to collect clues to get information about the 4 spell lines required to open the North Gate and every clue you collect is stored in your journal as hints. You collect clues by interacting with the inhabitants of the city and one way to interact with them is through the game Swindlestones. 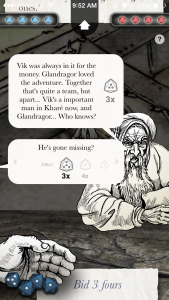 Of course the biggest game play element is the interactive storytelling and this time around there are A LOT more choices you have to make. One good thing is there are also a lot less locations on the map where you just have to move in order to just move once again without doing anything there. So the map overall is much better and you have to pay attention to where you go in order to collect all the clues. 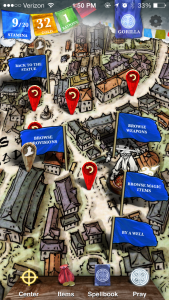 And Khare is a well-developed city with the different sections being distinct not only in their appearance but in the type of characters you encounter. This is a city that’s alive and bustling with commerce in certain sections. (There’s even a marketplace, and of course you can play Swindlestones in order to acquire more gold to purchase any item you want.) This helps out a lot because the story will require you to revisit many parts of it and it would only be frustrating if the city had nothing to it. This does however reveal an issue with moving around on the map. Just like in the first part you can rewind to any previous decision you made by selecting one of the red icons on the map but there were some parts of the city where you couldn’t travel back even if you wanted to go back to the marketplace, for example. You would have to rewind all your other actions or continue to move along even if what you were missing wouldn’t be known as important until later. And if you don’t play for a day or so it’s easy to forget some of the smaller details that would help you remember where to look for certain clues. So it’s not fun getting “lost” when you can’t retrace your steps in certain parts without rewinding. It was close to feeling overwhelming at having to repeat so many choices. And I don’t give spoilers in my reviews but I will say that this was highlighted even more with a big choice towards the end if you don’t find all the spell lines. There is a nice reveal in the story that makes the quest feel like an epic quest worthy of one searching for the Crown of Kings depending on your choices.(Rewinding actions does allow you to see different results and this came in handy at one point where you could try to make a new spell while staring at the stars. I got some very interesting results so it does have its benefits.) 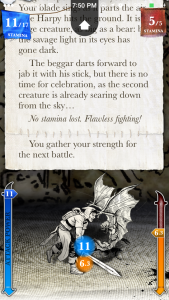 Sorcery! Pt 2 is an enjoyable sequel to Sorcery! Pt 1 and improves on some of the game play mechanics of the first one. The city of Khare is true to its reputation of being treacherous and dangerous, and the addition of Swindlestones is an interesting take on interacting with inhabitants of the city as well as being fun in and of itself. The story is more engrossing and it helps that the backstory of the city and its nobles is interesting considering how many times you might have to revisit areas or scenes. The choices given in this part were of a better quality and was borderline overwhelming when having to repeat them often. But this is still a fascinating format, story, combat and sorcery system, and I’m looking forward to seeing what will unfold in the Baklands in Part 3. I definitely recommend playing the Sorcery series.