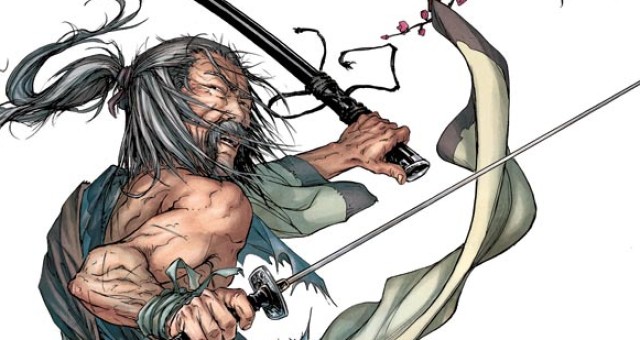 Samurai #4 has the inhabitants of the Isle with No Name finally receive some hope from the most unlikely of places. It opens up with the princess meeting with the island’s doctor so she could give him something she concocted. She’s had time to study the inhabitants of the island and she saw how so many innocents were dying from the illness that’s affected the island for centuries. She gives the doctor a cure she created and she wants him to test it on the worst patients but to also keep it a secret so Nobunaga doesn’t find out. She wants Nobunaga to die a horrible death not just from what he’s done to her but also to the inhabitants. Meanwhile the Yakuza gather up all their belongings so they can depart the island. However, they turn on Nobunaga and kill him and anyone who touched him before they leave. They hated what Nobunaga did but also feared being infected by the same illness. News of Nobunaga’s death spreads by the morning but Shobei still intends on going forward with his duel with Takeo. He challenges Takeo to a fight to the death at another location. What is Shobei’s true goal, and will this derail Takeo’s search for answers regarding his family? 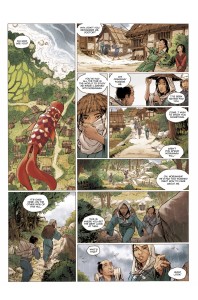 It would be an understatement to say that there’s been some anticipation for the duel between Takeo and Shobei throughout this series. Thankfully the focus was also on engrossing character development and world building because if it was all about the duel then some of the wind would’ve been taken out the sails at the end of last issue with Nobunaga planning on leaving. And since the duel wasn’t the featured event in this issue it would’ve been a huge disappointment. Instead, the character development and world building paid off handsomely with the events that unfolded here. There were satisfying conclusions to the various story threads as well as an intriguing start to the next ones.

The illness plaguing the villagers surprisingly became the biggest factor in the events on the Isle with No Name due to Nobunaga becoming infected. However, the impact on the villagers was well-documented prior to this, especially with Yoshida and his wife’s story. The daily struggle due to this was as big a robber of their lives as the Yakuza demanding payments. So it was good to see Terumi, the princess, play an important role in this. The way her character evolved from being Nobunaga’s captive to one bringing hope to the entire isle while bringing down the Yakuza’s hold in the area was more than just sweet revenge on her part but her character developing into so much more than that.

The duel between Shobei and Takeo would still go forward since Shobei would challenge Takeo, and the latter’s honor as a samurai would compel him to accept. It was clear from the start that Shobei wasn’t in alignment with the Yakuza’s behavior and what mattered to him most was being able to join his family. Masato, Shobei’s student, would be the only one on the island not rooting for Takeo, for obvious reasons. The beauty of Frederic Genet’s artwork would come into play here more than ever with many wordless panels conveying the elevated senses between the two warriors as well as the anxiety in the crowd. And the fluid and decisive movements captured the mastery in their skills while simultaneously showing how it was too quick for the crowd to determine what initially happened. And the conclusion was an inevitable considering how it was built up throughout the series.

And as quickly as events came to an end on the island, a new beginning would occur for Takeo, and I was looking forward to this the most. Despite numerous questions still remaining there were a couple of questions answered, and the biggest one regarding his brother was answered wonderfully. At one point in the series I felt it was progressing slowly but the intriguing threads left here as well as the big development, I’m hooked again to the mystery of Takeo’s family.

Samurai #4 is an impressive conclusion to the series with its satisfying handling of its many story threads. Temuri’s evolution from a captive to finding her place on the island is just indicative of the thoughtfulness put into the character development for all the characters. The duel between Takeo and Shobei lost some of the suspense with the Yakuza leaving but is still impactful due to the effects on the villagers and Takeo. And with the big development at the end I can’t wait for the next series.