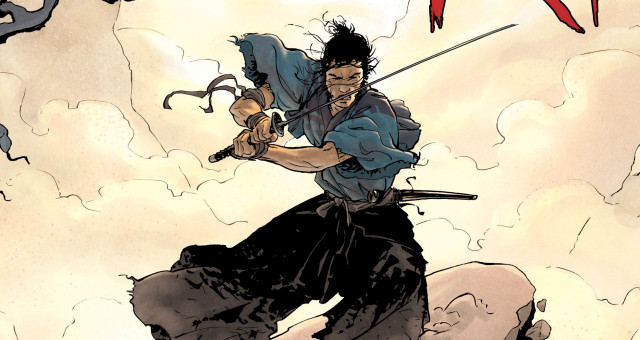 Samurai #2 puts Takeo in a difficult decision when choosing to help the villagers at the potential cost of jeopardizing his brother’s life. When he ventured to the Isle With No Name he didn’t expect to arrive in the midst of so much activity, namely the Yakuza’s annual fight against the villagers. This issue opens up with the men Takeo beat reporting back to Nobunaga about what transpired including Shobei stepping in on Takeo’s side. Nobunaga promises to deal with Shobei after he outlives his usefulness. He is currently more interested in taking advantage of a young girl being held hostage as a result of the peace agreement made with her clan to stop the war with them. Meanwhile the villagers  understand the dire situation they face and hearing about Takeo’s actions in the shop they wonder if they’ll be able to recruit him to fight as their champion. However, Monk leads Takeo out of the village and shows him Akio, Takeo’s brother, hiding out in a cave. Monk knew Akio’s location all along. But can Takeo risk exposing his brother’s location and any family secrets in order to become the champion of the village?

It’s such a good feeling when you start a new series and you feel so connected to the world that resides in it after just one issue because of how riveting it was. Such was the case with Samurai #1. Part of me wanted to see a bit more of the villagers in order to get a better context of the tournament while another part of me wondered how much could be covered in 3 issues. Somehow this issue addressed both of those concerns without feeling overcrowded. And the way Takeo entered the tournament, which would seemingly pit him against Shobei, was even better than I hoped it would be so it didn’t feel cliché, and it created even more potential for next issue. And this all started due to Akio being introduced early so the story progression throughout was wonderful.

The opening sequence showing the Yakuza reporting back to Nobunaga was impressive not just because the thugs Takeo handled were misrepresenting the facts and as a result put Shobei in the crosshairs but because of what it would reveal about Nobunaga. His ruthlessness in abusing that young girl coupled with the fact that he had at best a tenuous peace with another clan made him more vile while creating a more complicated situation and backstory to his character and the Yakuza’s activities. And I liked how Nobunaga viewing Shobei as one who needed to be dealt with in time because it meant the two of them weren’t aligned and Shobei’s involvement in this story could possibly extend beyond his limited involvement in the tournament. 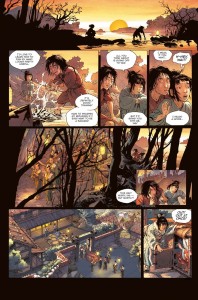 The lives of the villagers would be detailed more here in terms of the impact of the tournament on them and their hardships in general. Since word would spread quickly of Takeo’s actions the villagers would want him to become their champion even though only a handful knew that the money was spent on an ill-conceived plan to attack Shobei ahead of time. And since the Yakuza was still abusing villagers Takeo would be confronted with a choice to intervene in another scuffle. He would decline to get involved and this would result in him receiving a tongue lashing from an elderly woman. The villagers would then turn to Yoshida, the former samurai whose wife was dying of the mysterious illness plaguing the village. This was a touching sequence and really captured the plight of the villagers, who pretty much just wanted to live their lives peacefully.

All of this would shake Takeo to his core making him question his decision in light of the Samurai Code he should be following as opposed to personal gain. Monk keeping Akio in a cave but stating he wasn’t sure he could trust Takeo deepened the mystery behind their family history. It was slightly disappointing that no answers were given about the scroll Takeo had on him but I know answers will be given in time and I appreciated the flow of the story. It’s a testament to how much I’m now looking forward to every issue. And Akio’s injury that left him incapacitated added another wrinkle to the story. I don’t want to give away any spoilers so I’ll say that with all the character development, battle preparations and mysteries on the verge of being solved, next issue is set up to be an incredible one.

Samurai #2 is a terrific issue that makes every aspect of this story more engrossing whether it’s the lives of the villagers, the Yakuza’s activities, or the truth of Takeo’s family history. Akio’s introduction early this issue is a great touch allowing the story to progress without anything feeling like filler because of confidence that important issues will be addressed. There isn’t much action aside from Takeo and Shobei’s preparation for the upcoming tournament but the character development is so strong and entertaining that it makes the anticipation for the action even greater. I don’t know how events will unfold next issue but I’m so glad I started this series because now I’m hooked.