Samurai #1 is the first issue in a 2-part series written by Jean-Francois Di Giorgio and published by Titan Comics about an extremely talented samurai named Takeo who possesses a sword that once drawn cannot be sheathed until blood is spilled. It continues where the Marvel series left off with Takeo traveling to the Isle with No Name in order to search for his long-lost brother and the truth about his family. He’s not the only one interested in this island as a Yakuza horde descends on it once a year to collect tithes from the local villagers who have no choice but to pay since they’ve been unable to find a champion capable of defeating whoever the Yakuza hire. And this year the Yakuza has hired Shobei, a peerless samurai capable of taking out multiple fighters without breaking a sweat, such as he did to the ones a villager hired in secret to ambush him. As a result, the villagers don’t have the tithes to give to the Yakuza so their only hope is to find a champion capable of winning for them. And if that wasn’t enough there’s a mysterious illness that only affects the locals and is incurable. Their only hope is in Takeo, who hasn’t had any luck in finding his brother or meeting anyone who could help him in this quest. But what will it take for Takeo to help the locals in their fight, and will he ever get closer to his true identity? 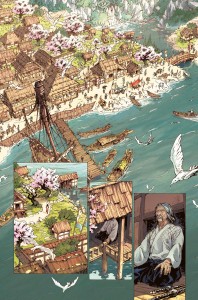 When I received the email about a new series called Samurai, and I read the synopsis, I knew I had to check it out. I learned that the original Samurai series was published in French in 2005 by Soleil Productions and then translated into English and published by Marvel in 2009. The Marvel series covered volumes 1-4, which consisted of Takeo becoming a samurai and ultimately going against General Akuma, who planned to overtake the Empire. After defeating Akuma and being saved by a mysterious tattoo, Takeo decided to continue his journey to discover his true identity and family history. You shouldn’t worry if you haven’t read the previous volume published by Marvel, and to use a clichéd phrase, because this is the perfect jumping on point. And this is coming from one who wasn’t familiar with the previous series.

One of the beautiful things about martial arts films is the unique way a story can be told through movement. The start of this issue captured that unique quality perfectly with a sequence that only contained about 6 words and spanned 4 pages. However, the detailed artwork made it possible to follow every single move made by Shobei taking out his attackers in a sweet display of skill. I found myself completely engrossed in not only this issue but the world these pages created. And as a martial arts fan I felt at home, and gained so much information about the characters involved even if I didn’t know the entire story at this point. And Takeo’s introduction wasn’t initially as action-packed but just as captivating. And he would be involved in plenty of action later so that was fine. 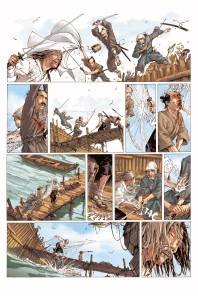 The interaction between Takeo and Shobei this issue was impressive in the sense that it wasn’t some generic rivalry between two skilled swordsmen. This was the result of the engrossing character development that explained Shobei’s background through Monk’s story. And also knowing why Takei was on the island created a situation where both fighters could have a personal stake in the outcome of their eventual battle that would be bigger to them than the tournament. This created so much potential in the eventual fight and outcome even though they weren’t pitted against each other this issue.

Overall I liked the way the islanders were portrayed, giving life to the Isle with No Name. This started with the elderly couple in love but the wife affected by the mysterious illness. In one fell swoop the beauty of the island and the simple life of the locals were conveyed as well as the external hardships they faced attempting to rob them of that life. Just one example of how captivating this tale was throughout when showing the life and hardships of the locals. Although I did have a slight issue with the way the villager’s tithes was used so carelessly to hire horrible fighters but it did make the situation feel more dire and a need for Takeo to ultimately step in next issue.

Samurai #1 is an excellent start to the series creating an immersive world with its setup of characters, the exploration of the island and the everyday lives of the inhabitants, and intense action. From the opening sequence to the final page the story is engrossing, and even with all the details in this issue it never feels sluggish. There isn’t much progress in terms of Takeo understanding more about his true identity, and since this is only 2 parts I wonder how much will ultimately be covered here. However, after my first taste of the world of Samurai I’m anxiously awaiting the next issue.