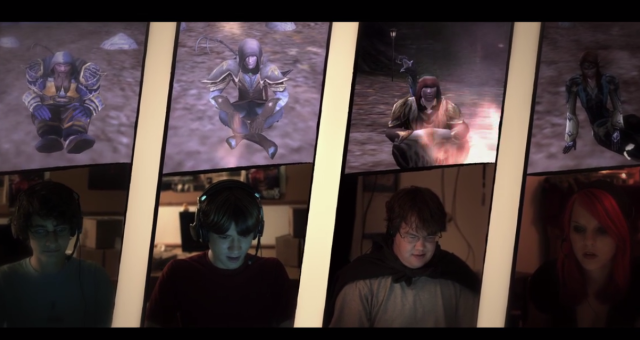 Rise of the Fellowship

Rise of the Fellowship is an independent comedy directed by Ron Newcomb about four Lord of the Rings Online gamers, Randall, Squirrelly, Nate, and Stacey, going about their daily lives and dealing with the usual high school angst. For one, Randall, escaping from it means daydreaming about one of the cheerleaders as Arwen and he’s Aragorn recreating some of their love scenes. He’s not very good at keeping that hidden as his friends try to wake him from his daydream because he’s staring at her when she’s with her boyfriend Joe. And so Joe and his friends come over and start messing with Randall for staring at her…well actually they enjoy messing with Randall, Squirrelly and Nate for any reason so this is no different. It appears to be a classic case of jocks versus nerds. After tangling with the bullies, the three friends end up at Randall’s job and his boss gives him news to post on the bulletin board that has them all galvanized, including Stacey who works there as well. If there’s one thing they all share it’s their love for Lord of the Rings Online where they’re known as the Radagast Rangers, and the post announces the upcoming tournament in Orlando, Florida and of course they want to enter. All they have to do is win the local tournament to win an all expenses paid trip to Orlando but there are a couple of problems. The first problem is that the group of jocks who enjoy tormenting the four friends are also LOTRO gamers and Randall’s boss prefers them and hope they win the local tournament. The second problem, which is clearly a much bigger problem, is Randall gets expelled from school because weed is found in his locker and was planted by someone else. As a result he can’t play in the local tournament and the Radagast Rangers end up losing due to being shorthanded. All appears to be lost until Randall receives a flash drive from an anonymous source containing a picture of Joe planting the weed. Can the four friends remain true to each other during the long journey to Orlando while protecting this flash drive in order to claim their rightful place in the tournament? Whatever the outcome is ultimately, one thing is certain: Their lives won’t ever be the same again.

As a big LOTR fan as well as a regular LOTRO player, the premise of this movie was very appealing to me. It’s very common for me to make a LOTR reference in regular situations and at times it’s harder for me to not make a reference than it is to make one since I have all the movies memorized. So I was very curious as to how the LOTR series would influence the events in this movie and how this movie would relate its events to the LOTR series. When it opened up with Randall and the cheerleader talking English with Elvish subtitles my hopes were raised slightly because satire that shows an understanding of the material and can be specific about things are usually much funnier than just general observations. My initial impression of 3 of the friends encountering the jocks was the feeling of a cliché but I liked the fact that the jocks turned out to be gamers too. That meant that this movie could fully dive into its material and unapologetically be a movie about gamers and gaming, and not focus on some “gamers are outcasts” angle. The group of four friends however were treated differently from others as geeks but only Randall’s personal life outside of the group was explored. Their connection through LOTRO was shown and as expected this was also their time to discuss other personal or daily activities. I could appreciate the way this was handled and not just because actual LOTRO game play was being shown but the way the images shifted while they were communicating. It was a cool touch.

This teamwork translates outside of the game as well because even in school where they all share a class they have each others backs. So when Randall is expelled from school and tells them, through LOTRO of course, that he has a photo of (name) planting the weed in his locker, they don’t even think twice about taking the next steps to get him exonerated. Hilariously they want to focus instead on clearing him for the tournament as opposed to getting back in school.

There are some funny moments including the principal (“where there’s smoke there’s fire, where there’s fire there’s pot”) and the flash drive is treated like the one ring, and the stakes are high enough overall to justify the road trip storyline. It’s not just being expelled from school but the fact that Randall’s mom wants to dismantle his computer, which means he wouldn’t be able to play LOTRO anymore, and Randall’s brother is angry about it too and goes so far as to say his father, who was a gamer, was a loser and every gamer knows that story.

Rise of the Fellowship starts off very promising and when the four friends steal, I mean borrow, a car from the school, the LOTR references start to pick up with one of their unknown pursuers being treated like a black rider, and a Gollum like character emerging and following them. I was expecting it to take off even more but it kept on an even keel. They would of course encounter some problems during the early part of the journey but they were also strengthening their fellowship as an attraction between Stacey and Randall continued to grow. There are LOTR references that even casual viewers of the movies might recognize, and even though I saw some of them coming it was still humorous. There are other references and characters who viewers of just the movies might not get such as Baba Melvin, who the group encounters when they run into car trouble. He’s the leader of a group that can be compared to the elves and they have their own philosophy and live the simple life away from civilization. He’s a combination of Gandalf, Tom Bombadil and Celeborn or Elrond but that’s due to the changes in the Peter Jackson movies. So some of these references might be hit or miss depending on what you’re familiar with but it still moves the story along and he is convincing as one to help the group gain “wisdom” about their journey and themselves. It’s not just all talk as there’s some comedic action too involving a paint ball battle for the flash drive and it was a good change of pace.

I was enjoying this movie and the characters in it but a lot of that was due to the fact that I found the Tolkien references amusing, but there aren’t many laugh out loud moments even when the references are understood. There isn’t much change to the status quo of the four in the group outside of Stacey and Randall but that’s because they’re presented as archetypes in a way. There is some slight investment in wanting to see the group succeed in their journey and even though the characters are relatively simple at times they’re still likeable. And when they ultimately do reach the LOTRO tournament it picked up again for me. Of course that had to do with seeing them take part in some competitive gaming but everything that was laid out throughout the movie came full circle, while still remaining true to the everyone here is a gamer vibe. I won’t give away the entire movie since I never do but I felt satisfied with that as well as the way things were ultimately resolved.

Rise of the Fellowship is an amusing movie that has appeal to LOTR fans and LOTRO players due to the various references throughout. The premise of four friends forming a fellowship to embark on a journey to attend the gaming tournament holds up for the most part and the journey itself has some interesting moments. There aren’t too many laugh out loud moments there is still some investment in the journey because the characters are generally likable archetypes. I felt the delivery of some of the references could’ve been handled better by fitting more into the script but there are enough things that happen during the trip to keep it feeling fresh until the end. If you’re one who enjoys or makes LOTR references regularly or relate to LOTRO players then you should check out Rise of the Fellowship.  It’s an entertaining journey that will not only give you a LOTR fix but take you on a ride showing you what honor, truth, and justice means in the online gaming world. Well, it’ll make you laugh because it is an entertaining journey that captures the more light-hearted moments in the LOTR series through the friendship of LOTRO players